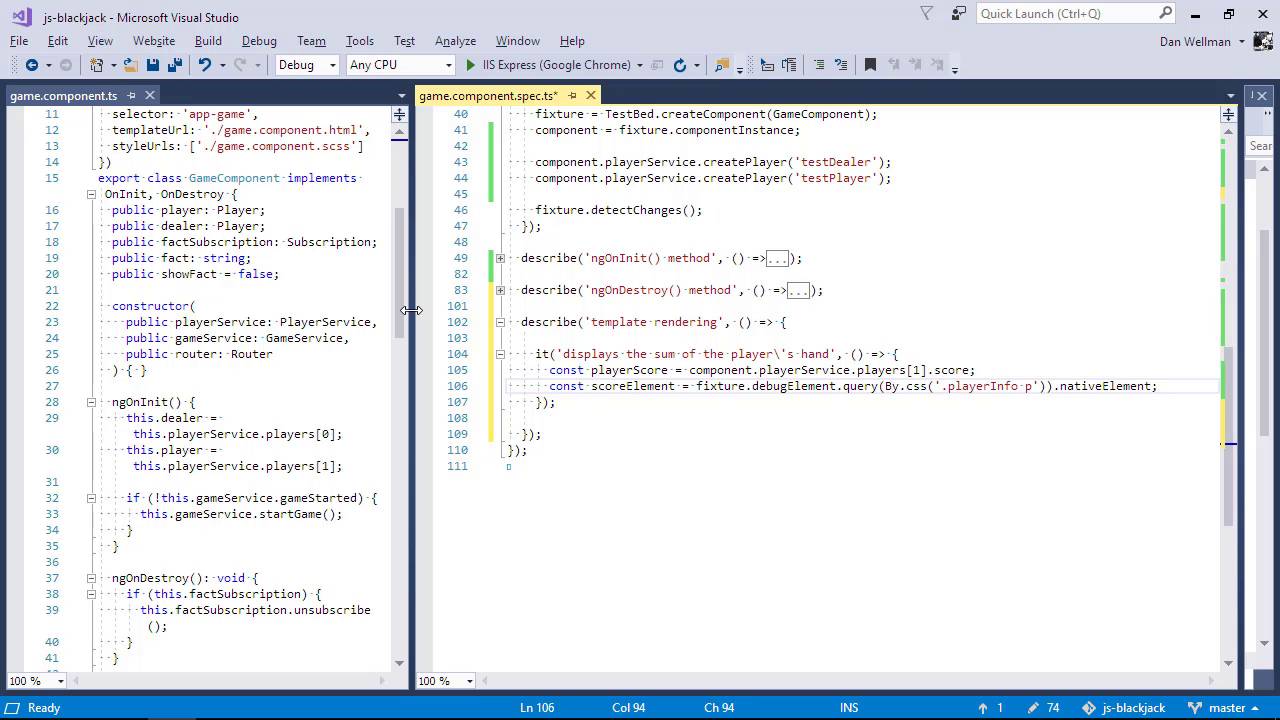 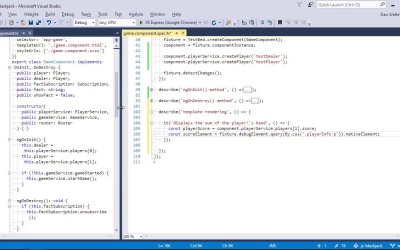 In this lesson you'll learn how we can test the template part of a component as well as the class part. This will let us make sure that the template behaves in the way that it should and renders the data correctly.

Hi, folks. As we know, an angular component is more than just the class that backs it. It has a template as well, probably with numerous bindings and which changes what is displayed in response to user interaction. Is what is testing the class, we can and should also test that the template behaves in the way that we expect. So we already a spec file for the game component and we added a few tests to it in the last lesson. Let's add some more tests now for the template. So one of the things the template does is render the total score of the cards in the player's hand and let's just scroll down, and we can see that the template for the game component has been rendered. So it should be pretty easy to test the rendering of the game component, seeing as it is being rendered in the test. So let's add a describe for all of our template tests. So we can keep all of the template tests in their own describe just to keep the test file nice and organized. With a bigger template or a more complex class, we could split the class tests and template tests into their own files. But to keep things simple, let's just keep them in the same file here. So now, let's test the score first of all. We know already that the fixture variable contains the test harness and that provides tools to make testing easier. One of the things it does is provide access to the dome elements within the template and we can use these to inspect the elements, and check that they contain the right elements or additional dome structures. So first of all then, let's get the player's score. We already initialized the dealer and the player earlier in the course and we did that in that game component file, so we know that the player is the second item in the player's array. So we can just reach into the player service and get the score of the player. So next, we want to get the element from the component which displays the score. We can bring in another angular utility to help with this. The by class allows us to easily select elements from the page using either a CSS selector or a directive. We can use it to select the rendered element from the page using CSS. So we can get the elements which the score is rendered into and we do that using that using the debug element property of the fixture, and that has a method on it called query. So we can pass in a query and that will return an element from the templates. And in this case, the query is a CSS query which we can get using the by class that we imported and we can just pass that a CSS selector that matches the element that we want to get from the page. And then to actually get the inner DOM element, we can use the native element property. So we should now have access to the element that contains the players score in in the template. The paragraph that we've selected which should be within the school element variable now doesn't just contain the actual school, it also includes some text. So we'll need to clean this up and parse it into a number And now, we can test the score that we've extracted from the component is the same as the score of the player. Let's see what the output of this test is and we can see that the test is passed. Another thing that the component does is display the cards in the player's hand. We can also test for this in a similar way. So we do a similar kind of thing as we did before. We get the element that contains the text that we want to test and then we can test that the text has the value that we expect. So in this case, each rendered card on the screen should have text content which says either the queen of hearts or the nine of spades or something like that. So it will say either the name or the value of the card and then the suit of the card. So we can just get both of the cards that have been rendered on the screen and check their text content. So let's save this now and go back to the browser and we can see that this passes too. So we're quite confident now that the template is being rendered in the way that we expect. So in this lesson, we saw how we can add unit tests for a component's template in order to test that the correct things are being displayed when the user interacts with the page. We saw how we can use the fixture API to query the rended content for different elements and how we can use these to check that the correct data has been rended. Thanks for watching.