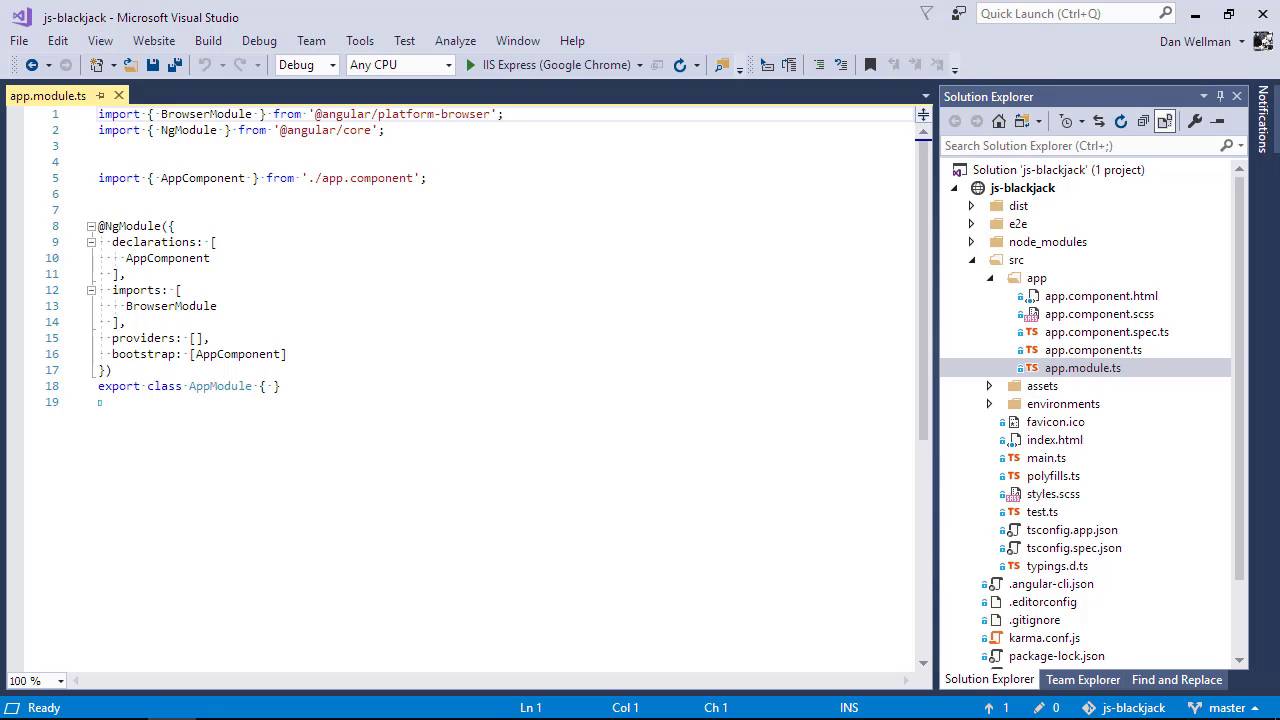 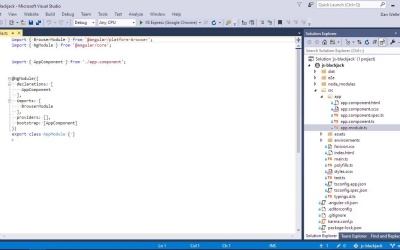 Angular applications are usually built using an NgModule as a container. In this lesson we see what that is and why it is necessary.

Hello folks, in this lesson we're going to take a look at the AppModule. This is the root module of the application, which is the module that gets bootstrapped in order to start the app running. So let's open up the app.module.ts file that the CLI created for us and take a look inside. So this file follows a familiar format with some imports at the top of the file, starting again with some at angular imports. It's a best practice to include these at the start of the file and to separate them from our own internal imports, hence the line breaks between the import statements, although two-line breaks is a bit excessive. We can fix this later. We'll end up importing a bunch more things into this file later on anyway. So we import the BrowserModule from Angular because we're going to be running in a browser and we import something called NgModule. This is actually a decorator, which is a bit like a function. We'll use this to tell Angular that we want to create a module and we pass an object to the decorator to tell it all about the module. This object contains several different arrays, and each one is used to load a different type of thing within Angular. Angular apps are heavily componentized. They are basically a bunch of components composed together in different ways to provide the UI of the application. In the example application, we have the app component. This doesn't need to change. You'll still have a root application component that holds the shell of the application, which is always visible. This is specified using the declarations array in the meta objects passed to the NgModule decorator. The imports array is used to specify other modules that we want to include in our application. This could be built in modules that come from Angular, third-party modules that we've downloaded via npm, or other custom modules that we might have created ourselves. In this case, we just want to use the BrowserModule that we imported at the top of the file. The provider's array is used to include services in our application. Services in Angular 2+ are just like services in Angular 1.x or AngularJS, as it's now known. Services can be injected into components to provide business logic, store states, or to share common functionality like ajax requests between different components. This is empty at the moment but we'll add some services later in the course. Lastly in the configuration object, we specify the root component using the bootstrap array. At the end of the file we export the app module as a class. Again, this is no different from regular JavaScript. Like the entry point main.js, this is a very simple and at the moment very small file which is responsible for defining the shell of the application. This file will change as we build our own application and we add more components and services, but it won't grow in complexity, only in size. So it will still be very easy to manage right at the end of the project. This file defines the root module of the application. In a small application this might be the only module that we need, but in larger applications we are free to create feature modules to help organize related parts of the application into reusable self-contained chunks. So this file defines an Angular module but you should understand that this is different from a regular JavaScript module. The file itself, app.module.js is a JavaScript or ES module because it uses the import and export tokens, but the NgModule decorator specifies an Angular module. So this file is both an ES module and an Angular module. But you should just be aware that there is a difference between the two things. So in this lesson we saw that we use the NgModule decorator to define a module for an application. And in this case, it was the roots module of the application. Don't forget that the CLI creates and configures this for us. This file brings together all of the different parts of the application and makes sure that Angular knows about them. We saw that we can load components, modules and services using the meta object passed to the NgModule decorator, thanks for watching