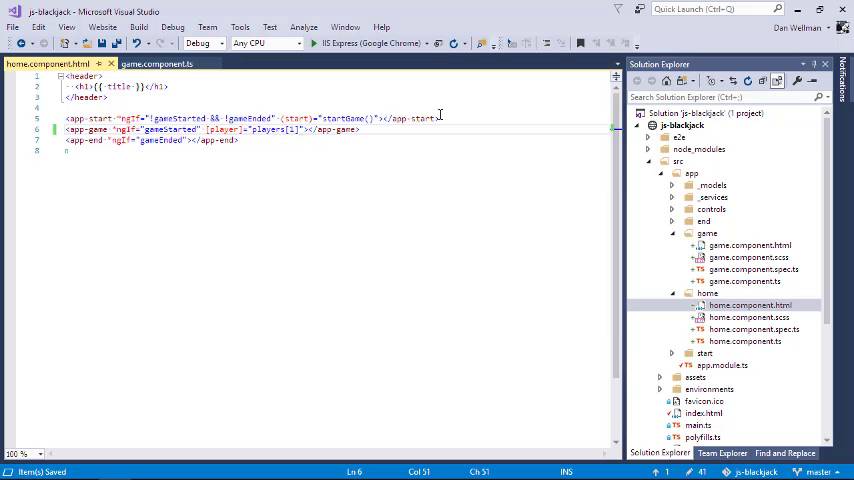 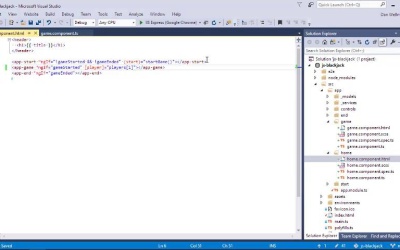 In this lesson we'll see how to pass data into a component from its parent component using an Input decorator.

Hi, folks. Earlier in the course, we looked briefly at inputs when we looked at decorators. In this lesson, we're going to look at inputs from a template perspective instead of from the component's class. Before we get started, however, there's just one slight issue that we need to fix. You might notice if you stop and restart the development server at this point, that the project no longer compiles. And it gives a message about not being able to find a module called Timers. Let's just open up the start component. So a couple of videos ago,we were looking at an example that used set timeout. And when we added that set timeout, somehow this line here got added. I think it was the IDE that added that, but that is the cause of the problem and we can get rid of that. We are no longer using set timeout anyway, and we don't need to import this in order to use set timeout in the first place. So that should fix the issue. And we should be back to where we were. So back to the input decorator. The input decorator is used to specify that data will be passed into a component. At the moment, the gameComponent creates the player itself, which couples the player to the component quite strongly. Instead, we can pass the player into the component. So let's open up the gameComponent. And we'll need to bring in the input decorator. And we can then specify player as an input property instead of a regular property. So now down in the ng on init, we won't need to initialize the player anymore, so let's also get rid of that. And now we can pass the player into the component. We can do that from the homeComponent, as that is where the custom element for the gameComponent is hosted. The syntax looks just like an attribute or property binding with the square brackets, but this time we specified the name of the input property we are binding to within the square brackets. The template expression on the right points to the property of the host component that we want to pass in, which in this case is the second item in a property called players. So let's make some changes to the homeComponent class. We can add players as an array at the top of the class. And now we need to make a few changes down in the ngOnInit life cycle method. So we can get rid of these local players variable, and we can update the references here to say this.players. Let's also move the creation of the second player down into the start game method, because we won't know what the players name is going to be until after they've entered it into the imput in the start component, We'll keep the hard coded name for now. We'll worry about getting the actual players name at some point alter in the course. And let's go back to the game component again, and let's get rid of where we create the deck and shuffle it and do the dealing here. Because that is already happening in the home component. What we can do though is just make sure that the player is being parsed in correctly and we can add a console log for that. So let's now start the game And we can see that the player is being logged. So that means that the player is being passed into the game component, rather than the game component creating it itself. So the game component is now much simpler. We're passing the player objects that the game component needs into the component, rather than having the component deal with creating this object by itself. And let's just recap the input syntax. We've already seen the input decorator, and this gets applied to a property of the class. And that property then becomes a public property. So the property that we're binding to in the component that receives the object being passed in happens on the left hand side within the square brackets. And on the right hand side, that is the property that we are parsing in from the hostComponent. So the first item in the player's array is being passed from the homeComponent to the gameComponent via this input binding. So in this lesson we saw how we can use an input property to pass data into a component. We saw that we use a familiar syntax to bind to the input property of a component from the template in which the component is hosted. And that the data we want to pass in is specified as the template expression on the right hand side of the assignment. Thanks for watching