Utopian Mining is one of the most polished RPG digging games I've played on the web in some time. It does so much right that it stings horribly when you do come across its few faults. My expectations were set high after seeing the excellent scores on Newgrounds and playing for a few moments, but I quickly learned that the game wasn't all my hopes had wanted it to be.

My high expectations aside, there's a lot to be learned from this wonderful little (emphasis on little) game.

The object is simple. You're a tiny mining robot hanging out in a town that was recently destroyed by a horrible storm, and you need to collect materials while digging to get the town up and running again. There's been a decent number of games in this genre over the years, and they've always done quite well in the eyes of players; quite well for sponsors too seeing as they continue to get sponsored by large sites such as Newgrounds and Kongregate. There's definitely some concrete evidence as to why they do so well, which I'll go over shortly.

Utopian Mining doesn't really mix things up too much from your standard RPG digger, but it does add a few (extremely linear) quests, as well as a bit of story. Quests generally consist of giving someone money or a certain material, all of which is laid out in the exact order you would achieve if said quests didn't exist, making the quests more of an illusion than anything.

The game appears to be a lot more content filled at first, especially when new buildings rise as you complete quests, and you learn of a beach far to the east, but it quickly becomes apparent that these changes hardly affect gameplay and are mostly visual fluff. Buildings give a small discount in restoring power to your robot, and the beach is used to get sand for a quest just once (yes, once). This visual fluff is of course a welcome addition, especially in the eyes of sponsors, but I fear that these quests will quickly feel shallow to the average player, leaving them with a desire for just a bit more depth. I would have loved to see quests be less linear, and to have them alter how the game is actually played. Unlocking new upgrades in the shop would have been great incentive to complete a difficult, and not immediately rewarding quest. In addition to these faults, the player also isn't alerted when a quest is complete, which seems like a no-brainer for an otherwise very polished game. 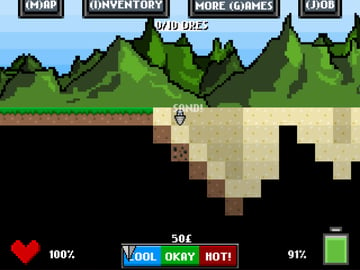 The largest flaw of the game is that it's so simple it becomes ridiculously easy to complete. It's so unbalanced, that if it wasn't short, slightly addicting, and quite charming, it would likely fail to be a decent game. Many players, such as myself, often skip cheap upgrades, and save up for the next reasonable purchase. This may take an extra five or ten minutes to do early on in the game, but it generally pays off. The same is true for buying equipment in games such as Final Fantasy, or really any game that offers an upgrade system of some sort.

The problem with Utopian Mining, is that it doesn't only pay off - it actually destroys whatever challenge may have ever existed. I beat the entire game within an hour, and wasn't remotely challenged beyond the first five minutes; in fact, my robot never even died. Generally speaking, the challenge of a game should increase as you go on, but Utopian Mining simply gets easy, whether you skip upgrades or not. Schulles (the developer) simply didn't pay enough attention to the balance of the game, and it unfortunately reared it's ugly head for me, and from the looks of other reviews, many other players.

Close to death, but never in any real danger.

While casual gaming is fun, it's important to challenge players, or at least make them feel like they completed something difficult, even if “difficult” simply translates to time consumption (a common tactic of MMORPGs). While I don't want to write out a game design document in this review, a simple addition to make the game more challenging would have been more hazards, such as lava pits. As it is, going deeper and running out of energy are the only things that can kill you, and that obviously doesn't really work.

One of the more minor flaws, in my opinion, is the rather clunky user interface. For an example, let's look at the shop screen:

To navigate the shop, you must press 1-4 to switch between categories (chassis, drill, batter, cooling liquid), use the arrow keys to go up and down, X to select, and C to exit. I love retro games, and I'm all about ditching the mouse when it really isn't needed, but this wasn't one of those times. There's no reason to neglect the mouse for a simple shopping interface, especially when it would be faster and less frustrating to use for the player, and could work alongside keyboard controls as well. There's no reason to annoy your players because you feel like being truly retro; give players an option, and both casual and hardcore players will be happy.

While Utopian Mining has its flaws, as almost all games do, it does a lot right. It takes everything you'd expect from an RPG digging game, strips it down, and polishes what little it has to an extreme. It's basic, but it's addicting, and for any game developer, that's a good thing. Getting players to return to your game is not only great for increasing views, but it also helps developers gain more recognition, and both sponsors and developers will earn a decent bit more revenue, assuming the developer put ads such as Mochi or CPMstar in their game. 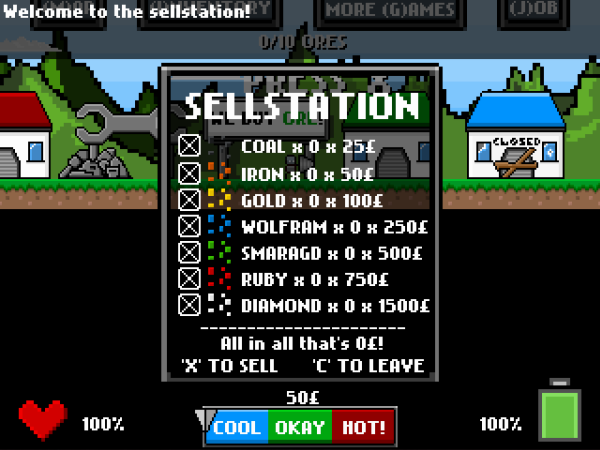 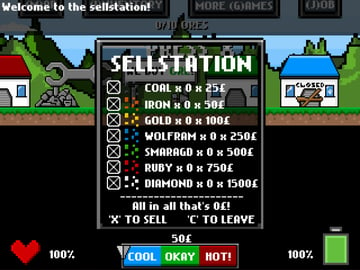 The unfortunate side to this, for Utopian Mining, is that the game isn't quite long enough to ensure a returning play from most players, as it's generally beaten in the first sitting. As far as the core mechanics go, they're addicting. The game lacks any sort of real depth (aside from the digging bit [that was a terrible pun - Ed.]), but that aside, players seem to get addicted, and want more. The core mechanics of the game are undeniably an extremely strong point, and seeing them presented in such a polished manner has appeared to be an easy win for game developers.

I've said it before, and I'll say it again: I absolutely love retro and retro-inspired games. Utopian Mining offers some very nice looking retro graphics, which instantly earn my approval. The world is charming on the surface, and while a bit bland below, it's done well enough to please the eyes. The animations are extremely simple, but they get the job done, and there's no need for more. 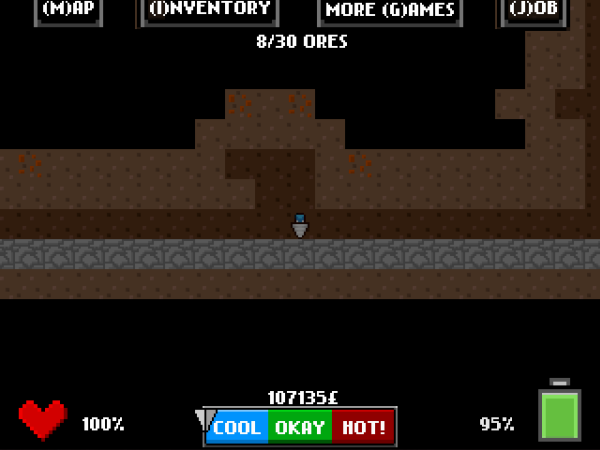 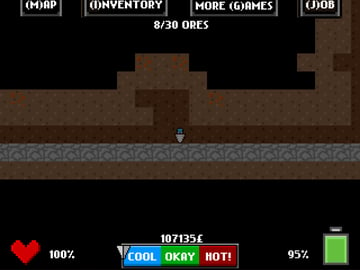 As far as details go, the game doesn't skimp out, and there's actually a decent attention to detail. The ground gets darker as you go deeper, digging has a cool particle effect of dirt flying out, and warnings appear in a simple, but cool fashion across the screen. Overall, the graphics are top-notch for a retro-inspired style, and I wouldn't change them a bit.

The audio is also extremely well done in Utopian Mining, and has very little room for improvement. The music on the surface is excellent and charming, which sets an immediately positive mood for players. Upon digging and going below the surface, the music instantly changes with a nice fading touch, which is a great addition.

Sound effects are nicely done, even if a bit simple. I would have appreciated some variation when collecting different materials, but that's a minor piece of polish the develop chose not to include. All in all, the sounds are quite fitting, retro, and very well done.

Utopian Mining is undeniably a great game, it's just a great game that has been done before. What I appreciate most about it, is that it takes the core mechanics, leaves behind the extras, and makes the game shine nonetheless. It's an excellent game for developers to study, as there's very little to it, yet it's quite successful. I know my interest has been piqued by it, and I plan to explore development in the genre myself. All in all, Utopian Mining is a charming and simple game that can pass some time for the casual gamer, teach some important lessons to game developers looking for them, or both.

What do you think of Utopian Mining?