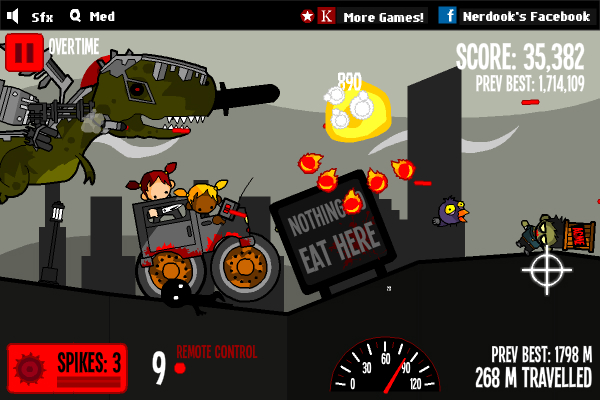 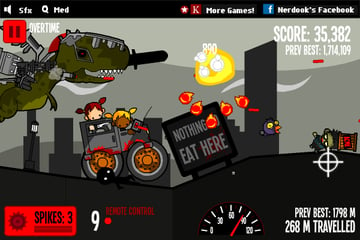 With 2012 moving along, it's no surprise that we're starting to see more and more "end of the world"-themed games. Nuclear Outrun is one such game, and while it's not perfect, it's quite enjoyable. It combines physics, zombies, distance, and upgrades, in a simple, yet enjoyable blend. With only one goal - get to the goal before the nuke hits - players really can't get too confused by what's going on.

As I mentioned above, your goal is simple: reach the goal before the nuke hits and turns you into a smear on the streets. You simply press forward (drive to the right), and shoot what gets in your way. You have 20 trucks (attempts), and with each attempt, you earn experience points which unlock new weapons and reward you with skill points. These skill points can be spent on upgrades, such as cranking up the power and ammunition of your weapons, making your vehicle more beastly, and so on. 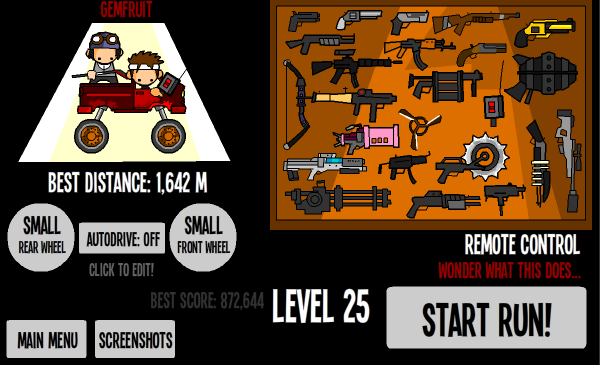 Nuclear Outrun definitely repeats some of the mistakes common to the distance game formula, but it also succeeds where many others have failed. While you start off weak and slowly grow strong, you're not entirely crippled by your starting state. Many distance games start you off so weak, that you hardly play the game for the first ten minutes or so, but instead repeat the same simple run over and over, slowly gaining stat points. There is a certain degree of skill in Nuclear Outrun, and you can do well right off, which many other distance games sadly fail to allow. In fact, you can actually complete your goal without getting every upgrade, something most distance games don't allow. Doing so makes the game feel extremely linear, gives the player little satisfaction upon completion, and offers zero replay-value. I do wish skill was even more of a factor in Nuclear Outrun, but the leveling up aspect is simply part of the genre; at least it's a step in the right direction.

While the game does use a physics engine, the controls do feel a bit off to me. For whatever reason, I found it far too common that the vehicle was tipped on its back. Even with the ability to adjust individual wheel sizes (such as a large wheel in back, small wheel in front), it was just too easy to end up with your front wheel raised to the sky. This leads to a decrease in the sense of speed (read: fun), and forces players to spend more time balancing their vehicle, rather than focusing on the more enjoyable aspects of the gameplay, such as shooting enemies. 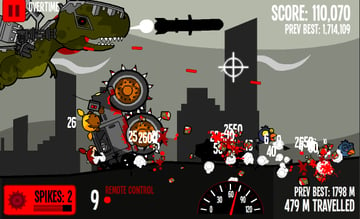 What Nuclear Outrun does best is give the player complete freedom to choose how they want to play. You choose what weapon you want to use, how your vehicle handles (via wheel sizes), and what upgrades to put your skill points into. When you're actually in the game, it's up to you whether you want to fly forward full speed, or play it safe at a normal speed and take out all the obstacles.

While we're on a positive note, it's also worth mentioning that Nuclear Outrun does a fantastic job of rewarding the player. Even after you complete the game, you get three new weapons, all of which are unique and fun. You're also rewarded with “Overtime” mode, which allows you to continue playing while competing for high scores. Nearly all web games, huge hits included, fail to reward players after the game is “completed”. It's extremely important that you give players something extra to reward them, as it increases replay value, and lets the player know you care. Simply saying “Congratulations!” on your final screen is insulting, and doesn't help you stand out.

The graphics in Nuclear Outrun are pretty average. They have a simple yet effective style, but I personally find the whole package a bit unpolished, and lacking in detail. There's a lot of weapons and effects, so it's understandable that each one isn't in extreme detail, but there's definitely room for improvement. The animation is simple, but like the graphics, it's quite effective. Nothing really stands out as poor; it's just nothing pretty. 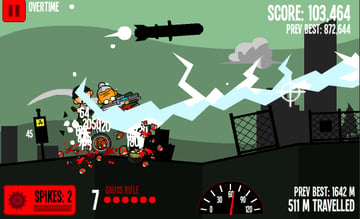 The menus and UI in my opinion are a bit too messy. There's a lot of stray or unorganized text, which leads to confusion as to what information is where. The pre-game menu could be greatly improved by moving the level and high score elsewhere, and perhaps making it a bit smaller. All of the text is also just thrown on screen, and isn't placed with any artistic value. All in all, there's just too much text, with little thought into how it's displayed, and it looks messy. 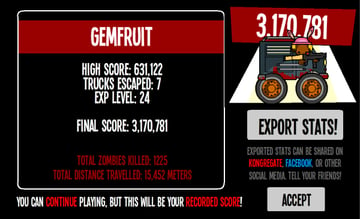 The audio in Nuclear Outrun is quite awesome. The main game doesn't have any music, but has a simple, but awesome ambient track. It definitely adds an apocalyptic feel to the game, and I think it fits better than music could have. The loop on the ambient track isn't perfect, which could be fixed with some minor tweaking, but it's not too noticeable during gameplay with all the sound effects going on in parallel.

As far as the sound effects go, they're just as good. Dying is almost enjoyable, due to the sound of the nuke going off and the awesome scream that follows. All of the sounds appear to be unique to the game, which is always a plus. The sounds for zombies such as dying, upgrading, etc, are all very well done, and really couldn't be any better.

Some of the interface buttons are inconsistent with playing a sound, and it would be a lot more professional if they all did. It's a minor fault to not have a simple sound play when pressing a button, but it really does take away from the full experience of a polished game.

All and all, Nuclear Outrun is a very well done physics, zombie, distance, and upgrade game. All of the above themes and genres are extremely popular with sponsors, so it's safe to assume that Nerdook didn't have a problem selling the game. While there's definitely room for improvement, I can't name any games that take the above genres and put them together any better, so kudos to Nerdook for that.

What do you think of Nuclear Outrun? Leave your constructive criticism in the comments.

And if you’ve got a browser game that you’d like the Activetuts+ community to do a critique on, submit it here. We’re looking forward to seeing what you’ve made.