Workshop: Keeper of the Grove - Critique

In today's game critique, Matt Porter takes a look at the new hit tower defense game, Keeper of the Grove, developed by BooblyC.

Tower Defense games have always been a popular genre, especially for the casual / web demographic. This popularity has lead me to playing some pretty amazing Tower Defense games, as well as some horridly bland ones (with more of the latter, unfortunately). I love any game that's easy to play but hard to master, and a good Tower Defense game is just that. Needless to say, when a well developed TD game comes along, I'm all for it.

You can play the game at its full size here.

While many Tower Defense games look great, the majority of the non-amazing ones fall flat on their faces due to bland gameplay. It appears to be a popular recipe to use the absolute basic form of a Tower Defense game, and to then polish the hell out of it. Unfortunately, gameplay has, and always will make a game, so extreme polish alone can't do even this genre any justice.

Fortunately, Keeper of the Grove is not only extremely polished, but also pretty well stacked in the gameplay department. It has some serious balancing flaws, in my opinion, but it builds well upon the basic recipe of a Tower Defense game.

Units can be upgraded, and can even branch off into new units as you progress throughout the game. The game uses a “Wisdom Tree” upgrade system, which is where you must first pay to unlock the ability to have each specific higher level unit (within each map, not just once). To my knowledge, this was first seen in the hit Android game “Jelly Wars”, although it could quite possibly have existed long before.

This system creates a level of complexity where players must balance spending between getting higher level units right off, or taking a slow and steady approach. In addition to the upgrading of units, each stage awards up to three skill points, and unlocking achievements grants additional skill points. These can be spent as you please on upgrading the different types of units, and can even be reset if you'd like.

One potential flaw to this, is that players can reset and customize their skills for each stage, which detracts from the developer's balancing of the map. It's not a horrible flaw, and it's one that doesn't necessarily always get spotted and abused, but it's definitely something to consider when developing similar systems in your own games.

There are three major flaws with Keeper of the Grove, in my opinion.

The first is that there's a little too much luck involved for a game that should be obsessively balanced and rely mostly on strategy. Keeper of the Grove includes a magic system that allows you to use spells on foes - a nice addition one would think. While these magic spells are very neat, and fun to look at, they severely hurt the balancing of the game. Spells are dropped at random when enemies are defeated, and what spell you get is random as well.

The spells are actually quite powerful, so having one is a game changer. Perhaps you want to pull off a poison tower within the first few waves (an upgraded, rather expensive unit). Quite often, this won't work - that is, unless you get an item that helps throw the odds in your favor. Once this happens, you've got an early powerhouse setup, and there's really no way for you to lose.

To emphasize this as a weakness, even the official video walkthrough shows the player using magic spells early on in levels, thus giving them an advantage that viewers could not replicate without extreme luck.

I like the magic system; I just think it should be less up to luck, and more controlled. A possible solution would be to show the player how to achieve getting a magic spell, such as by killing X enemies, or surviving Y rounds without losing a crystal. These sub goals would make gameplay interesting, and ensure that magical spells are still in the game, but in a controlled manner. I came up with this system literally as I typed this, so there are obviously better ways to handle the magic system than what made it into the game. 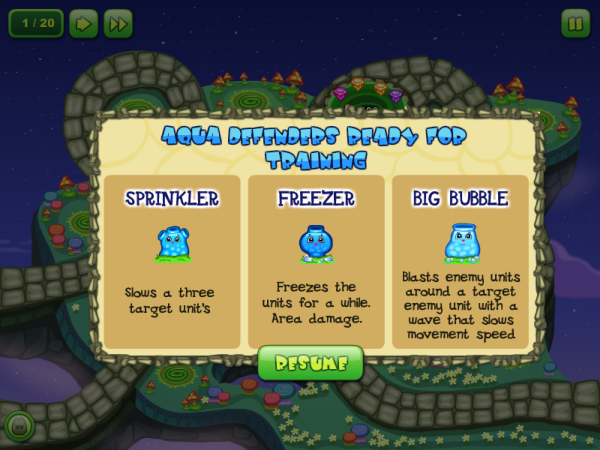 The second flaw, in my opinion, is the design of the tutorial levels. The first few levels introduce new units, and don't allow you to upgrade many. This is fine, as introducing new elements slowly is highly encouraged in game design, but I dislike the way they go about it.

I'm forced to use Unit X in a level, but the level isn't really set up in a way that's perfectly clear about how this new unit is beneficial to me, and in what scenarios. If you're going to limit the player to using certain units, for the sake of a tutorial level, it should be very clear (especially to a veteran of Tower Defense Games) how that unit should be used in that level, and what its role is.

I also found the number of waves for the tutorial levels to be a bit high. I don't want the game to be short, but 20 waves on level four - a tutorial level - seems a bit too long. You want to speed things up at first, and show the player what awesome features your game has to offer. Slow things down too soon, and they may never experience what could have been your hook.

The last major flaw in my opinion, is the difficulty curve. Myself and many others reported that the difficulty spikes up pretty early, and out of nowhere. I personally found that the difficulty jumps greatly in level four. It wasn't unbeatable, but there were new elements and units introduced, and perfecting it seemed nearly impossible (without getting upgrades and returning later) compared to the previous three levels.

With so much more of the game yet to be exposed to players, I think it's extremely important to be careful about easing players in. I hadn't even seen all of my units yet, and I was already faced with something I found to be pretty challenging, and slightly unfair (due to getting magic spells or not).

As far as gameplay polish goes, there's a lot. The game builds far beyond the original recipe of Tower Defense games, and gives the player a lot to work towards. There's a nice collection of awards to unlock (achievements), all of which also grant bonus skill points when achieved. In addition, the game also awards a final level that is only obtained by getting all the achievements. Tying these all together is an absolutely fantastic idea, as the player now has incentive to gain achievements.

The game becomes potentially easier through the awarded bonus skill points (a chance for struggling players to catch a break), and the average play time of each player is likely increased as they attempt to collect all these achievements to unlock that final level. The game also offers a hard mode from the start, which will likely provide any Tower Defense veteran with a nice challenge. Last but not least, there's a nice looking bestiary for you to slowly unlock with tower stats, enemy stats, and so on - all viewable from the pause menu: a very nice addition.

The graphics in Keeper of the Grove are absolutely perfect. No shortcuts were taken in the making of the graphics for this game. They're cute and casual, extremely polished, and full of charm. Menus are simple and clean as far as navigation goes, but they too are on par with the high quality seen throughout the game. Particle effects add great value to many of the animations, but aren't overdone. Everything that should be animated is, including interfaces and screen transitions.

While the cute style may not be for everyone, there really is little room for improvement graphically. As far as casual web or mobile games go, this is the level of visual polish that developers should strive for.

Much like the graphics in Keeper of the Grove, the audio is extremely well done. It's clear that the music was professionally made, specifically for this game, and not just grabbed from a random stock music site.

The music compliments the mood of the game by being quirky, charming, and upbeat. It's exactly what the developers were looking for, and that's exactly what you get when you hire a professional to do this kind of work. Many people skip out on professionally done music, but I know from personal experience that it more than pays off, assuming the rest of your game is of a quality that warrants such a thing.

The sounds effects are of equal quality and style. Everything has a sound, and the project as a whole feels very audio-complete. It's clear to me that the developers know how to polish a game, and the audio backs this thought up.

While Keeper of the Grove isn't going to break any records or earn too many hardcore fans, it is indeed a perfect example of a remarkably polished game. The game is visually and audibly exactly what players and sponsors alike want, which is a very good thing to take note of if you plan on pleasing both parties any time soon. The gameplay isn't groundbreaking, but it is well done, and enjoyable.

All in all, it's far above your average web game, and that's not due to luck, so do yourself a favor and take note of what worked here and what didn't.

On another note, it might be worth debating whether a game like this is worth polishing to the extreme, or if an original game idea would be a far better use of the effort that went into these amazing graphical and audio assets; what do you think?