This week, Matt Porter critiques Jelly Escape, a popular new platformer developed by TawStudio Entertainment. Platformers are a dime a dozen on Flash portals, so let's see what this one brings to the table... 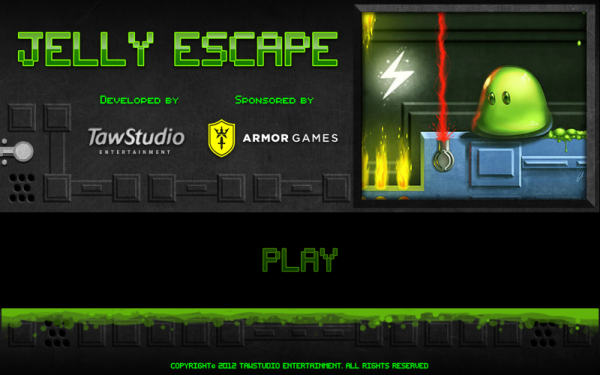 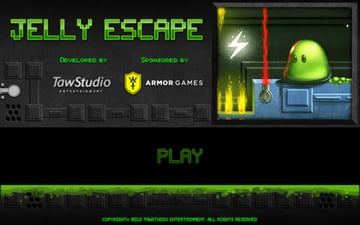 Play the game at full size over on TawStudio's site!

The web has always had an abundance of platformer games, thanks to Flash. Unfortunately, most of them lack any kind of serious polish. Fortunately, Jelly Escape isn't one of them; it's an incredibly well built platformer, and it's clear that the developers did their homework and studied industry hit and obvious inspiration: Super Meat Boy.

Jelly Escape's main focus is simple, quick, addicting platforming, and achieves this quite effectively. The game has a number of tricks up its sleeve to engage the player beyond the first few minutes, and the overall level of polish means players are likely to stick with the game long enough to get to that point.

The most immediate, and engaging aspect of the game to me, is the retro feel. While there has been a surplus of retro-inspired games since the introduction of great Flash game frameworks such as Flixel and FlashPunk, most don't take that retro-magic to the same level. 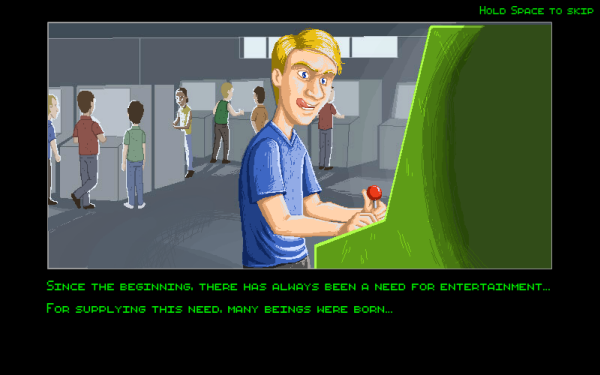 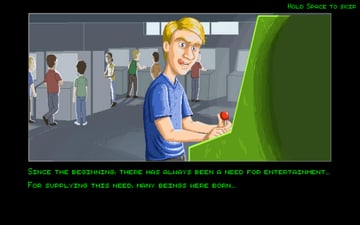 As soon as I saw the opening animation where quarters were being popped into an arcade machine, I was hooked. Even if you're not a hardcore fan of classic gaming, the added story is a very welcome addition, and is sure to please most.

The second thing I noticed and was impressed with in Jelly Escape was the sheer number of levels the game had to offer. As soon as you start the game, you can see that there at least 60 - that's a lot of levels! These are split into four sections of fifteen levels each, so I was pretty convinced that variety wouldn't be an issue. 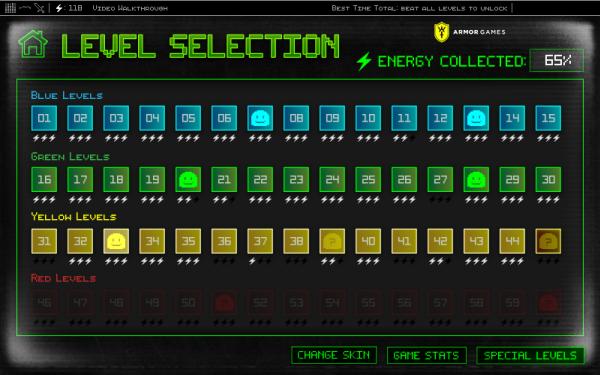 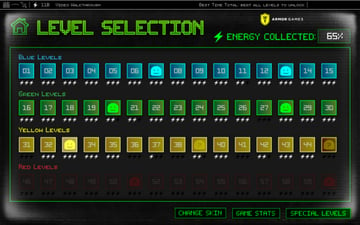 While I do love the sheer number of levels offered, I do think all great platformers should have a world map of sorts since, to me, exploration is one of my favorite aspects of gaming. Not only is arranging 60 levels as boxes with numbers a tad boring, it straight up tells you how many levels there are, and doesn't leave any mystery for the player. I personally love unlocking a new world when I think a game is about to be complete, and this setup just doesn't allow for that.

Another possible negative aspect of telling the player how many levels there are, is that they may find themselves slightly bored part way through your game and, knowing they're nowhere near the end, just stop playing. If they thought that they might be nearly finished, they might just stick around another few levels to finish it up. During this time they may become bored and leave anyways, complete the game, or they might just hit your next big game mechanic that adds a breath of fresh air into their gaming experience, keeping them around that much longer. 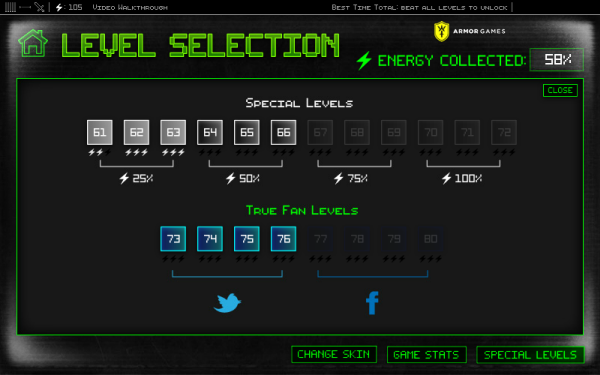 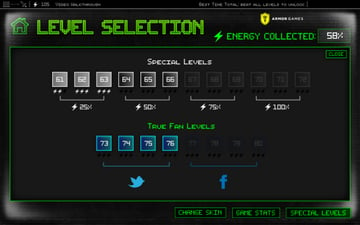 There are a few levels that can be unlocked through your actions...

A proper compromise to having a full blown world map, versus a simple menu setup, would be to unlock new sets of levels upon the completion of a previous set. Jelly Escape has four sets, but perhaps only one needs to be seen at first; the unlocking of the others could have been used to spice up the player's experience. Even if my love for exploration isn't shared by all, it's important as a developer to understand the various experiences that any gamer enjoys, so that you can be sure to fit in as many positive experiences as your game's design will allow, and please as large an audience as possible.

One of the strongest points of Jelly Escape is how much - and how often - the player is rewarded. Some of these rewards are given by playing the game well, while others are a bit more creative and are rewarded for completing actions such as following the developers on Twitter and Facebook. 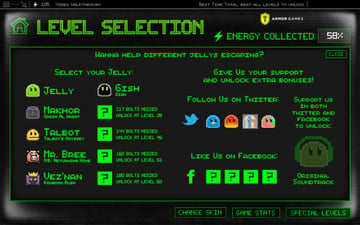 While I'm generally against gimmicks, the unlockables are purely bonus material, and truly don't take away from the game if you pass them up - so no harm done. It's actually a great move on the developers part, and I'll probably use it myself in future games, as I like their implementation.

In addition to the unlockables, the game also keeps track of a ton of stats, such as your best times and lowest death count for each level. Small features like this make for great replay value, and add a lot to the game. 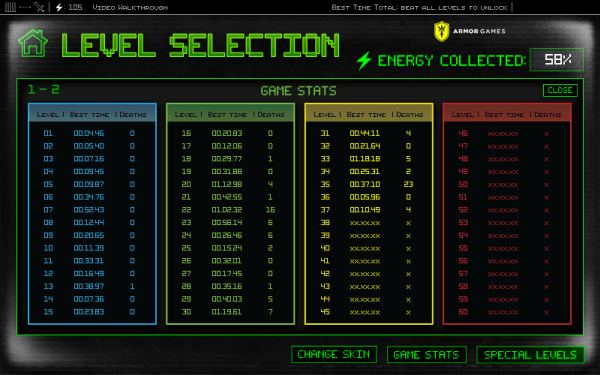 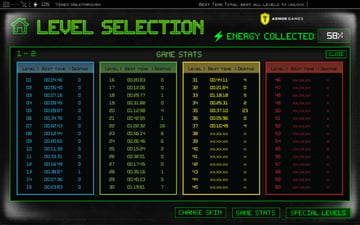 Like many games of this style, Jelly Escape keeps track of how many of a certain collectible you get in each level. This information is shown on the level select screen, and is easily to understand. Unlike certain games, this rating actually matters. Far too many games will give you a “3 star rating” system of sorts, just for the hell of it, with no real incentive for the player to go back and master levels, but Jelly Escape offers two incentives to collect the energy bolts.

The first, which is my favorite, is that you can find characters locked up behind a gate within select levels (as shown on the level select screen), and if you've collected enough of the energy collectibles, you can set them free. Once free, you can use their appearance as your jelly's skin, which is a pretty awesome addition, especially since some of the skins are based off of characters from other popular games.

The second, is that collecting enough bolts will unlock additional challenge levels. I played a few of these myself, and they definitely had an “unlockable level” kind of feel, much like the “secret” zone found in Super Mario World. Between these two awesome incentives, I definitely felt encouraged to replay levels, rather than to just rush through the game.

Level design is a strong point of Jelly Escape, as it should be with any platformer. There aren't too many mechanics in the game, but what's there is used very well. 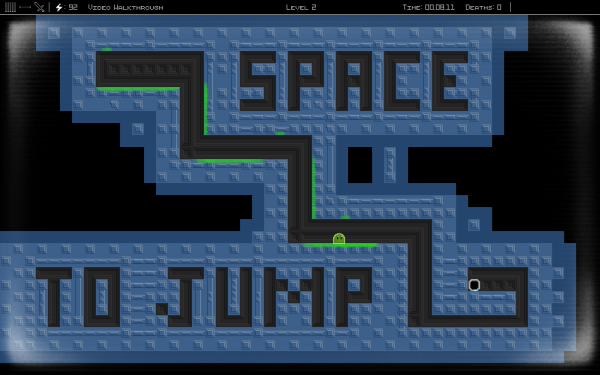 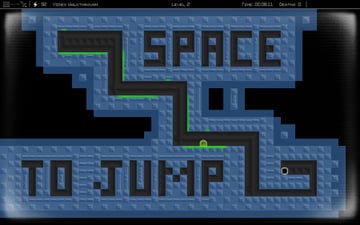 I never found the level design to be too repetitive or bland, and was actually impressed with the overall diversity. In addition, the difficulty curve seemed to be rather balanced, as few levels stood out as too hard, but it did feel like the difficulty was slowly climbing. To make things even better, levels are littered with checkpoints so that death isn't overly punishing: an excellent addition that makes this game far more friendly with its casual target market. Plus, I never encountered any levels that were strictly tedious and not fun.

While the level design is quite well done, some core design choices of the game do take away from the overall fun factor. The game has a rather zoomed out feel, because all of the levels are presented within a single screen. While this seems to be accepted among many platformers, I feel that a more zoomed in view, with a camera for scrolling, is the better approach. To me, this allows for more precise movement, and gives a hint of exploration during gameplay, as you can't see everything at once. 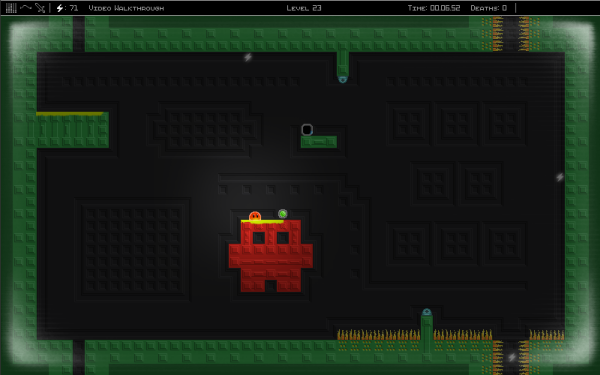 On the other hand, the game design often requires the levels to fit in a single screen - for example, falling through the bottom of the level simply brings you back to the top, and some levels are designed around this - so perhaps this is just a matter of my preferences getting in the way.

I will note that Super Meat Boy isn't limited to a single screen however, and I feel that if it had been, it would greatly deter from the experience. Perhaps this was a deliberate design choice, perhaps scrolling levels were simply a technical complexity the developers didn't want to mess with; either way, I still feel a more zoomed-in experience would benefit the game's design.

The graphics in Jelly Escape are retro, but kick things up with with massive attention to small details in visual effects. Touching walls covers them with your jelly's slime, and spits out particle effects. Dying makes the edges of the screen tweak out. There's a neat lighting effect in place where you can see better around your character, and collecting energy within a level increases this effect significantly. 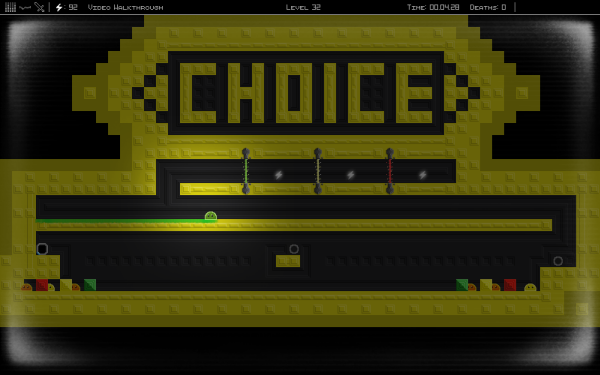 The game is also very animation complete, something that is often lacking in indie platformers. The player is excellently animated, energy collectibles are animated, springs are animated; everything that should have an animation, does. All menus are very clean, and all menu items have a hover effect, which makes for a very polished game. While you may think that menus are nearly worthless in a game as simple as a platformer, retaining a polished and positive image consistently throughout the project is extremely important. If you're not willing to polish your audio-mute button, don't bother polishing your enemy animations, as a lack of consistency breaks the entire image.

All in all, the graphical quality of this greatly excels because of the extreme attention to small details. No single effect is a game changer on its own, but together, they make this game look ten times better than it would without them.

While the audio is nothing amazing in Jelly Escape, it's still quite well done. I find the music very fitting to the somewhat dark and ominous atmosphere, and I personally feel it's a very good fit.

As was the case with animations and effects for grpahics, Jelly Escape is extremely complete in the audio department. There's sounds for literally everything. Jumping has a sound, landing has a sound, enemies hitting walls, opening gates, hitting buttons, dying, hovering over menu items; everything in the entire game has a sound, as it should be.

To further add polish, the toggle music and sound buttons are pretty awesome looking too. Each is its own small audio visualizer, which I found very neat. This is most definitely not needed, but if I noticed it, others did too, so take note of the positive effects such features can have on a players mode, and how it can effect their perception of an author's hard work.

Jelly Escape may have its flaws, but I haven't played a web platformer this polished and addicting since MoneySeize, and those were great (albeit somewhat frustrating) times. 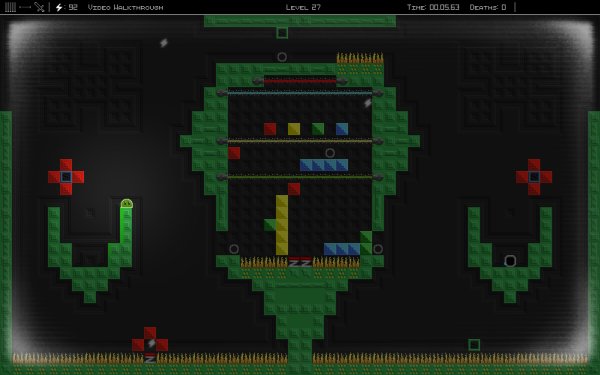 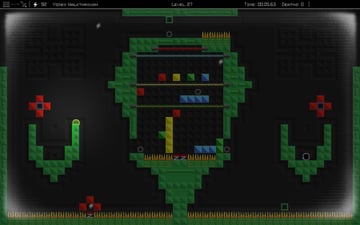 Jelly Escape doesn't take many shortcuts. A ton of unlockables, a huge array of levels, and badges on Kongregate make the addicting qualities of the game shine brighter than ever.

I definitely plan on revisiting the game to finish up those last 30 levels or so, as I'm a sucker for platformers; how far did you play before losing interest?