In this week's critique, Ashish Bogawat gives us a detailed rundown of Google Calendar - specifically, its web-based front end.

When it comes to web based calendar apps, pretty much the only name worth mentioning is Google Calendar. A number of contenders have taken a swipe at this category of apps over the years, but they have all either died off or metamorphosed into broader roles like project management or event planning. Google Calendar, meanwhile, has held on to its roots as a dedicated calendar app and has prospered into a ubiquitous web app - with some help from Gmail and Android. Its direct integration with the popular smartphone operating system and email service means it will continue to hold its top position for a while to come.

But what I want to discuss today is purely the web-based front end of Google Calendar. If you have been using it for a while, you will no doubt have realized that the app hasn't changed much over the years. In times when design trends and standards are changing at a breakneck pace and everyone is feeling the heat to stay ahead of the curve design-wise - including Basecamp and a whole bunch of industry leading web apps - Google Calendar has stagnated as far as its UI goes. Let's take a look then at how (and whether) it manages to stay relevant.

The Google Calendar interface is not unlike most other Google apps - minimal, flat, low on visual hierarchy and decidedly under-designed. This is a good thing in some cases, bad in others. On a positive note, the interface brings pretty much everything you expect to see in your calendar right on to the surface.

To the left is a mini month calendar, a list of your calendars, and a pretty visible button to add an event. A predominant portion of the rest of the space is taken up by the actual calendar with events neatly marked out on dates or time slots depending on the view you choose. Flipping between a day, week, month or agenda view is simple and straightforward.

Hitting the arrow next to the "Create" button brings up an input field to quickly add an event with natural language meta data. So typing in "Meeting with john@doe.com at Central Park next Monday 4 pm" actually adds an event for the meeting with John Doe as an invitee, Central Park as the venue and 4 pm the next Monday as the time and date.

This can be a huge time saver, if you do use the web interface to add events. A big chunk of users don't. Thanks to its integration with all kinds of apps and platforms, there are numerous ways in which events can go into Google Calendar, so I usually use it only as a dashboard of what my days look like time-wise. There are some nice touches on that front as well. Click an empty part of an event box on the calendar and a popup will appear with some more details. Hit the event text instead and you are taken to the event page with everything you might want to know or edit about the event. 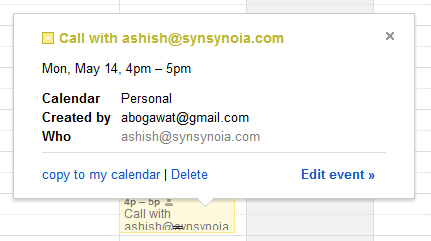 Built for the Savvy

Google Calendar's all inclusive, flat interface also proves to be its biggest flaw, depending on what type of user you are. Although the app can feel extremely intuitive to regular, savvy users, it can actually feel extremely overwhelming for first timers. There is simply too much on the screen with little differentiation and visual hierarchy built in to segregate important elements from secondary ones. The virtual lack of icons also doesn't help here.

The interface is also not always very self-explanatory. Here's an example: when creating an event, there is an input field labeled "Where". It is not immediately apparent what the ideal contents of this field should be. It was only when I once entered a US address in the field that I realized that Calendar will automatically add a link to the map of the venue when it recognizes the content. Till that point, I used to simply type "conference room" or "skype" in the field oblivious of it true potential.

Google's new header doesn't help matters much either. Sure, you might search for events in your calendar once in a while, but the huge emphasis on the search bar blocking off a big chunk of real estate is not going to make you use it every time. In my 8-10 years of using Calendar, I don't for once remember searching for a task. I typically need to look at what's coming up in the next few days and the work week view is always enough for that. For longer term goals, there is always the month view.

Then there are the minor UI niggles that abound in all Google web apps. The "Save" button when adding an event is at the top, which means I need to scroll all the way up after finishing entering my details in order to save the event. The sidebar in an events detail page is super confusing with little clarity on list of attendees, adding people, etc.

In the end, Google Calendar is a one-of-its-kind-surviving web app that gets the job done pretty well. Sure, you need some getting used to is and often an engineer's degree to figure out everything the app can do for you, but it is usually simple enough for new users who are willing to give it some time to understand the basics. If you don't like the flat UI, you might want to give Helvetical a try to try and spruce up the look a bit. As of now though, I wait for the day when Google will finally give some love to this semi-forgotten app of theirs and give it a much needed experience overhaul.

What do you think of Google Calendar? Leave your constructive criticism in the comments.

And if you’ve built a web app that you’d like the Activetuts+ community to do a critique on, submit it here. We’re looking forward to seeing what you’ve made.

Ashish Bogawat
I'm a graphic designer, technology enthusiast and gamer. Other than drooling over gadgety goodness on the web and elsewhere, I work as a design consultant and entrepreneur with a focus on web, communication design and learning design.
Weekly email summary