WordPress Coding on Your iPad

With the imminent announcement of the iPad 3, there's little doubt that we've entered the Post-PC age. These devices are often touted as being more about the consumption of media than its creation, but as they become more and more powerful, even this line is becoming blurred. Let's review the viability of coding for WordPress on an iPad.

Note: I'm using an iPad and iOS apps for this example, but of course, these principles apply to Android and other tablets too. I'm just writing from my own experience and regarding the apps I've used.

Since purchasing my iPad, one of the things I've enjoyed has been that I couldn't really use it for work. It was a kind of enforced relaxation, but while still feeling connected. As time has gone on though, I've begun to use it more and more for work, and recently decided to try and develop a WordPress plugin using only my iPad. I'm still developing the plugin, but here's what I've found so far.

Is the Hardware Ready?

The iPad is plenty powerful enough for running development apps. Development apps are generally not especially demanding on a machine's hardware, and let's face it, the iPad is more powerful than computers we might have used for development 10 years ago anyway.

One thing I have found is that for development, or even just article writing, the iPad's on-screen keyboard is really not adequate for regular long-term usage. I've bought a wireless keyboard and stand to use (specifically, a ZaggFolio if you're interested), and this has really changed things. Now, writing articles and code on my iPad is very doable. 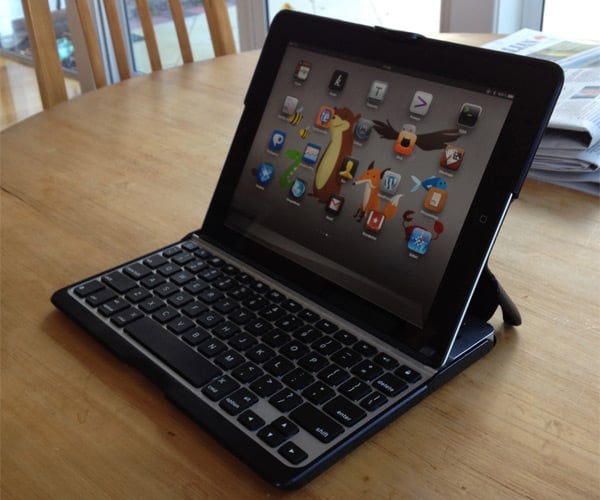 Is the Operating System Ready?

Generally speaking, as long as you have the software you need, operating systems really don't get in the way of development. So whether you're using iOS, or Android, or anything else, it's more about the apps. One thing I have found about iOS that could use some improvement when it comes to development though, is app-switching. Why?

Are the Apps Ready?

This is really the most important consideration. If the apps aren't ready, then it will be impossible to develop on the iPad. So what apps do we actually need when it comes to developing themes or plugins for WordPress?

Apps for Planning Your Project

This is one particular area that's gotten a lot of attention from app developers, and it shows. There is an extensive collection of apps available for planning and managing your projects. From expanding on the kernel of an idea, to interacting with version control systems, to collaborating on wireframes. Here are some examples of apps I've decided on for these parts of my project:

Apps for Developing Your Project

More and more code editors are becoming available, and while they vary in their exact approach, they all have the basic functionality you need to get going. There are also apps for interacting with your web server and file systems.

More Apps for Your Project

So you've been able to plan your project, and develop it, here are some apps to use once your project is up and running:

Ok, so I augmented my iPad for coding with a bluetooth keyboard, and I got all the apps I needed for planning, developing, and managing the project. Now how did they actually work together? Here's what I've done so far:

While I'm still fairly close to the beginning of my plugin development project, I think things are looking extremely promising for development on the iPad. I haven't been forced to abandon the iPad yet and continue developing on my main development machine, and other than app-switching, it's actually been quite a fun experience.

What do you think about the potential for developing your WordPress themes and plugins while on the go with your Post-PC device?

LecturesWordPressiOS
Did you find this post useful?
Yes No
Would you like to provide feedback (optional)?
Cancel Submit

Japh Thomson
Japh is the WordPress Evangelist and Wptuts+ Editor at Envato. He has been doing website development and training for over 15 years, and specialises in WordPress, PHP, MySQL, and JavaScript. He also enjoys working with APIs. Follow @Japh on Twitter
Weekly email summary