The latest and greatest version of the WordPress software — 3.3, named “Sonny” in honor of the great jazz saxophonist Sonny Stitt — is immediately available for download or update inside your WordPress dashboard. We'll be covering lots of the new features of 3.3 this week, but for now, go and great the latest version! As we've mentioned before, it's the best way to keep your WordPress site safe and stable.

The final release of WordPress 3.3 brings lots of goodies just in time for the holiday season. Not too long ago we had a sneak peek at the Beta 2 release, so some of what's in the final release will be familiar, and some we haven't covered yet. Let's take a look at what new features there are to discover and what things have been fixed up.

Here are some of the big highlights you'll find in WordPress 3.3: 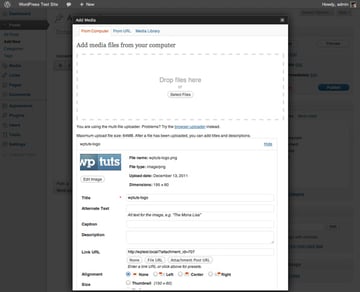 The new uploader also combines the various upload buttons that were there before into a single upload button, and has built-in file type detection. Support for uploading .rar and .7z files has been added too.

Improvements to the dashboard

There are some really nice improvements to WordPress' dashboard in version 3.3. Where we used to have a strange mix of the admin bar and the admin header, they've been combined into a single admin toolbar. Of course, now that there's just the single toolbar, the option to turn the admin bar off has been removed.

More and more people are wanting to manage their WordPress-based sites from their iPad or other tablet or touch devices, and there's now better support for these. This includes better handling of touch, as well as a few responsive enhancements to ensure everything scales nicely on the smaller screens these devices have. 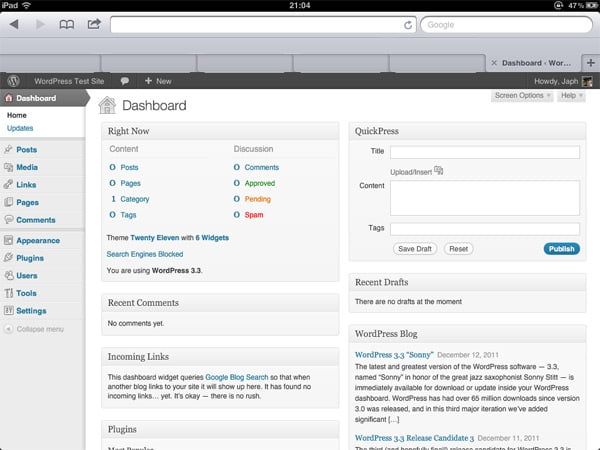 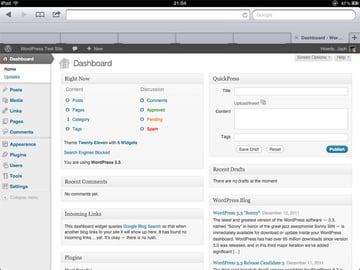 Ever been annoyed at having to click multiple times to get from one screen to another in the admin? Well you shouldn't have to worry about that much anymore, as the menus in admin now fly out when you hover over them, allowing you to get to most screens in a single click! 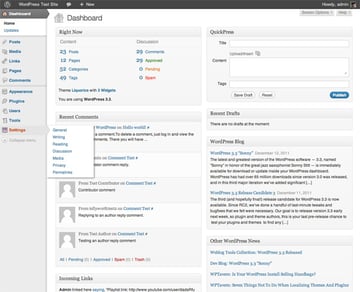 As if we hadn't had enough user experience improvements on the dashboard already, there's more! These improvements are mainly based around making the whole installation and update procedures much friendlier.

There are now feature pointers which provide tips around the various WordPress admin screens when there are new features added. These help highlight what's changed in the new version and give an idea of what the new feature does. 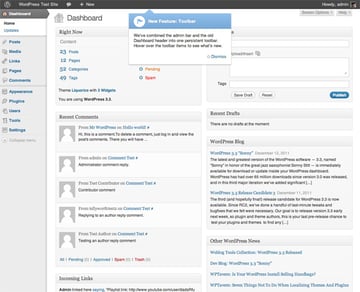 We also have a screen that will be shown to users after an update is run with a brief summary of what's new and improved in the updated version of WordPress, and a welcome screen for brand new users just logging into their freshly installed WordPress (those lucky people don't even know what delights await them!). 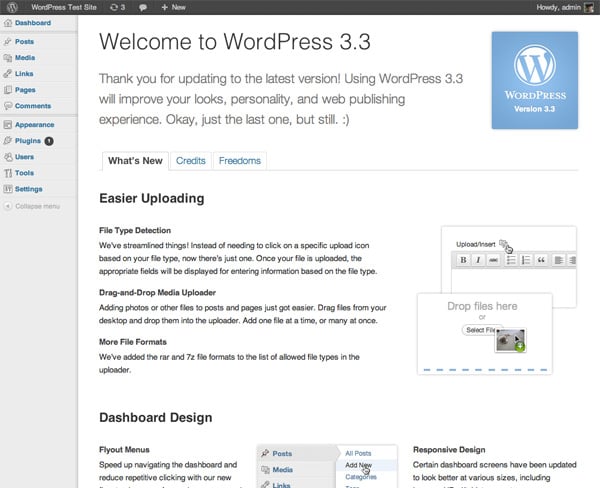 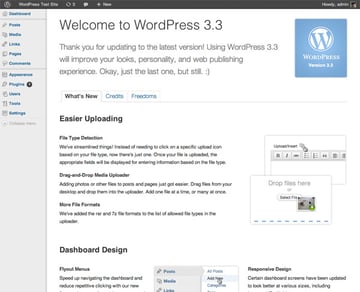 If you run a WordPress site with multiple authors, co-editing could sometimes be painful with WordPress locking a post to a particular author and leaving it locked for too long. No more! In 3.3 this has been improved and content locks are now released immediately for a smoother co-editing experience.

For people who have content on Tumblr that they'd like to move across to WordPress, there's now an importer for that. The process of migrating your hosted Tumblr blog to a self-hosted WordPress install just got a lot less painful.

Speaking of less painful, if you've been trying a few different themes on your site and then gone to look at your collecting of widgets to find a mess, this new version should improve that for you too. Widgets are saved when switching between themes, and if you want to quickly try a new theme and decide to switch straight back, all your widgets will be as you originally had them. Magical!

Under the hood improvements 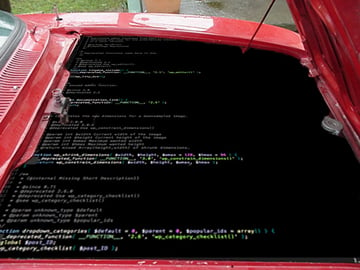 For as long as WordPress has been around, if you had a large number of pages / posts and were using /%postname%/ as your permalink structure, you were suffering a pretty big performance hit. When users accessed your pages, and when you published or edited your pages, there was a bit of waiting to do. The problem only got worse the more content you had. Luckily, the WordPress team have sorted this issue out, and there are now "massive performance gains" to be had with this update if you're using that structure.

A number of new and improved APIs have had some TLC too, including the Editor API, the Screen API for adding help tabs and adapting to different screen contexts, and the Metadata API.

A few of the external libraries and extras used in WordPress have been updated to more recent versions, including jQuery upgraded from 1.6.1 to 1.7.1, jQuery UI upgraded from partial 1.8.12 to the complete 1.8.16 (including widgets and effects), and TinyMCE upgraded to 3.4.5.

WordPress will now clean up after itself when theme and plugin files are uploaded to be installed. The files uploaded will be deleted from WordPress' file structure once the install is complete.

Another thing that theme developers will appreciate is that you are now able to use wp_enqueue_script() and wp_enqueue_style() within the HTML body. This means that if you have some specific functionality in a page template in your theme, you can include any scripts or styles right there, and they'll be added in the theme's footer.

Well we could rave all day about the awesome work the WordPress core development team and the rest of the contributors have put into our favourite content management system! For now though, we'll point you to the details on the WordPress 3.3 "Sonny" release post (make sure you watch the intro video too!) and the WordPress Development Updates blog. Those two links will give you all the nitty gritty details about what's changed, how you should use the new bits, and (if you're a developer) how you should fix the bits that might be messing with your theme or plugin.

So, now you're up to speed, go download WordPress 3.3 from the website or via update from your WordPress admin. Once you've had a play around, come back and tell us what you think.

Japh Thomson
Japh is the WordPress Evangelist and Wptuts+ Editor at Envato. He has been doing website development and training for over 15 years, and specialises in WordPress, PHP, MySQL, and JavaScript. He also enjoys working with APIs. Follow @Japh on Twitter
Looking for something to help kick start your next project?
Envato Market has a range of items for sale to help get you started.