WordPress 3.2: What You Need to Know

WordPress 3.2 (aka "Gershwin") came out on the 4th of July, and it features some radical new changes that you're going to want to know about. A new dashboard design, new default theme, and other enhanced admin features that make using it even easier to use - let's dive into the changes.

I am an avid WordPress user; I use it for all of my personal sites, all of my client sites, and I've been known to develop a plugin or two. I've seen many transformations since I started using it (waaayyy back at 1.5) and I'm glad to say it underwent yet another one this last week. Let's break this down into the main new features you should know about:

Editor's Note: It's important that we make one major point clear at the top, since there seems to be a bit of confusion from the original phrasing in this post: WordPress isn't a product by Automattic, it's "an open source project led by a core development team, and contributed to by hundreds." (well put Andrew!) The changes made in 3.2 are the result of the contributions of that collective effort, not that of a single company. While Automattic has significant influence over the changes made in each version, there are hundreds who have contributed (read the full list here). It's the collective spirit that makes WordPress what it is, and we're sorry for placing any undo emphasis on Automattic in the phrasing below!

As a WordPress user, I'm happy with the design adjustments made to the Dashboard and throughout the admin panel. Most noticeable is the left navigation, which is much cleaner and grouped a lot better. It's also much easier to tell what section of the admin you're in with the highlighted headers.

Aside from the navigation, there are a lot of subtle changes that make a big difference. The containing boxes on the dashboard and throughout admin have changed, the typography has tightened up, and they reworded some of the menus (ex. changing "Tools" to "Available Tools"). What I think is a really nice touch is the addition of the "Freedoms" and "Credits" pages in the footer, which helps you get to understand WordPress a little better.

IE6 support has been a fading notion for lots of big web enterprises lately, so that part doesn't come as a huge surprise. The most notable technology change is that you'll need PHP5 and MySQL5 to run WordPress 3.2. This means that people running older versions of either technology will need to update to the current version to get things up and running. 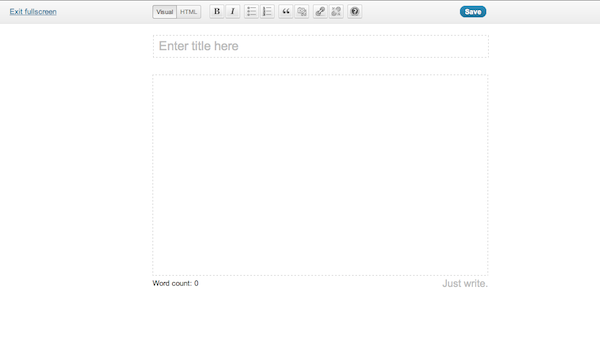 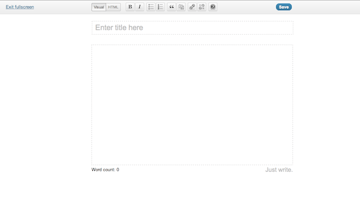 If you head on over to edit a post, page, or custom type, you'll notice the editor got a bit of a facelift as well! The icons were redesigned (and look great in my opinion), the HTML editor now uses a monospace font, best of all, there is full screen mode.

In full screen mode (screenshot above), everything except for a simplified editor bar and some borders that denote your editing area goes away so you can really focus on your writing. If your cursor doesn't move for a second or two, everything except for the title and text of the post go away until you move your cursor again. This is pretty slick and serves as a nice distraction-free way to write.

At first, I wasn't a big fan of the admin bar; I thought it got in the way of the design. Then I started using it and realized it made editing pages and posts much easier, and that was with the limited functionality the admin bar had.

In 3.2, the admin bar got a separate Dashboard button, 'Add New' has been extended beyond post, page, and custom types, the Appearance button has been extended, and there is now an Updates button. Under 'Add New,' you can now see Media, Link, User, Theme, and Plugin. You can also manage all of the options under Appearance, as opposed to just Widgets and Menus. This makes it incredible easy to manage your WordPress site from both the front- and back-end.

To be honest, I wasn't a huge fan of Twenty Ten. I thought it did a good job of demonstrating the new features of 3.0, but I wasn't a fan of the design, and for a default theme it was incredibly complicated to read code-wise; I feel you should be able to learn how to code a WordPress theme by looking at the default theme. Twenty Eleven brings that back.

Based on the Duster theme, Twenty Eleven is a much cleaner design (I LOVE the font they use for the body text), with several widget areas, and the code is much easier to read. It's also plugable (like Twenty Ten)- making child themes based on it is a fairly easy process. As an added bonus, Twenty Eleven is a fully HTML5/CSS3 theme.

As a programmer, I'm very much an "under-the-hood" guy; I worry about load times and code optimization. That's why I was very excited to read that 3.2 is faster and lighter than previous versions. They've gone through and reduced the load times of the most popular pages in the admin, they've added support for incremental upgrades which means updating the WordPress Core and plugins is now much faster, and they've optimized their code for certain queries and security functions. Along with that, they've included caches that will reduce the number of calls WordPress needs to make in certain areas, therefore reduced the amount of memory needed.

In my limited use so far, I can tell that WordPress is running a bit more smoothly. Nice work by Automattic and everyone else involved in the project!

While the list is rather long, I did want to mention that WordPress 3.2 sees a bunch of new filters, functions, and changes for theme and plugin developers. Some of the notable addition from the above list include:

I'm really excited about 3.2. The new dashboard design is fantastic, full screen mode makes concentrating on your writing easier than ever, and the new default theme is one the WordPress community should really be proud of. Plus, WordPress is lighter and faster, which should be a big relief to power-users like me (and probably most of you). If you're interested in what else is new, you can view all of the changes here.

Joe Casabona
Joe Casabona is a web developer, author, and teacher who focuses primarily on WordPress and mobile development. His latest book, Responsive Design with WordPress is out now. He is also a Yankee fan, plays the drums, and enjoys a fine cigar from time to time.
jcasabona
Weekly email summary