What You Must Know About the New Safari 4 Beta

Apple released Safari 4 Beta last Tuesday, for both Mac and Windows users. The updated browser received a UI update, many major improvements under the hood, and plenty of new features to play with. The new browser passes the ACID2 and ACID3 tests with a score of 100, and contains a few next-generation technologies that web developers will love, once we can take advantage of them. Let's take a look at what's new. 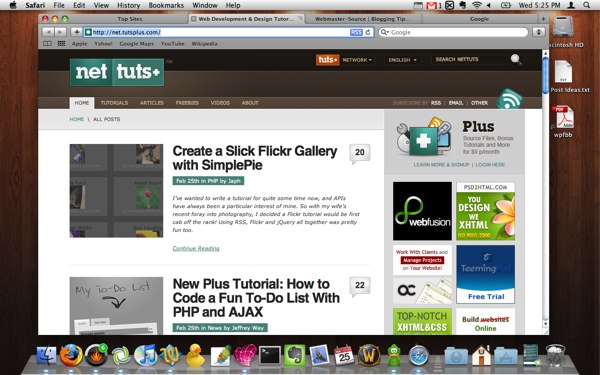 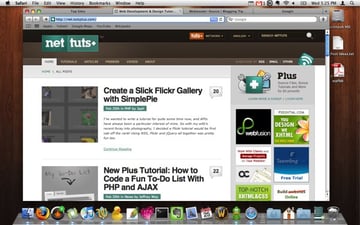 Perhaps the most noticeable new feature is "Top Sites," a screen that comes up when you first launch the browser. The 3D view shows your most-used web sites, keeping them within easy reach when you start your day of browsing, as well as when you open a new tab. A blue star in the corner of a thumbnail denotes that the site has been updated.

Safari automatically decides what sites to put in the grid, but you have some control. You can remove sites from the screen, rearrange them, and pin them to the page so they won't be removed if your browsing habits would cause them to do so. You can make the thumbnails bigger or smaller, changing the number of displayed sites when you do so.

This feature, reminiscent of Google Chrome and Opera, can be configured to be displayed to your liking. If you prefer to have a specific homepage instead of the Top Sites page, you can set one. It is also possible to stop it from displaying whenever you open a new, blank tab. 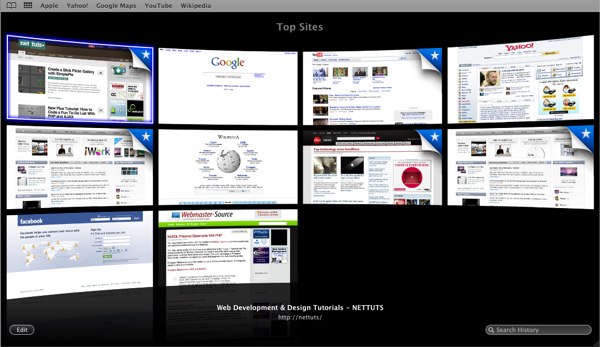 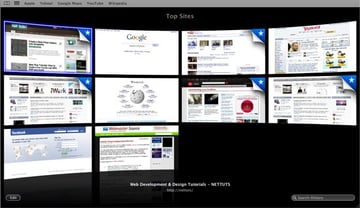 Like Chrome, Safari 4's tabs are located at the top of the window, and have a similar window-docking feature. You can pop a tab out and convert it to a standalone window, or do the inverse, docking an existing window into the tab bar. It takes a little while to acclimate to the new tab UI, but it seems to work well once you get the hang of it.

One little inconvenience is the difficulty of re-ordering tabs. You have to drag them from the little handles in their upper-right corners, rather than just grabbing the main part of the tab. If you try to move the tabs around "the old way," you will drag the entire window, as the tab bodies act as the window top. Personally, I tend to sort my tabs often, so this would definitely hinder my productivity, for awhile at least.

Apple sure loves their Coverflow... Safari 4 applies the spiffy effect all over the place. Your browsing history is displayed in a two-paned Coverflow view, and the Bookmarks screen is too.

This navigation method works surprisingly well, especially with the full-text search tool that allows you to narrow things down. It's easy to pick out what you're looking for, and it certainly looks pretty. 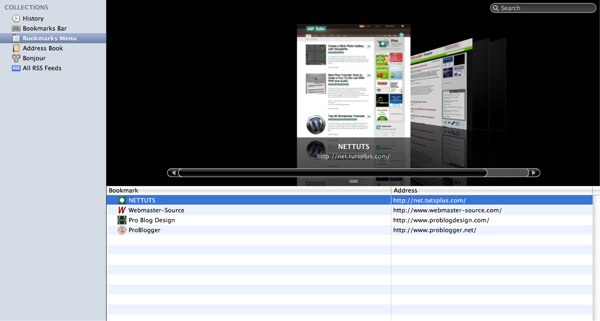 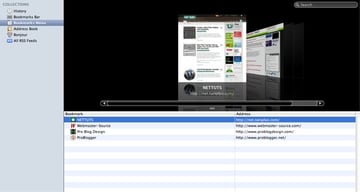 There are several search-related improvements in the latest Safari beta. The aforementioned full-text search of history and bookmarks can find you the page you seek quickly and with very good precision. It searches the actual page content, from an internal cache one would assume, in addition to the standard title and URL information.

The Google search box to the right of the URL bar has been refined. It displays search term suggestions as you type, including recent queries. An option to use Yahoo results is also included, for Windows users. The useful SnapBack feature remains, providing an easy way to jump back to your results after perusing one of the recommended pages. 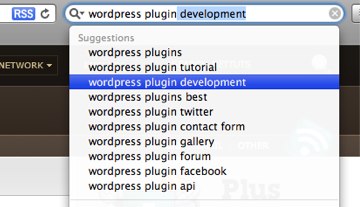 The updated rendering engine is snappy, and JavaScript execution is good too. They seem to be comparable to Google Chrome, possibly faster, though it's impossible to tell without more formal speed tests.

Web apps like GMail and Bloglines worked well, and didn't seem to lag for any reason other than network or server problems. I didn't notice any glaring CSS or JavaScript bugs during the time I used the browser.

Apple claims that Safari 4 Beta tops Chrome and Firefox 3 for speed in both HTML rendering and JavaScript execution, leaving Microsoft's Internet Explorer in the dust. Bold claims, though we will have to wait to see 3rd-party testing results, which will surely be available soon.

Page loading times are improved with speculative loading. Safari loads files ahead of time so they won't have to be downloaded later, when you want the page.

Safari 4 packs plenty of useful features for web developers. A new Develop menu, which can be activated in the Preferences, houses many of them.

One of the new developer tools is a handy submenu for changing the User Agent string. Safari can masquerade as any browser you may require. You can set one of the numerous versions of Internet Explorer, Firefox, Safari, Opera, Mobile Safari, or a custom value. 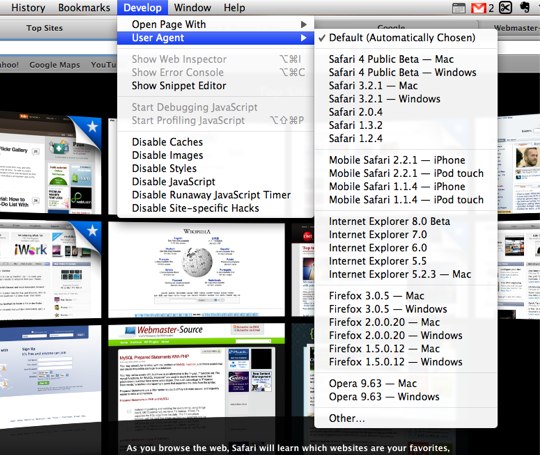 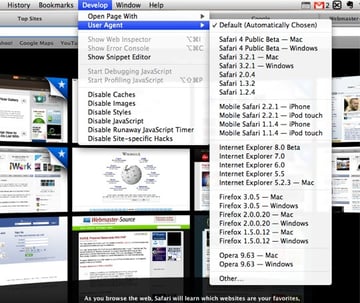 One of the more prominent entries in the Develop menu is the Web Inspector. The little window is similar to Firefox's popular Firebug extension. You can read and modify CSS information, analyze size and loading times, and debug scripts. If you do much in the way of front-end development, this is the killer feature right here. 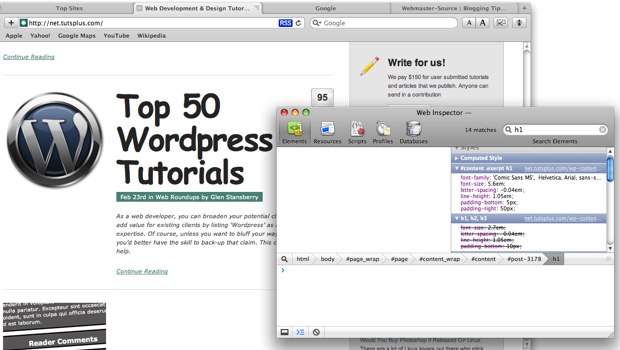 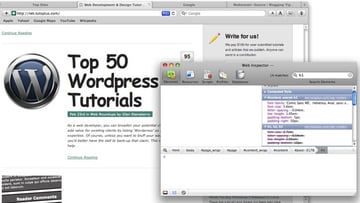 A "Snippet" window can be called-up to quickly test bits of HTML out. As you enter markup a preview is displayed underneath. 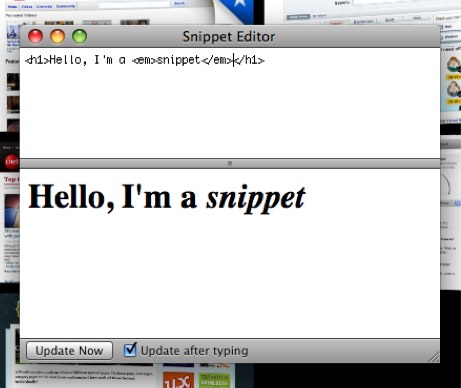 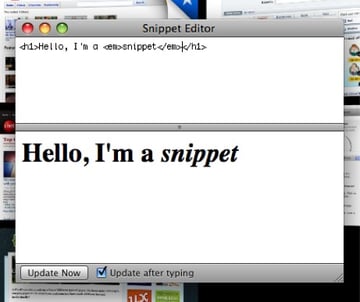 The Develop menu also has several options for disabling browser functions temporarily, including the cache, JavaScript, CSS, images. With the advent of the menu, Safari has become a powerful development tool.

Safari is ready for the future of the internet, including support for technologies that are on the bleeding edge, and aren't entirely standardized yet. HTML 5 offline support is one of those. Data can be cached in a local SQL database for access when an internet connection isn't available, a la Google Gears.

CSS 3 "web fonts" are supported as well. Safari has the ability to recognize a properly specified font and download it if it is not already installed, enabling web designers more control typographically.

HTML 5 media elements are also supported. The browser can handle certain audio and video formats natively, without the help from an external media player plugin, just like images are done.

Safari 4 is shaping up to be an excellent browser, a real competitor in the New Browser Wars. Keep in mind that it is still a beta for now, and may have some rough edges. That's no reason for you not to try it though. It seems stable (on the Mac side at least) and it has a lot going for it.

Matt Harzewski
Matt is a blogger, web developer, and writer of fantasy short stories. When he's not working on his many web projects, he can usually be found bowling or reading.
mattharzewski
Weekly email summary