There's a pile of industry developments to report back on this week; most notably the blossoming relationship between Unity and Flash, Adobe AIR 2.6 hitting the desktop, Flash Player and Android, plus Mark Doherty's commentary on the Flash advancement roadmap. Plenty to dig into…

Unity to Publish to Flash With "Molehill"

Seeing how this is Unity Week at Activetuts+, it is only appropriate to include this extremely exciting piece of news. Unity has stated, through an official blog post, that a future version of the software will enable export to Flash Player. This, of course, has everything to do with the upcoming "Molehill" APIs baked into Flash Player 11 and now accessible to developers via the Flash Player "Incubator" build on Labs. This announcement opens up a whole lot of existing 3D tooling for Flash developers, and a wider distribution market for current Unity developers as well. 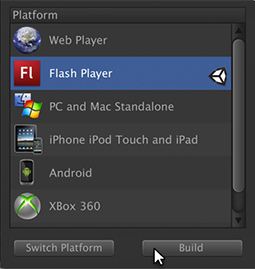 For those unfamiliar with Unity, it is a powerful interactive 3D software platform primarily used for creating games across screens and devices. Unity tools currently publish to the Web through the Unity Web Player, Windows and Mac standalone, iOS, Android, and Xbox 360. With the addition of Flash Player, this opens up another huge portion of the Web to Unity developers. Everybody benefits!

Adobe has definitely taken the right approach with these APIs: building all the power and raw flexibility into Flash Player, and leaving it to the community to build awesome frameworks and tools around it all. Unity is just one of the many entities embracing this strategy along with well-established AS3 3D frameworks like Away3D, Alternitiva3D, and many others.

While the mobile version of AIR 2.6 has been available for some time... the runtime is now available for desktop operating systems and iOS as well! This new version brings a ton of new features, primarily including support for iOS devices but also: owned windows, native cursor support, bitmap capture for StageWebView, and Asynchronous Bitmap Decoding among many other additions and improvements.

The Packager for iPhone functionality has been brought over to ADT in the form of "AIR for iOS" bringing it up to speed with the Android version of the runtime! Remember; the AIR for iOS runtime still needs to be bundled along with any application for that platform, as Apple does not allow separate runtimes on iOS.

Also of note: AIR 2.6 mobile has an update that is now live on the Android Market!

Late in the day on March 18th, Adobe announced a general availability release of Flash Player 10.2 for both Android 2.2 (FroYo) and Android 2.3 (Gingerbread) along with a beta release for users running Android 3.0 (Honeycomb) on tablets such as the Motorola XOOM.

Mark Doherty, Flash Platform Evangelist with Adobe, has written an informative post on his blog regarding the recent acceleration of Flash Player releases and some points regarding the roadmap for future versions of the runtime. For anyone working with the platform on a regular basis, there is a wealth of information around mobile, Flash Player 10.x, and the future Flash Player 11. There is even a bit of personal opinion thrown in regarding the current environment of tech-zealotry that exists.

Flash is the innovation engine for the web and digital experiences