Top 10 Reasons Why the Closing of Geocities is Long Overdue

Geocities is finally, after nearly fifteen years, bowing its head and closing its doors. While the first reactions of many, like myself, was, "it's about time;" others embraced the nostalgia of their first websites in the nineties - full of animated gifs, enormous counters, midi tunes, frames, tables, ... the list goes on and on. With that said, we can all agree on one thing if we're truly honest with ourselves: this closure is long overdue!

One of the first things that everyone thinks about when they hear "Geocities" is the long and memorable (albeit annoying) site paths, known as homesteading. When Geocities first started, there were a mere 6 neighborhoods, which included "Colosseum," "Hollywood," "RodeoDrive," "SunsetStrip," "WallStreet," and "WestHollywood". They were great, allowing newcomers of personal homepages to fantasize about the new cyber world they were about to enter. Within a year, 23 more neighborhoods popped up along with the terrible headache of explaining what neighborhood, suburb, and 4-digit number your webpage was located at. Luckily by 1999, Yahoo had taken over and switched the homestead URL scheme to the more modernly used vanity URLs. But even though the lengthy URLs have been long gone for 10 years, their association with Geocities remains remnant enough to be the first reason why the closing of Geocities is long overdue. 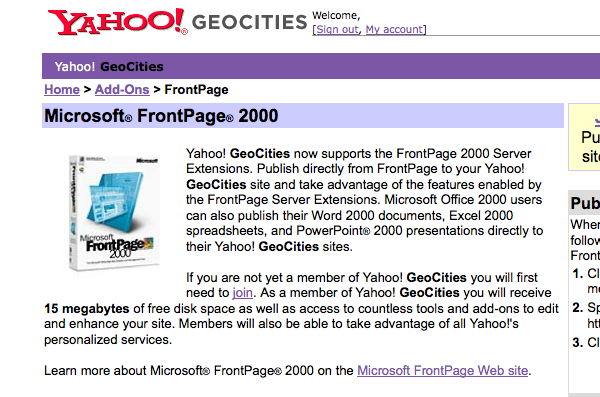 Back in the 90's, 15 megabytes was more than enough to store your 5 page website; not to mention the ten 640*480 JPEG pictures from your digital camera. It was even enough to host MP3s for your friends to check out before deciding to download this thing called Napster for themselves. It was a much simpler time back then, when data exchange would still often occur on 3.5" floppy disks. But in this day and age of broadband and Hi-Def streaming, running a website off of 15 megabytes of webspace is barely enough to host a decent Wordpress blog for a month. I mean, let's face it, even emails have had larger space limits for years now. 15 megabytes just doesn't cut it anymore.

I haven't actually experienced much Geocities spam sites personally, as Gmail filters my spam mail pretty robustly. But many users have complained about a large number of Geocities webpages hosted purely to bypass spam mail filters which block out dangerous links. These Geocities pages would redirect users to a target URL, by using cleverly encrypted javascript. (source: Spamtrackers.eu) 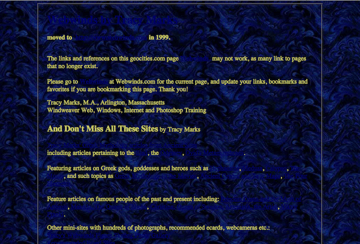 While nobody really got the hang of webpage design in the 90's, Geocities site owners seemed to master the art of amateur design. One of the requirements for starting a page that I must have missed was having no sense of color coordination. For some reason the use of multicolored neon text on busy tiled background images were a popular choice. This usually turned out to be better, letting you know that the content wasn't worth reading anyway.

I'll admit that I was part of the cause for this reason, but Geocities became infamous for abandoned webpages in the early 00's. People such as myself, would create accounts and build webpages just to host pictures and MP3s for friends to download (as mentioned in Reason 2: 15 Megabytes). This type of abuse led to thousands of empty webpages and parked sites that lead to much wasted google indexing and disappointing clickthroughs. 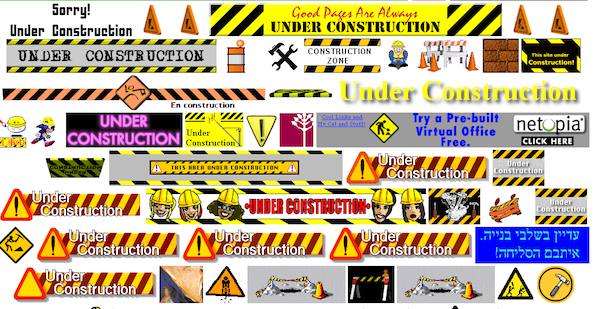 This one sort of relates to Reason 5: Abandoned Webpages. Chances were, if you didn't stumble upon an abandoned webpage, you probably came across a webpage forever under construction. Many users new to website building only made it far enough to make a new site with the obligatory "This is my site." text. Soon after, that website would be long forgotten while the owner moved on to LiveJournal or Xanga.

Sometime toward the end of the century, people discovered the ease of Flash, allowing simple animations of images and text. Then *BOOM*, you suddently could no longer visit a webpage without having to sit through 15 seconds of bouncing images and scrolling text. Fortunately, this trend only stuck around for a few years.

Webpages of the 90's really only had two main layouts: navigation on the top, and navigation on the left. But the one thing that both layouts would share was a big rectangular homepage banner placed at the top.

Though this is probably more of a Xanga "thing" these days, Geocities was one of the first to start the use of using MIDIs as background music for homepages. Before the popularity and accessibility of MP3s, MIDIs were the popular file format for music due to their small file sizes. However the tones of synthesized horns and keyboards got old and annoying very quickly. There's nothing that opitomizes Web 1.0 for me than a happy birthday midi playing. 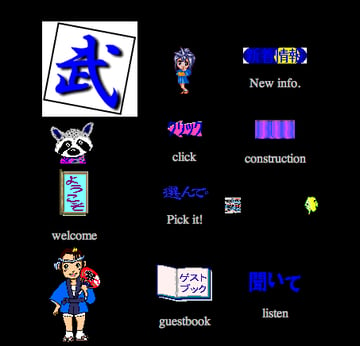 If there was only one reason the closing of Geocities is long overdue, it'd definitely have to be the animated GIFs most associated with the Geocities name. Love them or hate them, you can't help but remember the once trendy craze of pixelated animations. They'd slow down your browsing to a crawl, and really test your patience. From the rotating 3D text to the dancing clipart images, Geocities was flooded beyond belief with these lagging monstrocities.

Without further ado, we bid you farewell, Geocities. As we push your cardboard box into the sea, let's take a look at some especially awful Geocities sites. (Be sure to leave a comment with yours, and I'll update the posting!) - Jeffrey 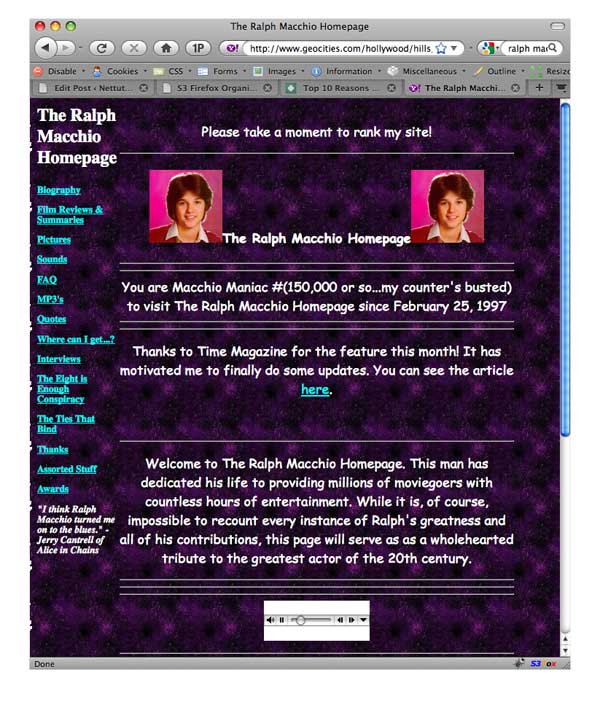 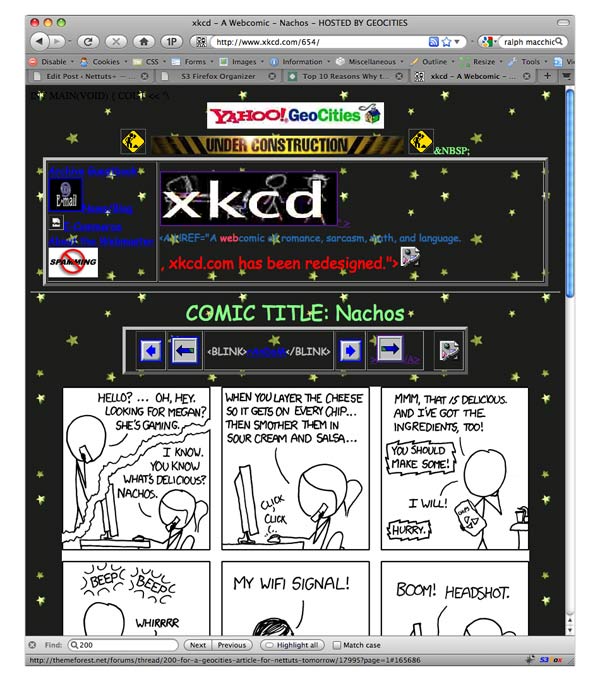 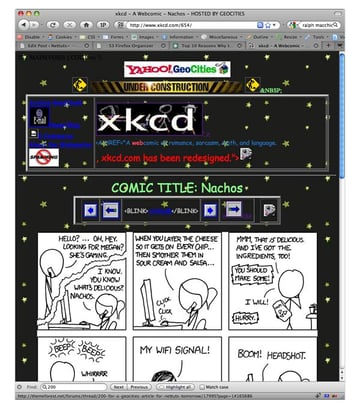 GeneralWeb Development
Did you find this post useful?
Yes No
Would you like to provide feedback (optional)?
Cancel Submit
Want a weekly email summary?
Subscribe below and we’ll send you a weekly email summary of all new Code tutorials. Never miss out on learning about the next big thing.
Sign up

Joseph Rosario
N/A
Looking for something to help kick start your next project?
Envato Market has a range of items for sale to help get you started.