When I started designing and developing themes and templates for the ThemeForest marketplace five years ago, customer support was easy. I’d get an email or two a day, answer them, and move on.

Email was no longer a tenable support solution.

Two years ago, I decided that enough was enough. Email was no longer a tenable support solution. I needed to find a better way.

So I did some digging around for a support solution. And believe me, there are plenty out there. Some are free -- mostly poorly designed, buggy DIY scripts to install and run on your own server. Some aren’t -- prettier, feature-rich … and expensive. Fifty bucks a month? For a guy like me, forget it.

Simply put, there was nothing out there that appealed to someone doing well -- but not getting rich -- selling online. So I decided to build one. Something simple. Something with the features I needed, and nothing else. And something that played nice with the Envato API.

Two years later, I finished Ticksy -- and I love it. It’s sleek, easy to use and getting some great reviews.

Most importantly, it’s doing a great job handling my support requests -- the reason I built it in the first place!

As any developer knows, simple on the outside invariably means complicated on the inside. And, while Ticksy was a labor of love, building it was anything but easy.

I spent roughly three months designing the UI - buttons and form fields on the login screen, tabs and dropdowns in the app and more. Product management had to be spot-on, too. The initial Envato integration made it possible for me to tie every ticket directly into one of my products in the marketplace. Eventually, I worked product verification into the mix -- only actual owners (not pirates) of my themes could submit tickets.

They liked it. No more email!

I developed the first, basic version of Ticksy using PHP and MySQL in about five months -- continuing to support customers via email in the meantime (yuck). Finally, by the end of 2010, I was able to deploy the system for my own business. Customers started using it. They liked it. No more email! I felt great; a huge load was off my shoulders. 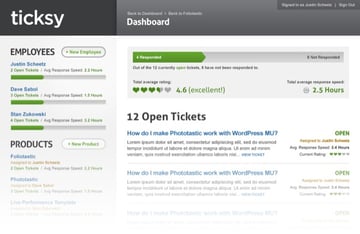 The original Ticksy dashboard, circa 2010

Then, something unexpected -- and pleasant -- happened. People started asking me about the system. The customers actually enjoyed using it as much as I did and wanted to know how they could use it in their businesses. I had no answer at the time. This was my system. I built it for me. Were there other people like me that would use something so simple?

Turns out there were. People wanted Ticksy. So I was back to the drawing board.

Two partners and I redesigned the UI and backend to allow for multiple systems, added social sign-in buttons (Facebook and Twitter), got feedback from friends and family and added a few other features. I essentially redesigned/developed the entire Ticksy system, and launched a beta build in early 2011.

I had around ten beta users using it full-time, and they loved it. Months went by, bugs were squashed, the UI was refined and I let it get some good use for a long time. If I was going to release this to the public and expect people to pay for it, it had to work well. I let it go for a year before deciding to release it to the public. My product was polished. Ticksy was ready for the limelight.

After many months of testing, developing a marketing site (powered by WordPress), creating a marketing video (with the help of VideoHive’s own Bryan Drake) and planning everything to the last detail, we launched Ticksy to the public in March.

If you’re a designer, you know the feeling of taking a product live. It’s amazing. But it’s also a bit scary. What if people don’t like it? What if it doesn’t sell?

Thankfully, with Ticksy, my fears were quickly assuaged. The initial group of users loved it, talking up its simplicity, its reliability and even its price point. Like me, they were freed from the headaches of email-based support -- without having to turn to a cheaply built free solution or an expensive, bloated “do-it-all” app.

As a designer, it was supremely validating. And it was a reminder to keep working.

A developer’s work is never done. And despite the project’s success, that’s certainly been true for Ticksy.

As initially released, Ticksy was an intuitive, bloat-free, web-based customer support solution that could be customized to match any existing brand. After months of work, it’s still that -- and more. Now, end users can label their tickets “public” or “private,” bringing an element of the traditional community forum to support. Search functionality for customers is enabled. And enhanced FAQs, notification systems and better Envato integration are on the way soon. (You can check out our roadmap here.)

Ticksy has been a two-year journey of discovery and hard work.

For me, Ticksy has been a two-year journey of discovery and hard work. But it’s been worth it.

What started as a project to simplify my own work has taken on a life of its own. I never expected Ticksy to see the light of day outside my office. But it’s incredibly vindicating to check the growing list of users and read their feedback. Really, it’s every developer’s dream. Ticksy has truly arrived. And, with each user, it’s making web-based customer support just a little bit simpler.

The process of taking an idea from sketch to launch is a significant achievement. If you have any, more specific, questions about the process (such as the tools we used for reporting bugs, version control, etc.), let me know in the comments, and we'll talk!