Twitter and Google+ are great places to keep up to date with what's happening with Flash and Unity, and to find excellent tips shared by other people. I've rounded up the most interesting posts I've seen from the past two weeks; if you're not on social networks, come and take a look at what you're missing!

AS3 LiveDocs: Updated and Now Searchable From Chrome

The AS3 LiveDocs have been updated with a new version, containing preview content for Flash Player 11 and AIR 3.0. If you're working with the beta versions (or just curious as to what's new), take a look.

In other LiveDocs news, Michael Safyan has released a Chrome extension that lets you search the AS3 LiveDocs via the omnibox (address bar). Just type 'AS3' in the bar, hit Tab, then type whatever you want to search and press Enter.

Sam Rivello has written a wide-ranging guide on getting started with Flash platform game development. It offers a brief look at a huge number of topics: coming up with an idea, getting to grips with AS3, testing your creations, optimizing your code, monetizing what you've made, tracking stats, security...

Each piece of advice has links to other articles where you can learn more about the topic. Definitely worth a read, especially if you're new to Flash or to game development in general!

Speed Up Your AS3 Lookups With an Unnecessary Cast

It turns out that if you replace this:

...then you'll speed up your lookups by a remarkable amount: 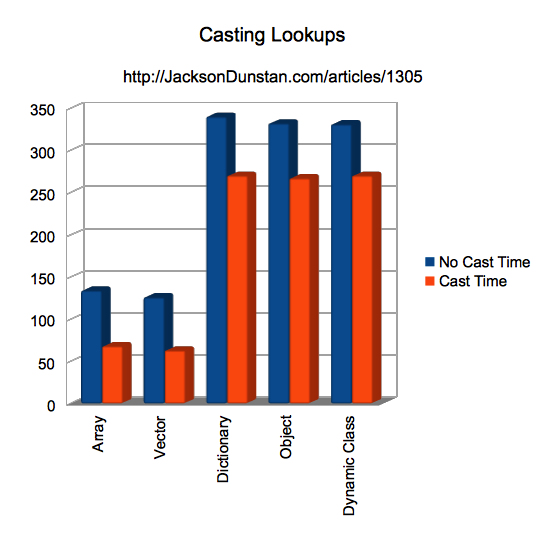 SlashGear reports that Google+'s help pages mention a "Games stream" -- or, rather, mentioned, since the reference has since been removed. Anyone surprised? I don't think it's going out on a limb to assume that Flash and Unity games will be able to interface with this.

Adobe AIR Marketplace Will Shut Down on August 31st

The Adobe AIR Marketplace was launched as a place where AIR developers could sell or distribute their creations -- like the App Store or Android Market, but exclusively for AIR apps. But, as Adobe explain in the recently-rewritten FAQ, the Marketplace will be shut down on August 31st.

A snappy list of tips for new programmers of any platform. I wouldn't say I agree 100% with all of them, but it's great advice as a whole. The comments are worth a read, too.

...though there are plenty more advantages to having developer friends than gaining work referrals!

What's the Deal With Signals?

Did you see Karl Macklin's screencast introduction to Signals that we published recently? Augment it with this article by Justin J Moses.

Not strictly to do with Flash or Unity, but relevant for game designers: great lessons on building and maintaining flow in action games, mainly influenced by Metroid Fusion:

Lorenzo has written a useful bite-sized tip on finding the angle and side length of a tile that's been turned into an isometric rhombus.

Unity 3.4 is out! The main improvements are:

Check out the full list here. If you're new at Unity, check out Matt Stuttard's Getting Started with Unity Session.

This sounds like fun: a day of presentations (by developers including Iain Lobb, Merlin Gore, and Mike Jones), followed by a day hanging out at the pub with fellow Flash game creators. It's organized by Mochi Media, and it's free, too! More details are available here.

Something for the Weekend: BioGems

We'll finish off with a great casual game: BioGems, which is a cross between a match-3 game and an RPG battler: match three "attack" gems to deal damage to your opponent; match three "health" gems to regain HP; and so on. The gameplay is solid and fun, the cartoon fighters are a strange mixture of adorable and deadly, and the music will be stuck in your head for hours afterwards. All in all, a fantastic casual game.

That's It for Now!