The Ultimate Guide to Implementing Facebook Comments on your Blog

Using Facebook Comments on your blog offers your readers a way to instantaneously comment on posts, as well as to share them without having to do any work. If you think this type of commenting system will suit your audience, read on to find out how you can implement it the right way.

Before you actually generate the Facebook Comments code and implement it on your blog, you need to create an app for your site.

On the next screen, you'll see your newly created app's App ID and App Secret Key. You won't need the secret key, but the App ID will be used later. Take note of it.

Below these keys, go ahead and fill out the Contact Email and App Domain (your blog's domain). Go down and click on Website. Fill in the same domain that you used for the App Domain. Click Save Changes.

Step 2: Insert the Facebook Comments Code into Your Theme

In this tutorial, we'll be implementing Facebook Comments alongside the default WordPress comment system instead of replacing it. If you want, you can head over to the Facebook Comments code generator to get the code you'll need for inserting the comment system; however, I've included it here so you can just copy it. You'll need to customize a few parts of it, however; I'll note which parts those are for each block.

The code block below should be placed in your theme's header.php file. Find the opening <body> tag and paste the block directly below it. On the 6th line, replace "Your App ID Here" with your App ID.

While you're still in your header.php file, go up into the <head> section and paste this block of code somewhere. It will ensure that the Facebook Commenting system on your blog posts knows it's owned by the app you created before. Replace the "Your App ID Here" bit with your App ID (leave the quotes in place).

The next code block should be placed in your theme's comments.php file. Since we're implementing Facebook Comments alongside WordPress comments, you'll just be pasting it where you want the Facebook Comments box to appear, and you won't be deleting any of the original code.

If you generate your Facebook Comments code from the link I gave you earlier, instead of just grabbing it from this tutorial, remember to change the data-href attribute from the original URL to <?php the_permalink() ?>, otherwise Facebook Comments won't work.

You can also edit the data-num-posts, data-width, and data-colorscheme attributes to your liking. The first defines how many comments will be shown on each post before a user needs to click "See More", the second defines the width of the commenting system (set it to something slightly smaller than your content area's width), and the last is the color scheme, which can be set to "light" or "dark".

To do this, first open up your theme's functions.php file. Paste the code shown below at the bottom of the file and save it.

Note: This code was built off of a function written by Viceprez on the WordPress Stack Exchange. I've simply added a couple of lines to his original function that add in the WordPress comment count. Thanks Viceprez!

Now that you have the function added to your theme, you can use it to replace the original comment count functions used throughout your theme. In my theme, the comments are called using this code:

Your theme may use this function to display the comment count, or it may not. Once you've found whatever does display it, replace it with this code:

There will likely be several places within your theme that you'll need to insert this code. Here's a list of the most common ones:

If the comment count in your comments.php is diplayed as a sentence, instead of just a number, you can use the code below instead of the one line function call in order to allow for words like "no comments" and "one comment". I've customized mine to be more inviting - I'd recommend that you do the same instead of being generic :)

The last part of the tutorial will show you how to get Facebook Notifications whenever someone comments on your blog.

First, you'll need to access your comments moderation panel. You can do that by pasting the following URL into your browser, substituting "Your App ID Here" with your App ID. You might also want to add this page to your bookmarks once you're at it.

Once you're at your comments moderation panel, hit the Settings button in the top right corner. A window will come up, and you should see a Moderators field in the middle of it. Simply add yourself as a moderator, and you'll start getting notications whenever someone comments on a blog post. 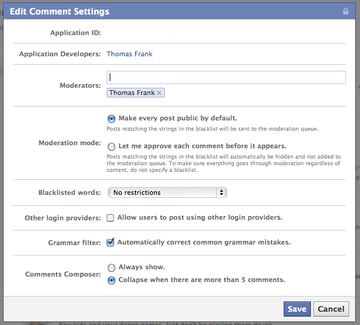 If you've followed all the steps in this tutorial, your blog should now have Facebook Comments implemented right alongside the default WordPress comment system. I believe this is an ideal setup, as it gives your readers the best of both worlds; Facebook Comments is probably the most convenient commenting system out there, if a reader is signed in to Facebook (they most likely are), then there's absolutely no authentication or identification fields to fill out. They can just comment away. However, if a reader doesn't want to use Facebook, or wants to add their link or get CommentLuv benefits, you can still let them use WordPress comments.

You also now have a comment count for each post that shows the sum of the comments from each system, and since you're a moderator for your app, you'll get immediate notifications of new comments. I hope you enjoy your new and improved commenting solution!

Creative CodingWordPressFacebook
Did you find this post useful?
Yes No
Would you like to provide feedback (optional)?
Cancel Submit
Want a weekly email summary?
Subscribe below and we’ll send you a weekly email summary of all new Code tutorials. Never miss out on learning about the next big thing.
Sign up

Thomas Frank
Thomas Frank is a senior at Iowa State University studying business. He's a writer of college tips and a serious headphone afficionado. You can connect with him on Facebook or Twitter.
TomFrankly
Looking for something to help kick start your next project?
Envato Market has a range of items for sale to help get you started.