Ruby on Rails for Designers

Ruby on Rails is an open-source web framework that's optimized for programmer happiness and sustainable productivity. It lets you write beautiful code by favoring convention over configuration.

This is the way Ruby on Rails promotes itself - but in my words, it is an incredible framework that can really make your life much easier. You can learn more at their site http://rubyonrails.org 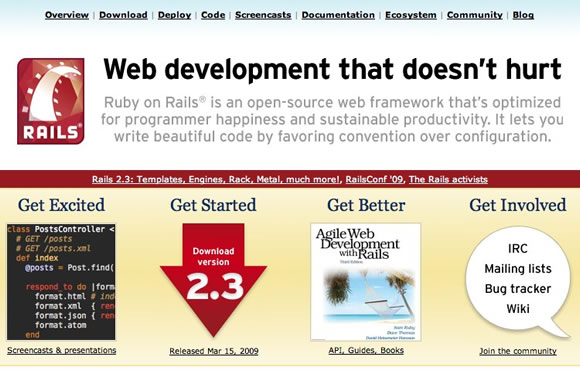 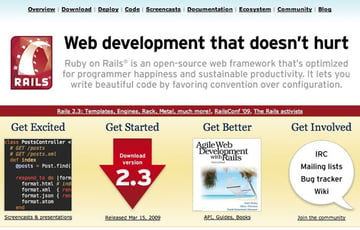 Installing Ruby on Rails (also often shortened to RoR) is fairly painless on most systems, but you will need to be comfortable opening up the terminal. The Ruby on Rails download page provides links to get started, and I will reproduce them here to save you a bit of time. Just as a note, these are the places to get Ruby, which is what Rails is programmed in, and we will be installing Rails in a minute. To learn more about the language, review the Ruby site

Now that we've downloaded Ruby, make sure you have RubyGems, which is a package manager for Ruby.

To test if you have RubyGems, run the following in terminal:

If you won't be using RubyGems, follow these steps:

If you have a Linux system, you should be able to install RubyGems through your package manager, but I prefer the method above. If you have any more problems, check out the installation documentation at the RubyGems site.

Now that we have the latest version of RubyGems, let's install Rails:

It will take a few minutes to install Rails and all of its' dependancies. 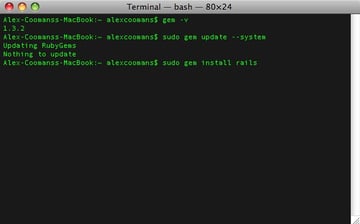 So now that we have Ruby, RubyGems, and Rails installed, let's create a project! To create a new project, you will use the Rails command to create new projects. We will create a simple project named "blog." Note: This will create the app folder in the current directory you are in terminal, so make sure you change into the directory you want the app to be stored in.

Next, open the project in your favorite text editor/IDE. I personally love TextMate, -while only for Mac OS X, there are some great clones which are also available.

The folder structure of a Ruby on Rails will look similar to the following:

There are three folders any developer or designer will need to work with on a daily basis: the app, config, and public folders. Please review the short explanations for each of the folders:

Step 3 - Getting your Hands Dirty

While the purpose of this tutorial is not to create an application, we will still do a bit of programming. Let's first create a controller named articles: (Make sure you have changed into the root of the Rails application)

Now open up the file, and you should see this:

All this code says is that we are defining a new class called ArticlesController that inherits from another class called ApplicationController. Now, we are going to create an action (referred to as a method strictly speaking in Ruby) name index, so when you go to http://localhost:3000/articles/ you will be shown something. Change your code so it looks like:

So now that we have an action, go to the app/views folder. We are going to create a view so when a user requests that URL, they actually see something. You may have noticed that there is a new folder in here named articles; this folder was created when we generated the controller. So, make a new file in the articles folder named index.html.erb. You may ask about the ending, the html refers to the type of file, and the erb refers to embedded Ruby as the templating engine. I personally prefer rhtml as it is a single ending, but that will be depreciated in Rails 3, which is planned to be released at RailsConf this summer. Put this into your new file:

The &lt%= %> tags may intrigue you. This tag is meant so that Ruby ouputs the results of the enclosed Ruby code. So this code will print the Time now. The other tag you will use in Rails is simply <%- -%>. This tag is meant for Ruby code that doesn't actually output anything, such as when repeating through items in an array.

Now we are going to create a layout to make this text beautiful. So create a file in the views/layouts directory named application.html.erb with the following in it:

First, before I explain the code, I do want you to know why we named the file application.html.erb. Rails will automatically load this layout every time unless otherwise specified. If you had named this layout "layout" then you would have had to add layout :layout to the top of the controller. This block of code has some important tidbits that you will want to know for when you are developing layouts.

Now, let's create a quick CSS file, named application.css in public/stylesheets, and put the following in it:

Now, we have a very simple application for displaying the current time; hopefully, you should be more acquainted with the basics of Rails.

You might be thinking, "This is cool and all, but how do I see the final product?" There is a terminal command that you need to run while in the base of the Rails application to start the local development server. script/server will start the server, normally on port 3000. Run the command and point your browser to http://127.0.0.1:3000/articles. You should see the following:

To stop the server select the terminal window and Control-C. This will stop the development server. As a note, make sure you never run a production server this way.

There is one last thing that I would like to show you. As I said before, the config/routes.rb file manages where requests go. Open up the file; we are going to make it so when you go to http://127.0.0.1:3000/, you see the same thing as before. Find the line, "# You can have the root of your site routed with map.root -- just remember to delete public/index.html." Under that section, add the following:

Save the file, and make sure you restart the web server. You will always need to restart the server whenever you create a new model, and change some other files that Rails stores in memory to speed up the server. Make sure you delete public/index.html, or just rename it. Now make sure the server is started and go to http://127.0.0.1:3000. You should see the same thing.

So now you should be a little more familiar with Ruby on Rails. I have also linked to some really great sites to refer to when developing with Rails. Have fun coding with Rails!

RubyWeb DevelopmentRuby on Rails
Did you find this post useful?
Yes No
Would you like to provide feedback (optional)?
Cancel Submit
Want a weekly email summary?
Subscribe below and we’ll send you a weekly email summary of all new Code tutorials. Never miss out on learning about the next big thing.
Sign up

Alex Coomans
N/A
Looking for something to help kick start your next project?
Envato Market has a range of items for sale to help get you started.