Some of you may have read his successful books. Others might keep track of him via his popular blog. Nevertheless, Jeff Croft is one of the leading advocates of web standards today. In this quick fire, Jeff will answer everything from his favorite music to his "web development pet peeves". Enjoy!

Who Is Jeff Croft?

Jeff has been working on the web for over 12 years. He began his career as a web designer in 1995, using SimpleText on Macintosh System 7 and Netscape 1.1N as his development environment. Since then, he has worked in several industries, bringing modern web design and development to places where you don’t always find it, including education and journalism. Beyond his work for Blue Flavor, Jeff is a blogger, author, speaker, critic, and industry thought leader. 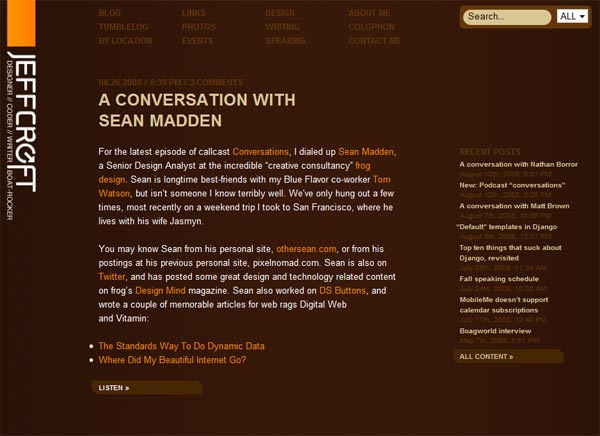 What City Do You Live In?

I consider Seattle, WA home these days. However, I am temporarily living near where I grew up, in Kansas City, MO, to tend to some personal matters. Hopefully I'll be back in Seattle soon.

My title is Designer, but I also also do a decent amount of development.

Hmm. Mexican. And seafood. And Mexican with seafood. :)

I studied music (specifically jazz) in college and sort of learned to like just about everything. But, my favorites genres are what I would call "black

I read a lot more general design books than web development books, but if I'm going to pick a webdev book, I would have to be obvious and choose Designing

With Web Standards, by Jeffrey Zeldman. Sure, almost everyone's read it by now, but it's the closest thing we have to a bible.

Who Are Your Web Development Heroes?

There are so many. I consider Mike Davidson to be a mentor, of sorts. He's helped me along more than he probably knows. And of course we all owe a lot to

some of the pioneers of web standards and CSS, including Jeffrey Zeldman, Dave Shea, and Eric Meyer. There are so many great people doing work on the web

today, there's no way I could name them all. 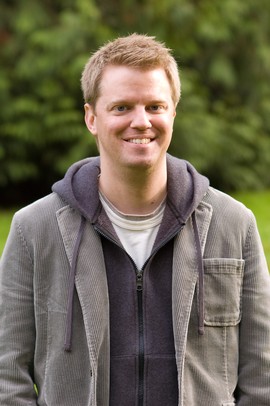 Hmm. I'm a pretty laid back guy -- not too much bothers me. But if I have to choose a pet peeve, I'd say it's people apologizing when they don't need to, and

therefore don't mean it. I hate it when people say they're sorry all the time. Grow a sack!

I would say my biggest pet peeve related to the industry would be people focusing on technology instead of design, standards instead of users, and validation

rather than innovation. Web standards and best practices are noble goals, but all too often in our community people forget they are a means to an end, not

What is Your Most Embarrassing Experience as a Web Developer?

I'm not sure if it really qualifies as "embarrassing," but probably my most regretful moment in my career was when I wrote a blog post that, when read by

others, seemed to imply that I had some objection to British folks. It was an attempt at humor gone horribly wrong, and I upset many of my English friends.

It was tough to deal with, because I really love all those people. Hell, London is my favorite city in the world! :)

Most Fulfilling Experience as a Web Developer?

I would say my most fulfilling experiences are meeting new people at conferences and industry events. I love exchanging, knowledge, I love meeting people, I

love traveling, and I love this industry. I just get a real kick out of being around a bunch of new people that are passionate about the same things I am. A

lot of times at these events, I feel part of something a lot bigger, and that's an awesome feeling.

Whichever is more appropriate for the job at hand. I'm a CSS guru of sorts, and I'm not much of a Flash programmer. So, I'm probably going to choose CSS most

of the time. But, Flash is a great technology that, when used responsibly, can be the perfect solution to many problems.

Okay, that's probably not fair. Again, it boils down to the situation at hand. What browsers you're going to fully support is a business decision first, and

a technology one second. You have to make that business decision on a case-by-case basis.

that is more reliably accurate when it comes to rendering things by the spec, and also a browser that has better debugging tools available. Personally, I use

Safari, but Firefox is clearly a good choice, as well.

What Technologies are you Excited About?

Django (http://djangoproject.com). The beauty of working in Django has made it hard for me to build a website any other way, these days. The fact that I have

infinite control and flexibility; that I can do *whatever* I want and not ever have the limitations of some CMS imposed on me; the fact that everything feels

so elegant and clean, and done the "right" way. Everything about Django and Python feels like it was made for a designer who my philosophy: that things

should be robust and powerful and subscribe to best practices, but never at the expense of being useful and usable.

I'm also really excited about @font-face font embedding, which finally feels like it may actually take off. It's nowhere near ready-for-primetime yet, but it

might finally have the momentum behind it to get us there eventually.

Favorite Javascript library - if any?

I don't write a lot of Javascript, but when I do, I look to jQuery.

Most Used Software when Developing?

TextMate. Photoshop. Subversion. That's about it.

I don't know if I can pick one question, but the most irritating things a client can do are:

Both of these things lead to a situation where the only choices are to terminate the relationship or produce something that sucks. I'm usually unwilling to

produce something that sucks.

New Book in the Works?

I can neither confirm nor deny rumors that I may be working on a book about web typography. ;)

For developers: get with the latest technologies, and don't fall behind. Get with modern, dynamic languages like Ruby and Python. Get out of your God-forsaken PHP rut, already. :)

For designers: learn about *design*. Remember that design is all about storytelling and communication, and not at all about writing good CSS or making cool

gradients. Learn about layout, color, and typography. Get over the idea that you're an artist. You're not. We do commercial work so that people can make

money. It's not art, and you'll do better work once you realize it.

Having read both of these books, I highly recommend them! Thanks again to Jeff for giving us this interview! Comment away.