Working in the WordPress community is both a blessing and a curse. Because of its open source nature, we have a fantastic platform on which to build websites, themes, plugins, and even applications. It's got a smart community around it, rich documentation, and standards that aim to provide the way to write code for it and the way to build tools around it.

At the same time, the open source nature of WordPress as well as the languages with which it's built allow anyone to ship their work regardless of if it is up to any kind of standard or uses any kind of best practice. For many users, they're none-the-wiser about what's going on under the hood. If the product works, they're happy.

As people who are serious about their craft, we absolutely cannot settle for "just getting it to work." We have to care about what's under the hood.

In this three article series, we're going to look at exactly what those are and how they apply in our project work. First, we'll start with strategies.

A significant part of building software is actually maintaining it after the initial launch. The truth is more time is actually spent in maintaining projects than building them. It makes sense, right? A product exists for far longer than it takes to create it, and, assuming that it's of high quality, then users are going to find bugs and request new features.

Unfortunately, a significant amount of maintenance time is spent on getting a bug resolved or quickly adding a new feature and is often done so in a way that is focused more on just getting it done than getting it done right. This isn't completely wrong either - when a product is tied directly to a business' bottom line, then time is a priority.

But there are things that can be done during initial development that can go a long way in making it easier to maintain a product after its launch. 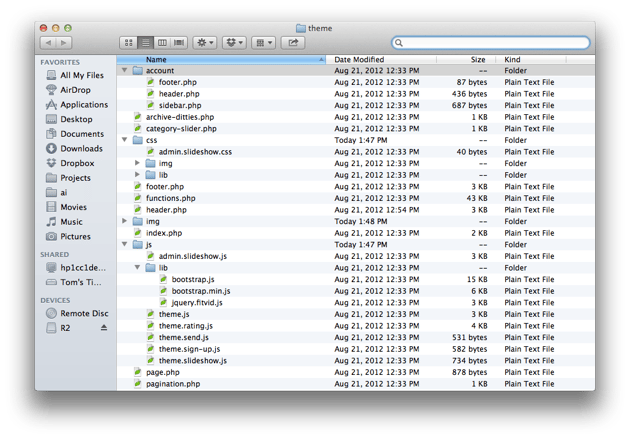 The WordPress Codex provides a comprehensive guide for how to build themes. It covers stylesheet guides, template files, JavaScript information, testing guidelines, checklists, and various references. Even if you're in the business of building themes, I highly recommend reviewing this list from time to time.

In addition to following the base set of guidelines, there are additional things that can be done to improve maintenance. Assuming that you're following the Codex guidelines for building themes, consider the following with regards to some of your assets and dependencies.

Granted, each theme requires at least a single stylesheet, but let's say that you're going to provide stylesheets specifically for the administrative dashboard. For maintenance, it's better to keep them separate than in a single stylesheet and then allow a tool to combine them before releasing them.

We'll be taking a look at tooling for exactly this in the final article in the series.

Regardless of where you land on this, doing a little bit of planning up front can go a long way to having a well-organized set of assets.

As we consider how to best organize our various assets, naming conventions can help provide a level of clarity and provide a standard by which all related files should follow. For example, in each of my projects I typically do the following:

Of course, there are some universal JavaScript and Stylesheets that are applied throughout the theme. In this case, I simply maintain a set of admin.css and style.css files.

Most WordPress developers know that plugins should be theme-agnostic. That is, they should not be dependent on a feature of any given theme nor should they impose any of their stylesheets or JavaScripts onto the existing theme except for their own specific feature.

On top of that, there are two ways to develop plugins:

To that end, there are a few strategies that can be employed when writing your plugins to make sure that the stylesheets, JavaScript, images, and other assets don't conflict with the existing theme.

When it comes to writing plugins, the various API's usually make it easy to mix and match the languages that you're using to build your plugin. By that, I mean that it's completely possible to include all styles, JavaScripts, HTML, and PHP in a single file and then ship it.

Typically, each language serves a specific purpose, and because of that, I try to keep each language in its own file as much as possible. Consider this:

As such, I believe that it makes more sense to keep the files separated so that you know where to focus when an issue arises or it's time to introduce a new feature.

This doesn't mean that you won't occasionally have PHP written in your markup or that you won't dynamically create HTML elements on the server side, but it's meant to provide a foundation off of which you organize your work.

In addition to making sure that each set of stylesheets and JavaScript files are clearly named, I tend to follow the same structure that I do for themes and that is to name the administrative-specific code prefixed with admin and theme or public-specific code with display.

It's a simple strategy but it goes a long way in optimizing where you place your files and in maintaining issues as they present themselves once your work is in the wild.

A Final Word on Strategy

The point covering this is not to impose my way of organizing files into your system or even saying that this is a standard way of doing it. It's meant to provide a starting point for which you can maintain your projects.

Ultimately, the point is to minimize maintenance as much as possible. Having clearly defined naming conventions and a standard of organization allows you to know exactly how and where to place your files without doing any guesswork and it allows your collaborators and/or team members to know where to focus to track down issues as they arrive.

One of the challenges that developers face is making sure that they are familiar with the proper ways to leverage the platform on which they're working.

For the most part, every language, framework, and library includes some form of documentation and WordPress is no different. The thing is, WordPress is composed of several different pieces - not only is the application built using PHP, but there are application-specific API's, as well as libraries such as jQuery that are necessary to have as references.

For the most part, that's it - bookmark those or have them readily available in your IDE (if it supports it), spend time in each of them, and you'll be well on your way to more professional development practices.

As far as strategies go, this covers it. Simply put, have a defined way to organize and name your files, make sure that you follow the best practices of the core WordPress API, and be sure to refer to the various language API documents when building your work, and you'll be in a far better position than simply building your work off the cuff.

In the next article, we'll take a look at various environments, version control, how they relate, and how they can be leveraged best in development, testing, and in final release.