Nettuts+ - A Year in Review (And What's Next)

Good gosh; another year comes to a close. Sometimes, it feels as if every year passes by more quickly than the one before it. Nonetheless, 2011 was a great year for Nettuts+. Here's why...

Honestly, these days, I don't focus on traffic too much. That might come as a surprise, considering that this is a blog that, yes, brings in income. However, I've come to learn that obsessing over traffic only translates to you spending less time creating content. I've never taken a stance, such as, "Next month's traffic needs to be up by 15%." It doesn't work that way.

Personally, I only use Google Analytics to:

Beyond that, I honestly don't see much point in obsessively focusing on traffic.

Dedicate your life to a given topic, write about it as well as you are capable of, and I promise that the traffic will come as a result.

To project numbers for 2012 would almost be a contradiction of what I just wrote. That said, I suppose it would be nice for us to continue reaching more and more people!

Nettuts+ was initially created with one simple goal: provide high quality, step-by-step web development tutorials. This year, I decided that we need to have more of a voice in the community. Initially, this took the form of me venting to an online journal... read by millions of people. Since then, though, the Editorials category has morphed into developers providing their own strong opinions on one issue or another. The reader is then left with the article (and the comments) to determine what his or her own views on the subject are. The most important thing is that it gets us talking.

I hope to provide even more opinion-based editorials on Nettuts+. My goal is that, when a well-known developer needs to get something off his chest - whether it be the state of the industry, the people, or the tools available - he comes to Nettuts+ to write and publish it.

I want Nettuts+ to be the central location for the web development industry to come together and discuss important issues and events.

One of my goals for 2011 was to have Nettuts+ branch out a bit. Yes, we have the blog, but what about books, tools, and apps? We're still very much in the early stages of these goals, though, we've made some good progress. 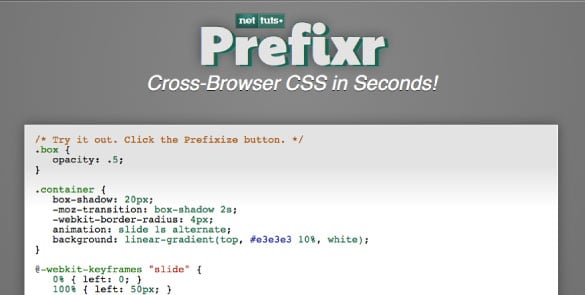 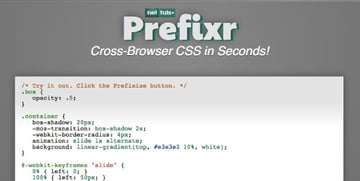 Prefixr was built out of necessity, and provides us with a way to automate the creation of all those tedious CSS vendor prefixes. Now, from your favorite code editor, you only need to type a shortcut key, and your entire stylesheet will be run through the Prefixr web service, and automatically optimized. No longer do you need to worry about which browsers support which CSS3 properties. Prefixr does that for you.

Unfortunately, it costs money to commission these apps; so we've experimented with selling them as cheaply as possible on the popular CodeCanyon marketplace. 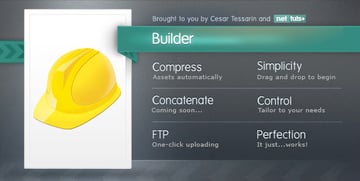 Nettuts+ Builder turns the process of compressing scripts and stylesheets, and uploading a project to your server into as simple a process as possible.

Let’s say that you finished a coding project or demo. Simply drag the folder onto the Builder menu icon, and it will:

If you’ve found yourself manually compressing your files and uploading them to your server, this automates the entire process!

Structurer is a wonderful project tempting interface for the Mac. It allows you to rapidly create directory structures with ease, and a few of the features include:

Branching out to provide apps and web services is a fantastic way to both spread your brand, and provide helpful services to your peers. In 2012, I'll be focusing on commissioning more cross-OS apps, and creating additional web applications and services. For example, I don't think that the online code snippet management and community idea has been executed well enough by anyone. Sites like Snipplr are helpful, but fall far short of what they could be.

The Best Way to Learn...

Newcomers are begging for these sorts of resources.

Something I've thought about quite a bit - particularly in the last several months - is syllabus based education. For instance, if you want to learn JavaScript, you have literally thousands of resources available to you. As amazing as that is, it's almost a hindrance; where do you start? Very quickly, you can become overwhelmed. Wouldn't it be helpful if you were given a syllabus by a pro? Want to learn JavaScript? Great - read this, then this, then this, follow and become friends with these people on Twitter, try out this first project, etc. Newcomers are begging for these sorts of resources.

As a first step, we've created a series tailor-made for this group of people: The Best Way to Learn.

We're only four entries in so far; in 2012, I'd like to increase this number to cover all sorts of languages and tools.

While Nettuts+ is a part of the Envato network, when it comes to the day-to-day management, it had always been little-ole me at the helm. Thankfully, this year, Siddharth has come on board as my assistant, and has been doing an excellent job. In addition to helping me edit and publish articles (so that I can focus more on Premium courses and books), he's also the man behind our fun Nettuts+ Quizzes that you guys seem to enjoy. He's been a huge asset to the site.

I hope to transition Sid into more of a co-pilot, rather than assistant. It'll be nice to reach a point when we are both responsible for finding, commissioning, and scheduling top quality content.

Take the Nettuts+ format (step by step tutorial), and translate it to a live, real-time coding tutorial on stage.

A few months ago, when speaking at a WordPress meetup in New York, I experimented with a format that I call "Nettuts+ Live." The basic idea is that you take the Nettuts+ format (step by step tutorials), and translate it to a live, real-time coding tutorial on stage.

For my presentation, I discussed WordPress custom post types and taxonomies, and how they can be used to extend your WordPress application. Now, in hindsight, I'm not sure I would do it the same way again. Coding from scratch in front of a hundred people is very, very difficult. With that in mind, I think I did quite well, though there were a few points when I had to stop and stare at the code blankly for a couple moments...desperately trying to determine what typo I had made.

And then, when I finished the presentation, I was met with the realization that only a handful of the people in the audience were actual coders; the rest were mostly WordPress users. Yikes!

Nonetheless, I think the format has merit, if molded a bit more. In 2012, I'm going to experiment with more local meetups and this format. No slides; just a code editor, a speaker, and lots of questions from the audience along the way. It may crash and burn, but it also may...not!

As part of the newly relaunched Premium brand of Tuts+, Tuts+ Premium, I'm the head of web development courses. Mostly, what this translates to is me creating the best possible content for learning how to be a web developer - in video form.

Particularly in the last few months, I've immersed myself in the art of screencasting and teaching. I've watched countless video tutorials around the web to determine what I enjoyed, what it irritated me, and what makes me press stop. At a glance...

At the moment, I'm still working to get the bread and butter courses up on the site, such as CSS3, JavaScript, jQuery, PHP, etc. Once the staples are finished, we'll transition into more specific courses, such as Backbone Essentials, CodeIgniter, Dojo, etc. It's a really exciting time to be a Tut+ Premium member.

Changing the Landscape of Online Education

Brick and mortar colleges are dated, and incredibly expensive.

Nettuts+ began in 2008, when Envato was still referred to as Eden. Since then, the site has come a really long way. My favorite part has been the process of determining and defining exactly what sort of site it is. I love that we offer video tutorials, and sessions, and in depth articles from some of the most respected developers in our industry. Every time one of my dev heroes links to a Nettuts+ article, it makes me feel amazing. This site will continue to grow; so "stay the course" is the name of the game for Nettuts+ and 2012.

Tuts+ Premium has taken the first step. The next one will be a significantly larger leap forward.

For me, I want to redefine the landscape of online web development education entirely. I want to take the basic college experience, and translate it to the web. No, I'm not talking about keg parties, I'm talking about a community for students.

I've heard it too many times: "My college hasn't taught me a fraction of what Nettuts+ has in two weeks." I'm not being conceited here; replace Nettuts+ with any popular web development blog, and the outcome will still be true. Because our industry is accelerating at such an incredible speed, traditional schools and professors can not keep up. Brick and mortar colleges are dated, and incredibly expensive.

I want Tuts+ Premium to bridge the gap: provide students with instructors, courses, quizzes, assignments, one-on-one lessons, certifications, and forums to learn and collaborate with their peers. In its current form, Tuts+ Premium has taken the first step. The next one will be a significantly larger leap forward.

This final question is for you, John Q Reader. How can I make Nettuts+ the best web development resource on the web? In the last three years, we've come a very long way toward this goal. How can I take it further? What do you need more of from us? In return, I promise we'll do our best to provide it. We're currently working on the next design for the Tuts+ sites; your input will help define the shape it takes!