2011 has been a great year for the mobile web. Toolkits and libraries matured, new tools arrived, and a whole bunch of plugins made building web-based mobile applications easier than ever. Read on for a roundup of some of the most significant releases and events in 2011! 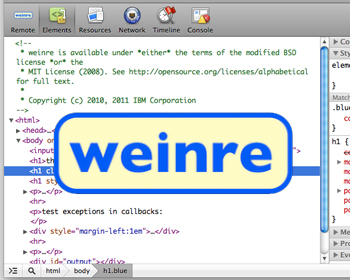 Weinre was initially released in December of 2010, but it wasn't until 2011 that it got some legs and became the best remote inspector that does for mobile developers what all those great things that the WebKit/Chrome developer tools offer for desktop development. Easy to use and a true lifesaver at times, I'm not to sure I'd be able to develop without it!

If you don't want to download Weinre, you can just use the PhoneGap hosted version located here. 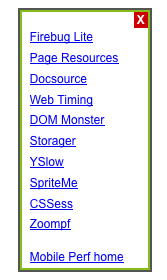 Steve Souders works for google on web performance and was the creator of YSlow. Souders released the mobile performace bookmarklet that can be easily used on mobile devices to get access to various bookmark lets, including Firebug lite, SpriteMe, Webtiming, and DOM Monster. You can also connect the apps to a jDrop account and get a report delivered to the account to be read on a desktop computer instead of being stuck trying to read everything on a mobile screen.

Matteo Spinelli has given a lot to the web development community as a whole, and he has created some really great tools for mobile web development too. He is perhaps most well known in the mobile world as the man behind iScroll, which originally gave mobile web apps the ability to have fixed headers and footers like what users were familiar with from native applications. This year, Matteo released iScroll 4 as a complete rewrite. The result was a smoother interface and new features such as pinch/zoom, pull-to-refresh, snap-to-elements, and additional custom events.

iOS 5 was finally released and offered one significant enhancement to mobile Safari: the abiity to have position:fixed work as anticipated in CSS. It seems like a small thing at the moment, but it paves the way to a better and more predictable future for web apps.

jQuery mobile has been the talk of the web since its initial release, and in 2011 it continued to grow and finally made it to an official 1.0 point release. Following in the footsteps of the popular jQuery library, it is simple to get up and running very quickly. The project is very well documented and the team behind it is great at communicating through the forums. While it is strictly a UI library for mobile development, coupled together with something like Phonegap, it makes mobile application development using HTML, CSS, and Javascript a whole lot easier than it was even just a year or two ago. 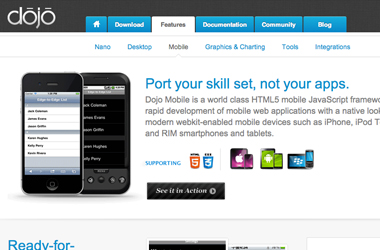 The Dojo toolkit is a very popular one for building web applications. While it may not be as commercially popular as other libraries, Dojo does offer a lot of functionality and in some cases is a much better tool than the alternatives. Bundled with the toolkit release is everything you will need to start building web apps under the dojox.mobile namespace. You will probably need a little bit of exposure to the Dojo toolkit before diving into building mobile apps with it, but once you get started, it's just as easy to use as jQuery Mobile or other alternatives. Check it out here.

Mulberry is probably my favorite release in the mobile web app ecosystem this year. Not only does it stand out as being one of the quickest ways to get a functional app up and running, but it also paves the way for more app generators. I think that we will see more tools following in the footstep of Mulberry in 2012, but the team behind Mulberry continues to work hard and will no doubt release additional improvements as well.

Although now almost 4 years old in 2011, PhoneGap has continued to improve and become the go-to tool for web developers looking to build native applications using the languages that they already know. In 2011, the PhoneGap team raised their support for more features accross more mobile operating systems. Nitobi, the company behind PhoneGap, was also aquired by Adobe, who made the Phonegap codebase part of the Apache Software Foundation. As 2012 moves in, PhoneGap will likely become one of the most used tools for mobile development.

Finally, Adobe officially announced that they would cease support and development efforts on the Flash plugin for mobile devices, and would instead move forward with their HTML 5 efforts. It may not have been a shock to some, but it has shown Adobe's commitment to supporting more open web technologies and is a significant event for the industry. 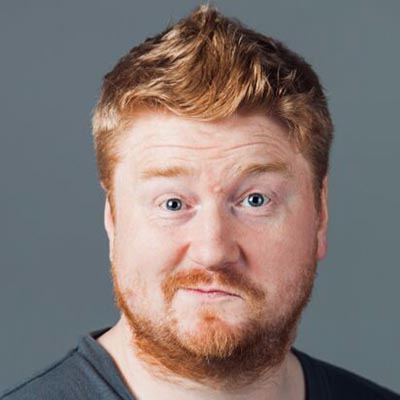 Shaun Dunne
London
After having worked for 8 years building Web and Native things for numerous agencies, I decided to set up his own company with a long-time colleague to build things that excite us and made work fun again. Not a Polyglot, more of (Programming)Language Buff who enjoys tinkering in code.
shaundunne
Weekly email summary