To quote his blog Commented Out, Kevin Suttle is a Flash Platform developer based in Cincinnati Ohio. He specializes in ActionScript, Flex, User Interface Design and Experience Design. He's a hugely active member of the Flash Community and recently I caught up with him to ask a few questions..

QTell us about how you got started with Flash and what attracted you to the language?

I always find it interesting to hear others' answers to this question. For me, I never set out to build RIAs. I got into digital art during my time at the University of Cincinnati. I never had any programming or computer science classes (and still don't). I actually only had one class where Flash was taught, and honestly, I didn't pay much attention. At the time, I never thought I'd use it. I was using Director quite a bit though, which is funny now that I look back. [Laughs].

At first my "art" was strictly illustrations and manipulations of my photography, but I found myself wanting the expression to go further. So, I started working on these short, artsy film projects. They weren't great, but honestly, they weren't for anyone else. I integrated some heavy audio production, because music is such a staple in my life, but still, I felt like something was missing. That's when I found Flash. I needed to be able to manipulate my creations. I grew to become fascinated with UI design, Interaction Design, and User Experience studies, all of which are perfectly malleable thanks to the Flash Platform.

QYou have been very involved in the Adobe Pre-release program. Of course you can't talk about your specific contributions, but can you tell people why you feel the program is important and how it helps shape the future of the IDE and platform in general?

Yes, I have. It is an absolute honor to be invited to help shape the future of Flash, and I personally have taken it very seriously. I have always been very passionate about making the things we use on a daily basis better, not just software. And after the article I wrote about my concerns with the Flash IDE, I received a chance to let my voice be heard, directly by Adobe's ears.

I have suggested almost 150 bugs/feature requests, and in the process I learned a TON about Flash, Adobe, and real-world, large-scale software development in general. For example, if I make what I see as a small feature request or bug fix suggestion, and I receive feedback that it can't/won't be done, naturally, I'd like to know why. Through the team, and some incredibly intelligent veterans of the Flash community, you begin to understand what's going on under the hood of the Flash IDE and engineering and really take that into account the next time you ask for something. Even the smallest additions or fixes require many rounds of review from many different parts of the product team. There's a lot more than just adding your 'Make me coffee' component. [Smiles, scratches beard].

I also think there are a lot of misconceptions about the Pre-release Program. It's not only the Flash elite or "favorites". Heck, I'm in there! It's also not a place to whine and cry about things you feel are important or need to be fixed without contributing something valuable as a suggestion. You're going to have that in any product program, but when it comes to the Adobe Pre-release Program, the community needs to be aware that it's a privilege, not a right. Sorry, just needed to get that off of my chest. Adobe takes some unneeded flack for it.

QTell us about how Twitter has played a role in bringing your name to the forefront of the Flash community and how you are using it to help brand yourself as a community expert.

Twitter is by far the most powerful networking tool in the history of all recorded time. [Looks around. "Am I right?! Eh? EH?"] Just kidding. It's cool. But it has presented me with several exclusive opportunities. I have won books, VIP seating at MAX, a ticket to FlashPitt, where I won a copy of FDT, the list goes on and on. It has also helped me get my name out into the community. However, I like to think I have some sort of knowledge and perspective to back up any attention I receive. Twitter is a interesting social experiment in self-marketing. There are Twitter rock stars who only exist within the public timeline, and don't give back or add anything of their own. There are also those at the opposite end of the spectrum, who think that the only thing worth talking about is themselves. I like to think I've found a happy medium and have leveraged Twitter by blogging/tweeting what I think is fresh and unique content, and then allowing the Twittersphere to decide whether or not it gets distributed. To me, that's the best way to measure the success of my contributions.

Twitter is also really great for identifying and enforcing the sense of family within the Flash community. I have also made some great friends through Twitter, present company excluded. [Winks, laughs awkwardly.]

As for the "community expert" label, I wasn't nominated for Adobe's Community Expert program this year. While I initially was super disappointed, I'm actually glad I didn't make the cut. It means I need to work harder and contribute more this year.

QYou have been contributing greatly to shaping the Flash And The City conference behind the scenes. Tell us about why you chose to donate your time to this cause and what you think will make this conference different to others?

What initially drew me to Flash and the City was the fact that Elad Elrom was putting it together as just another member of the Flash community. He had no agenda or corporate affiliation, and still doesn't. He just wanted a truly community-driven event. Then, when I saw how creatively and uniquely designed it was, I was really intrigued and told myself that I had to participate in any way I could. At first, I had just planned on speaking, but the more I talked to Elad, we realized that we shared the same vision for what the event should be. Now, I'm handling a lot of communication with the speakers, helping organize and plan, and I'm working on several Flash-based projects built for FATC as well. Working with Elad, Jose Marquez Antonio Russo, Thomas Joos, and THE Jesse Freeman, building the event's brand is really exciting. There are some fun surprises that I think everyone involved, as well as the Flash community at large is going to be really proud of.

FATC is going to be epic because of the networking opportunities, helping new Flashers get up to speed, and giving seasoned pros some new inspiration to reinvigorate their development processes. There are so many things planned that will really make people glad they made the trip to New York. There are a lot of things I can't talk about yet, and I personally cannot wait!

QYour post on insideRIA highlighting the AIR 2.0 and Flash Player 10.1 touch features was well received. Tell us about what attracted you to the topic and what you hope to play with first when it is officially released?

That article was like my personal thesis. I spent almost 6 months researching it because I wanted to be able to create touchscreen content as soon as I could. I think I mentioned this in the article, but in my mind, Flash was always meant to be interacted with physically. I still see Flash as an artistic medium, and when you bring that direct, tactile connection to it, it becomes so much more compelling. Look at what the iPhone and this [bleepity-bleep] tablet have done for multi-touch. Consumers expect it now. I'm so glad that Flash will finally be able to exist on that level and bring rich, innovative experiences to users on [cough] almost, any platform. I have a lot of ideas for data-visualization and UI hybrids that I'm hoping to release later this year. Stay tuned!

QTell us what is your favorite part of Flash and what do you feel needs more attention in next version of the Flash Player?

My favorite part of Flash is the community. Seriously. Not just because it's full of really awesome people, but the fact that the community is what drives adoption rates, new APIs, and the authoring tools. Our relationship with Adobe is mutually exclusive and I love it. People in the community push the envelope in Flash. I think of individuals like Sean Moore, who I just saw demoing a brain activity API, or Robert Penner who has shifted the paradigm of the Event model with Signals. There are countless Flashers that I am inspired by on a daily basis, and I am hoping to contribute more to the open-source world this year as well.

To better answer your question, my favorite thing about Flash as a platform is the versatility. There are so many things we can do with Flash, and quickly. Flash is on microwaves, cars, TVs, DVRs, the list goes on and on. We all like to nitpick now and then about certain hiccups, but if it were really that bad, we'd jump ship. Flash enables you to create memorable user experiences, jaw-dropping 3D generative art, and silky smooth user interfaces. The biggest misconception about Flash is that it's limiting. If anything, it affords you the freedom to create whatever your imagination can conjure up.

As far as the next version of Flash Player, there are a few things on my wish list. Obviously, it can never get too fast, so performance is always at the top of my list. Mobile is on it's way to becoming the first stop in development processes with AIR Mobile, and Flash Player 10.1 is supposed to be dramatically faster than 10.0, which will be really nice. Beyond that, I'd love to see Flash become a first class citizen to those who don't embrace it now. There is this whole HTML5 thing going on and many developers are proclaiming the death of Flash and that the iPad is the coffin it'll be buried in. I personally, disagree completely, but that's a separate blog post. We need to find ways to move the web forward together. I think the web is at a pivotal point, and that Flash needs to adapt to continue to thrive. I'm not going to say that Adobe needs to Open Source the Player, but there are some really clever people out there who can figure out ways to better integrate Flash with more semantic HTML content. The future is definitely going to be interesting, and I can't wait to be a part of it.

Thanks for having me! 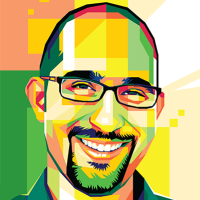