Like it or loathe it, a new release of Microsoft's Internet Explorer is upon us once again. For this eighth iteration of their browser, they are focusing heavily on security, ease of use and improvements in RSS, AJAX and CSS. That's a rather general outline, so we'll dive into these new features for a closer look. 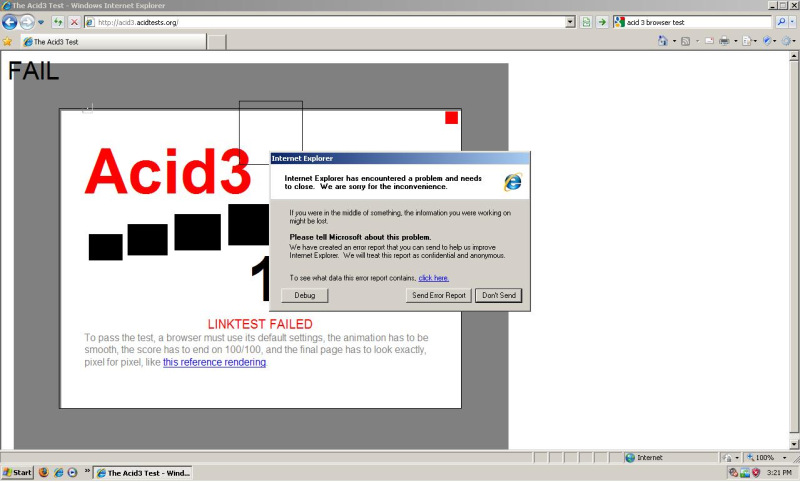 Despite reporting a 100 score on the Acid2 test months ago, IE8 has subsequently registered a sloppy 20/100 on the Acid3 test. Compare that to these recent scores:

In fact, many users are reporting scores as low as twelve. This is shocking to say the least. For those unfamiliar with the acid tests:

"Acid3 is a test page from the Web Standards Project that checks how well a web browser follows certain web standards, especially relating to the Document Object Model and JavaScript."
- Wikipedia

The first on our little list of new features in IE8 is InPrivate. As its name might suggest, it is a feature similar to the Incognito mode in Google's Chrome or many of the Firefox extensions that add stealth mode functionality. When this mode is activated it stops Internet Explorer from storing your browsing session. It stops storing your history, cookies, temporary Internet files, form information and any passwords you may have entered. When you disable the InPrivate mode there is no record of your private browsing session. This is a great mode to use when searching for gifts, banking on-line, or other private things.

Next, we have "Suggested Sites"; think of it as a kind-of built in Stumble Upon - almost. It's not enabled by default and is turned off during your InPrivate session. Essentially, it sends information back to Microsoft about the sites you visit. Microsoft then returns suggested sites to you that you might find interesting.

Though this could impose upon your privacy, Microsoft have stated that the suggested sites are per-session and that anything that would make the client, you, identifiable aren't logged. The suggested sites feature worked well and showed me sites that were in the same niche as I was interested in.

You get the idea; it works pretty well at expanding your "internet horizon". 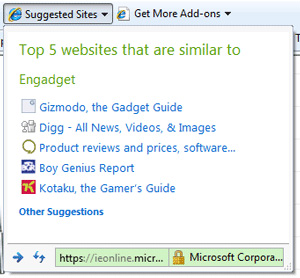 Increase Your Browsing Speed with Accelerators

One of the bigger features which has gotten many people interested in IE8 is the accelerators. An accelerator is an action that is performed when you highlight a particular piece of text on a web page. Just as the name suggests, it's supposed to speed up some of the mundane tasks we perform - like looking up something on Wikipedia, translating text to a different language, emailing a small excerpt of a site to a friend, and even posting to Twitter. These can all be performed very easily with some of the built-in accelerators, as well as the newly launched Add-ons site which hosts many more.

When I tried the accelerators, they worked well and helped quite a bit. It takes a little getting used to as, rather than highlighting the word and right-clicking to bring up a menu, you click on a little blue box that appears to access the different accelerators you have installed. However, once you get into the groove, it can become quite powerful.

Slice and Dice With Web Slices

Think of web slices as a kind of RSS feed - but they actually display a small portion of the site rather than just text. For example:

It's a nice little feature, and will be interesting to see what different sites can come up with to take advantage of them. 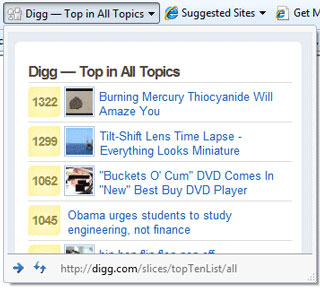 Web Slices also auto-update - like an RSS feed - and when there is an update, the text is displayed as bold on the Favorites bar. It doesn't appear as if there are many slices available at the moment, but it should catch on soon enough.

It's great to see Microsoft evolving its security technology in Internet Explorer. I'm guessing a majority of users won't understand phishing and this filter will hopefully save a lot of people from entering their PayPal details into an impostor site.

It's What's Under the Hood that Counts

These are some of the bigger and more apparent features that are included in the latest version of IE, but there are many new, less obvious, features that are working in the background. One of the things I really like in the new IE is how they've taken a path similar to Google's Chrome with their sandbox implementation.

This means that each tab running in the browser creates its own process within Windows and if a page crashes, the entire browser won't be taken down with it. If the entire browser was to crash though, there is also a new tool which allows you to choose which tabs you want to recover. So if you knew a particularly heavy Flash site was causing the problem, you could simply choose not to recover the troublesome site.

There have also been some small, but welcomed changes to the organization of tabs. Say you are visiting eBay and you click a link which opens a new tab; IE8 will know that the new tab is related to the site that opened it. So it will color both the tabs the same. Another subtle change is that, like Chrome, the address of the site is now colored; the domain such as Envato.com is a solid black color while the rest of the address is a light gray color. Chalk this update to improving security as it helps you to identify the real site, as opposed to one that is using some sub-domain trickery.

Sites Not Ready for IE8? Use Compatibility Mode

There has been a push to improve the performance of the HTML parser, CSS engine and JScript run time. As well as performance there has also been a push to improve the rendering of content authored to web standards. In order to ease the transition from IE7 to IE8, Microsoft has created a meta element which when used in a website causes IE8 to run in a compatibility mode and render the page as if it was running in Internet Explorer 7. This will allow a little more time to ensure that a site is ready for IE8.

On the developer side of things, Microsoft has also included a debugger for CSS, HTML and Javascript. It's not as nice as the likes of the Firefox extension, Firebug, but it gets the job done and lets you see what's going on underneath the glossy exterior.

Internet Explorer 8 is a welcomed update, and it's nice to see how Microsoft has improved their standards implementation - somewhat.

What issues have you had with this browser? Have your current sites broken? Which feature are you happiest with?


GeneralWeb DevelopmentIE8
Did you find this post useful?
Yes No
Would you like to provide feedback (optional)?
Cancel Submit
Want a weekly email summary?
Subscribe below and we’ll send you a weekly email summary of all new Code tutorials. Never miss out on learning about the next big thing.
Sign up

Scott Stewart
N/A
Looking for something to help kick start your next project?
Envato Market has a range of items for sale to help get you started.