Native extensions are basically a way to extend the capabilities of AIR. We have it already on the desktop versions of AIR. You can write a small piece of native code and bundle it with your AIR application. For iOS it would be Objectionable-C and for Android it would be Java. There will be an AS3 API to allow you to talk to the native code.

In all seriousness though- there are documents that can be found on the public web right now which detail how native extensions for AIR (for TV) currently function. Really interesting stuff and I can only imagine how this and other massive improvements in the next major(?) release of Adobe AIR will enable developers to do even more with the platform. It's a great time to be a Flash Platform developer! 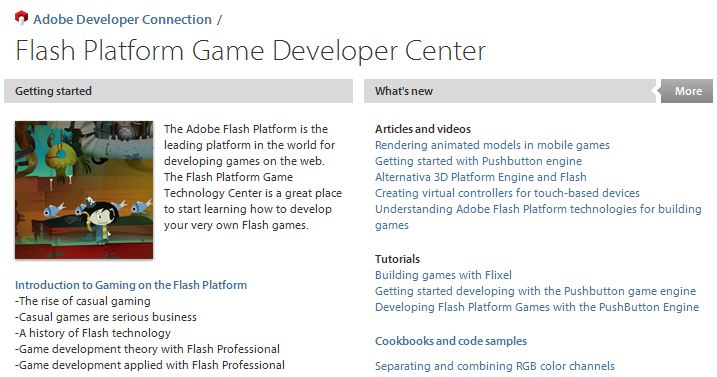 The Adobe Flash Platform is the leading platform in the world for developing games on the web. The Flash Platform Game Technology Center is a great place to start learning how to develop your very own Flash games.

There really are some great starting points here for those wanting to explore game development with the Flash Platform, especially since the new Stage3D ("Molehill") APIs and related frameworks will be highly geared toward this sort of development early on. I have no doubt that this addition to the platform will be as big as video was in 2006!

National Jukebox: Historical Recordings from the Library of Congress

This is an interesting project put forth by the United States Library of Congress called the National Jukebox. Interesting thing is they have a solid little Flash based playback for the audio!