How's that for a tantalizing post title? This week's industry news features Adobe's adoption of HTTP Live Streaming (HLS), the role of celebrity gossip in the Flash community and takes a glimpse at the Flex Spoon Project.

During the National Association of Broadcasters conference (NAB) last week, Adobe gave a sneak of some upcoming video streaming technology which is expected to become part of a future Flash Media Server product. 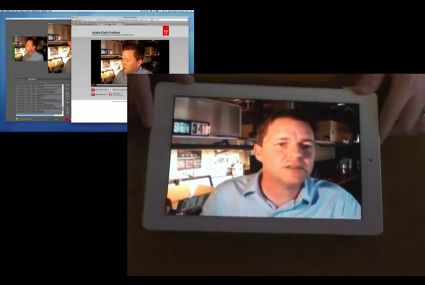 The technology demonstrated uses HTTP Live Streaming (HLS) which is a form of streaming technology that chunks data into tiny packets for transport over the normal HTTP protocol while also allowing multi-bitrate support for varying devices and connection speeds. HLS is already supported by Apple, Microsoft, Wowza, and others as a part of their particular streaming solutions. The addition of HLS in Flash Media Server continues to push FMS forward in the streaming video space through additional streaming options. You can bet this isn't the only new technology Adobe is working on in this area either.

Unfortunately, as with all Adobe announcements, there are those who want to spin it into another "Adobe vs. Apple" battle. A number of tech writers basically produced articles which contain an enormous amount of misinformation; claiming that "Flash Video" will now play on iOS... or that Adobe is once again bowing down to Apple... caving... throwing in the towel... you get the idea. In reality, Adobe is simply offering an additional method of streaming video in an attempt to reach a greater amount of screens and provide FMS users with the most options possible. 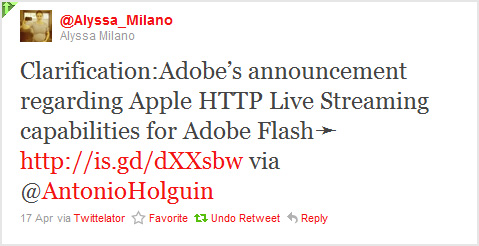 An interesting side note in this story came when celebrity figure, Alyssa Milano, tweeted one of these poorly researched articles, spreading such misinformation to her 1.5+ million followers. A few members of the Adobe community requested that she also offer an alternative perspective in the form of Robert Reinhardt's article on the subject. Surprisingly, she did as requested and gained the respect of a whole bunch of Flash developers. Kudos to her for responding to our (somewhat aggressive) requests in a reasonable way!

It was announced at 360|Flex in Denver that Adobe and the Flex community would be collaborating on a new foundation called the Spoon Project. The primary aim of this project is to allow community contributions to the Flex SDK.

Spoon is the codename for a project started by the Adobe community to capture the collective experience of those individuals implementing solutions on the Flex framework and to apply that knowledge in a constructive manner through defect patching, feature contribution and addressing aspects of the framework that limit extensibility.

The foundation was detailed as having a similar structure to the Mozilla Foundation, in that it will be governed by a Board of Directors who oversee the process of further authority and have responsibility for distribution to contributors based upon merit. That is, the more a volunteer contributes, and the higher the quality of those contributions, the greater the merit will be for that volunteer. Adobe's role in the foundation will exist around project vision and guidance at first, with fewer dealings with the foundation as time passes.