Don't Drink Your Own Kool-Aid

Life is about passion. Itʼs too short, too unpredictable, and too valuable to waste. Yet most people continue on with their lives hoping that one day theyʼll magically have more time, money, and talent to pull off that idea they know will make it big. The problem is, that rarely happens.

When I left college five years ago, I was talented, a bit arrogant, and eager to take on the world. I didnʼt need a degree to make me successful, and, given that I had a steady stream of freelance income, I decided to take the first large risk of my life and enter the world on my own. Fast forward through four difficult years of freelancing, and say hello to StoreSync, my second startup. My freelance career was spent largely working with e-commerce clients, and one day in the shower the idea hit me: wouldnʼt it be great if storeowners could manage their stores from their mobile devices? I developed the idea over the course of 8 months and then sold the business to Shopify, where I now lead mobile development.

Is your idea worth pursuing?

Some of the best advice I received during my startup process was from Monroe Chirnomas, a wealthy and seasoned inventor with eighty-plus patents under his belt (if you like ice cream from a vending machine you can thank him).
“Donʼt drink your own kool-aid,” he said. His point was to not get too caught up in an idea, but to think objectively and leave out emotion.

I had over 200 people signed up for the StoreSync beta within two months. At the time, that number was staggering considering I did zero marketing aside from a few posts in a couple forums. I was so fired up and passionate about my idea that I fell victim to drinking lots and lots of my own kool-aid. At my rate, I was headed toward having a fruit punch bowl for a head and busting through walls screaming “Oh yeah!” while kids screamed for a refill. No other app in the world existed like mine, and I allowed myself to think that fact alone was enough to make it revolutionary and worthy of a hefty of investment.

My advice is to not write your first line of code or even open Photoshop until you do your research (and by research I donʼt mean having your friends and family tell you how awesome your idea is). One of the best things you can ever do is to think intimately about your potential customer. How old are they? Where do they live? Whatʼs their morning routine like? Whoʼs on their iPod (or CD player)? What do they like to eat and drink? Where do they spend most of their time?

It is vital that you get to know your customer before you try and sell them something. Perhaps more importantly, be sure you know yourself. Do you really have the drive to stick this through until the end? When the money runs out, when you havenʼt seen your friends in weeks, when you look out the window to see the sunrising for the third day in a row, when thereʼs no one telling you to keep going. . .Do you have what it takes to press forward?

I had the opportunity to pocket $30,000 in exchange for 30% of my company before I had ever made my first dime. For most people, thatʼs a great deal. But for me, it wasnʼt enough. I wanted $100,000 for 25%. The would-be investor at first responded with shock, but then quickly asked what I would do with all the money. I responded that I would spend $30,000 - $40,000 on operations and marketing, pocket $30,000, and leave the rest in savings for the company. Wrong answer. I now realize that my potential investor didnʼt think his investment would be directly benefited by me taking 30% as a personal gain. Now that Iʼve moved on from that business, I can clearly see his point. That much money in my pocket wasnʼt going to benefit the company as a whole, but rather only my own bank account. While the two were related, the money could have been much more wisely spent.

Instead of taking on outside money, I was fortunate enough to have two hard working parents with some savings. “The most we can do is $10,000, and thatʼs pushing it”, they told me. It was a gamble for both of us, as I was inviting my parents into not just my personal spending, but how I made a living with the business.

$14,000 and 4 months later the money ran out. Teary eyed I stood in my parents kitchen as we discussed the options. “Go back to school, itʼs not too late” my dad often said. In addition to school, my parents encouraged me to move to Atlanta where the job market was more established for mobile and web developers like myself. But I wouldnʼt give up. No, not yet. You canʼt give up just because life gets hard and people tell you that you canʼt do something. My parents never told me I couldnʼt do it, yet they were obviously worried about my wellbeing.

For me, the lure of a backup plan was too dangerous. If I knew I had a job waiting on me, for example, I would have perhaps tried that much less to make StoreSync work in the first place. When your back is against the wall, youʼre likely to give up if you can push a button and make it all stop. Iʼm not saying bury your head in the sand and ignore reality, but I do feel you have to be wise when it comes to reality and knowing when to say when.

Despite having over 200 beta testers at launch, it proved difficult to convert them into customers. My prices started at $10 / month, and though in my eyes this was a bargain, my product didnʼt demonstrate enough value to enough of my market quickly enough to justify the operational costs of the business and my personal expenses.

Given that my product supported numerous e-commerce platforms, I pestered many of them to help market my product and show public support. Shopify was the first company I approached as I felt their target market aligned strongly with the market I saw using my product. Shortly after posting a forum post about the product, my now boss Tobias Lütke (Tobi) replied with praise. "An in," I thought, thatʼs all I needed.

When the money started to run out, I more aggressively negotiated with would-be investors and purchasers. Initially, Tobi wasnʼt keen on the idea of an acquisition. I kept at it. We discussed a few different options, and after a month or so, I got the email Iʼd been praying for. Tobi emailed me a proposal to acquire my company and offered a full-time position leading mobile development for Shopify.

I wonʼt go too deep into negotiating tactics, as Tobi and I rather quickly came to terms. I will however say this: you havenʼt negotiated enough until you hear “no.” Start higher than you expect to get, be confident, but also realistic. Had I told Tobi I wanted $500,000, there likely would never have been a response e-mail from him in the first place. Rather, I looked at what I had invested in time and money, what I owed my family at that point, and what I felt was a fair profit. In the end, I didnʼt become a rich man, but I was able to pay off all my debt, work on my home, and have some money in the bank. It was a fair trade.

Decide ahead of time how much youʼre willing to invest in money, time, and sanity. The stress of running a business and the toll it takes on your physical wellbeing can at times be overwhelming. However, the joy of seeing an idea that you had in your shower grow into a business is hard to put in words. It was awesome to see TechCrunch, among others, pick up on the story, and I instantly felt validated in ways when the sale was complete. I was no longer trying to prove myself. Iʼd made it.

Iʼve often felt itʼs hard to teach someone to be an entrepreneur. While you can learn a great deal from books, I strongly feel you have to have a certain drive inside of you that canʼt be taught. For example, as much as I love music, Iʼm not a naturally talented musician. Sure I can play a few songs on my guitar, but I mostly try to reproduce what I hear rather than making my own music.

This is very much like starting your own business. You can read the right books, take the right classes, and even have the right board of advisors. But if you can only read music and reproduce, youʼre missing the point. Accomplished musicians are not those who can just read music and play a note. As hard as I may try, Iʼll never be a singer (the people sitting in front of me at church can attest to that). While I feel business is certainly an art that can be honed and learned, again, I feel we have to be real with ourselves.

Tobi once told me over dinner that he didn't see himself as an entrepreneur. He saw a hole in the e-commerce industry and developed a solution. Through the productʼs success, he was able to hone his business craft and is now a respected member of the technology industry and the leader of a multi-million dollar company. But while he may not call himself an entrepreneur, he did what every entrepreneur does: he saw market potential, and he went after it. Tobi is a great example of an unassuming entrepreneur. Too often today I see people getting off on saying they're an entrepreneur rather than actually being one. I got a good laugh hearing a local student say he was a “future serial entrepreneur”.

Whether you think youʼre an entrepreneur or not, you likely still have what it takes. The bottom line is if you want to do it, then do it, but be smart at the same time and donʼt let emotion cloud your judgement. In other words, donʼt drink your own kool-aid. 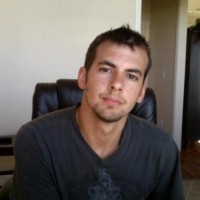 Matt Newberry
Matt Newberry is the creator of StoreSync (now Shopify Mobile), an iPhone application that empowers merchants to manage their online store from wherever they are. Matt is currently the mobile development lead for Shopify, who acquired his company in 2010. He can be found on Twitter and GitHub.
Weekly email summary