Jonathan George has received praise from MG Siegler of TechCrunch and hate mail from numerous iPhone app pirates. This 27 year old developer is the creator of Boxcar, an iPhone application that uses push notifications to send information you want to receive to your phone. He openly admits that his first three apps were swings and misses, but with Boxcar he has undoubtably hit a home run. Garnering praise and multiple appearances on several leading tech blogs, Boxcar has proven that it is a top iPhone application, and, according to Jonathan, it may soon be a top Blackberry, Android, and Windows Phone 7 app.

Q Tell us about yourself and how you got into iPhone development.

I'm from from Wichita, Kansas and I started programming when I was in Middle School which was about 15 years ago. Before developing for the iPhone, most of my work had been in web development. I remember getting the iPhone and thinking to myself: I have to develop for this. So, I started hacking on it and seeing what I could do and, honestly, my first couple of applications were terrible. I went into the app store with the gold rush mentality and they really didn't sell. This was at a time when everybody was making money and it wasn't hard to make money in the app store. But my applications were complete flops. 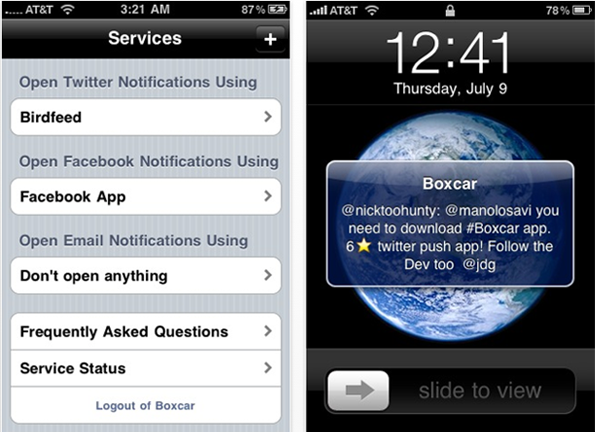 Q How did Boxcar come about?

Like I said, my first apps did horribly. They didn't sell at all and a big part of the problem was that I didn't push them after launch. I put so much energy and effort into development that by the time the apps were done I was burnt out and needed time off. But what you really need to do is double down during your launch. You don't get that time off. After those failures, I took four or five months away from iPhone development and one night I was sitting with my wife watching T.V. I was on my iPhone using twitter and I thought, "you can totally send push notications to the iPhone for @replies from twitter." And my wife thought it would be cool so I said let's build it. Three days later, we submitted it to Apple. After that, we continued to iterate over it and a month later we made our first techcrunch appearance. I went to the iPhone dev camp conference and came back motivated and my wife and I worked on version 2.0 which was launched in November of 2009. And that's when it really took off at that point. It was the biggest launch I've ever had. I mean a huge number of users came on at the same time. Since then, it has been blowing up like a rocket ship. Boxcar was never meant to be long term. It was always meant to be short term and fill a hole. I use to think Boxcar would run its term and in a couple of months something will take its place. About three months ago I decided to make Boxcar long-term. I decided the best way to do that would be to create a provider API that would allow websites to send users notifications when something has happened. An example of that would be if the Mobiletuts+ site could send notifications whenever a new post is posted or whenever somebody replies to a comment. Boxcar is a way to engage those users and bring them back. And the great thing is boxcar will be on more than the iPhone. We actually have an Android version working right now that will be released very soon.

QHow did you market Boxcar?

The real work doesn't start until you've launched. For many coding is the easiest way to procrastinate. They are good at code and comfortable with it. You can have the greatest product in the world and, if nobody knows about it, who is going to use it? I've never submitted Box Car or any of my apps to an application review site. The reasoning and thinking behind that is I would rather go to where my content vertical is and to where my users would be. Example: if I have an application for wine, I'm going to go to Gary V and try to get featured on Wine Library T.V.

Q How did you decide the price of Boxcar?

At first, our app was $2.99. I always told myself I would never compete on price because that's a losing game. The reason I went free was more on growth. My competitors price theirs at $0.99. I will never change my price because of somebody else. I think that's a waste of time. We now are free to download and our users can get added functionality with in-app purchases. For us, this is a great business model because users can pay for the parts of the app they want.

QAt the original $2.99 price point, did you have a problem with piracy?

I did, and it was huge. It was a gigantic problem for me because I have servers and monthly costs. So each pirate actually costs me money where, technically speaking, if you launch an app that doesn't use servers it's not costing you anything except for lost sales. For the second version, I actually did some piracy checks that reported it back to the server and I could turn them off. When I did find a pirate I would give them 24 hours of the server and than send them a message that would show up on their screen. It said: "Thank You for Pirating Boxcar. If you like it please download it in the app store." And some people were very upset at that. I got hate mail after hate mail calling me a loser and piece of trash for detecting piracy. 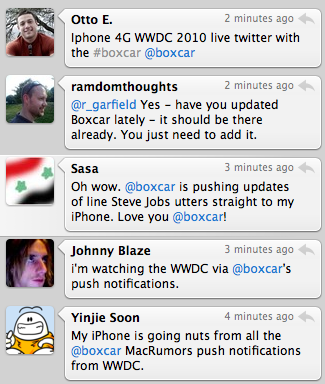 Q Were you surprised about Boxcar's success?

Yes, and I have to give a little credit to my wife. She did the intial design work and helped me get the product out as quickly as possible. If it wasn't for her help, we would have missed a huge window of opportunity. Two competing applications launched 3 days after Boxcar, but because we were first we were able to take advantage of the press and that made it awfully hard to catch up to us. Another surprise thing about boxcar was how the community responded. Boxcar 1.0 was more about instant direct messages on twitter and I happened to throw in mentions as a feature too. Once it launched, I realized that people were using it more for mentions than for direct messages so we iterated and made that feature more prominent. It's a good example of the market telling you what it finds valuable.

Q With so many privacy concerns how do you handle your users data?

We do collect data and we are extremely sensitive about privacy. And because of that, we refuse to use any service that forces us to have to save somebody's username and password. We use oAuth for Twitter, we use Facebook Connect, and we have you forward everything from your email because we care about our user's privacy.

Q How does iOS4 and background processes affect Boxcar?

I'm very excited and relieved about iOS4. We dodged a bullet with iOS4. Apple said they believe updating timelines and receiving notifications should not run in the background. Scott Forstall said, and I quote, "We believe a lot of things like Twitter work better with Push Notification where you get what's relevant for you." With them backing that, it makes Boxcar more important than ever.

Q How important is design to the success of an iPhone application?

I would be remiss if I said design was the most important part of development. The first version of Boxcar worked really well and that was good enough for our users, but a couple of weeks into our launch design became very important. People started complaining about our icon, some of the buttons, and our startup screen. So we had a new design created and implemented. Once the design went live, the complaints stopped and our downloads increased. So, their is a direct correlation between the design of an application and the number of downloads it gets.

Q Where do you see the iPhone Platform in 6 months? A year?

I think location will become huge. In part because it's going to be easier with the ability for Location Based Services to run in the background. The problem with location-based services like FourSquare is that you have to remember to check-in. Eventually, you won't have to remember to check-in because the app can remind you. Given that, I think we will see an explosion in location apps. Entertainment and games will always be popular. The iPhone is made with those apps in mind. I also think I we'll see the number of users continue to increase at a fast rate.

Q As an iPhone developer, what are your thoughts on the Android platform?

Q What advice do you have for new developers?

Find open-source projects to work on. In fact, spend a lot of time rebuilding the code and creating something that is your own from open source projects. Just be sure to honor the licensing agreements. Also, build something that is bigger than the platform. With Boxcar I want it to be that universal, to where it runs on every device that has an operating system. In fact, once we look over the Kindle SDK, we may build Boxcar for the Kindle.

Do you want to be interviewed for a Mobiletuts+ Developer Post?

Are you a developer with an interesting mobile application or company? An interview with Mobiletuts+ is a great way to get information out on your company and apps while providing valuable knowledge to our community. If you are a developer interested in being interviewed by Mobiletuts+, contact us online or via twitter (@mobtuts).

William Herring
William Herring (twitter.com/williamherring) has been involved in mobile apps since 2008. In the past he's worked with developers to create and market utility, entertainment, and social apps. Currently, William is involved in two startups (one in mobile) and during his free time he lends his talents as a freelance marketing consultant.
Weekly email summary
Subscribe below and we’ll send you a weekly email summary of all new Code tutorials. Never miss out on learning about the next big thing.
Advertisement
Translations