Gavin Bowman is an experienced programmer from England who now resides in the United States. He is the co-founder of game development company Retro Dreamer. Gavin and his partner Craig Sharpe are the creators of the iPhone game Sneezies, a popular chain reaction game that is both fun an addicting.

Q Tell us a little bit about yourself, and how you got into iPhone development.

I’ve been an independent developer for the last 11 years. I started off doing some business software, and some freelance stuff at times. About 2 years before the iPhone SDK came out I was doing mobile development as a Java developer for Blackberry. I was creating games and software, and that was where I was making my living. Then the app store started making all of those big waves, so jumping on the iPhone was kind of an easy decision really. It was one of those things where it’s in the same space, it’s the same kind of products, just different languages, and a different class of device. So we just jumped on it, and gave it a try.

QWhat initially attracted you to the platform?

I think from the outside, the distribution model. The fact that you can build your game, you can hand it to Apple, they put it on their store, they do all the sales, well, not the sales [laughs], but they process everything and each month they send you the check. You don’t have to go out dealing with carriers and middle men, you just have one place to sell your game, and coming from any other kind of mobile development that was huge. Coming from a different revenue share as well, 30% is great compared to where we were. So that was very attractive, and obviously the device itself is very nice.

Q What are some of the apps you’ve created and how have you marketed those applications ?

Well one of our main games is Sneezies, which is a kind of a casual chain reaction game. It’s aimed at any casual gamer really, but the app is bright and colorful so it appeals to kids too, and it’s done pretty well. We did all the usual marketing post launch. We looked for particular review sites and banner space back when Sneezies first launched. We also work with a publisher. They take on some of the marketing side of things as well. Aside from that it’s cross promotion, any kind of grassroots marketing like contests, forums, blog postings, and twitter. It all helps in some way. I don’t think there’s any one kind of easy route with an iPhone game. 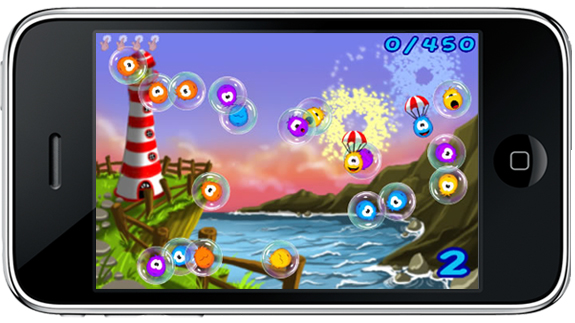 Q When you first started learning development for the iPhone what were some of the obstacles you had to overcome?

Q What does it take to make a great game?

A good way to start is to study and play classic games as well as the popular games on the platform. Figure out what you love about the games and use that to create a new experience for the user that is somewhat familiar. Two Big points: trying something that is completely new that no one has ever seen before is harder and more expensive, and the other point is that the mass market doesn't always want that. There needs to be something familiar and accessible for them to identify with the game. If you take everything out so there is nothing relatable they often won’t get it and won’t want it. There is always a group of hardcore gamers that would like to try something new, but taking that risk can be difficult for a small team in a high volume/low price market like the App Store.

Q How do you choose your pricing?

We’ve done a few different things. We’ve even tried free stuff, but while that hasn’t really worked out for us I do think that free with ads can work. We went with $0.99 cents when we launched because of the pressure from the market to be selling at $0.99 cents. I don’t think we will launch anything else at $0.99 cents. It doesn’t give you anywhere to go, you have no options and it doesn’t make a huge difference to your sales until you make it into the top of the charts. If you’re out of view in the app store, people will [still] find your app. The higher return the higher price points have can make up for any lost sales, and it gives you the ability to mark the app down as a marketing strategy. My advice to app developers is to look at how the bigger companies price their apps. You will see that they start high and then have price promotions. There are sites all over the web dedicated to letting people know when apps change their price. They do this for free and without you knowing. It’s basically free marketing. When you start at $0.99 cents that becomes one of the marketing tools you can’t take advantage of. For most developers who create quality work, a sensible price point is the $1.99 and $2.99 price points

Q Have you had any problems with app piracy?

We have app piracy, but I don’t know how much money it is costing us. I suspect it’s not costing us a great deal. I suspect the people who are downloading pirated copies aren’t playing them very much and wouldn’t have paid anyway, so it’s not something I really worry about too much. I mean, if you really have to have this app but you won’t pay $0.99 cents for it, that pretty much sucks. I don’t see it as a huge barrier to the industry. Most iPhone customers aren’t using jailbroken iPhones to download apps illegally. Also, our app doesn’t communicate with a server which means that we don’t have the negative impact on bandwidth cost that is often associated with piracy. I do believe that if there is a strong server element you have to do what you can to stop the pirated copy. If a user has pirated your app and they are accessing your server content and circumventing your advertising or if they access the server content without paying for the app they are costing you money on an ongoing basis. When you have a 100% client app it’s more of a kind of, ok, it sucks, and I wish people wouldn’t do it because they could help us pay our bills next year by paying $0.99 cents in the app store, but I don't lose too much sleep trying to fight it.

Q What resources do you recommend for new developers?

I highly recommend Apple's developer site and developer forums. You can find out pretty much everything you need to know there.

Q Do you use any 3rd party code libraries or open source projects in your applications?

We use OpenFeint for high scores and achievements. The guys at OpenFeint have created a great product. Most developers I know use them. I believe they are one of the best things to happen to the platform. As a game developer, it is great to just plug that into your game because you just get so much extra functionality.

Q What are your thoughts on the iPad?

We put Sneezies HD on the iPad for the launch and we feel great about it. The iPad is a great device and we hope it is successful, but for now it's hard to tell if it's going to be just as successful as the iPhone. Craig and I are looking forward to doing more work on it.

Q Gavin, thank you for your time and have a good day!

Thanks for interviewing me. I look forward to seeing more great content on Mobiletuts+

Do you want to be interviewed for a Mobiletuts+ Developer Post?

Are you a developer with an interesting mobile application or company? An interview with Mobiletuts+ is a great way to get information out on your company and apps while providing valuable knowledge to our community. If you are a developer interested in being interviewed by Mobiletuts+, contact us online or via twitter (@mobtuts).

William Herring
William Herring (twitter.com/williamherring) has been involved in mobile apps since 2008. In the past he's worked with developers to create and market utility, entertainment, and social apps. Currently, William is involved in two startups (one in mobile) and during his free time he lends his talents as a freelance marketing consultant.
Weekly email summary