Yes, the ‘F’ in FOTB stands for Flash, but Flash on the Beach is so much more than a conference solely about the Flash Platform - or even one aimed specifically at Flash Developers. It is a rollercoaster of inspiration, education and downright good fun. Here are a few of my highlights from the latest and greatest FOTB. I’d love to write about everything I went to and experienced but it would take days; come next year and you’ll see what I mean...

This was my fourth consecutive year making the tweet-filled train journey to sunny Brighton for FOTB and John Davey (organiser) sure knows how to throw an awesome conference that brings you back year after year. The lineup over the three days was crammed with award-winning designers, developers, and people that just make you go WOW. With three separate theatres hosting three awesome speakers at a time it really is a headache deciding which session to attend, but there is no doubt that whichever way you go, something will make your eyes widen, your jaw drop and your brain question reality.

I’m a huge fan of Carlos and his work and this is the third time I’ve seen him speak at FOTB and he didn’t disappoint. Following the Adobe keynote he spoke of two projects, the first of which was an iPod/iPhone/iPad application named ‘HelloFlower’ built using Unity3D.

HelloFlower is available free on the App Store and I seriously recommend you download and have a play since it’s a gorgeous app where you can design your own flower by manipulating the petal outlines and colours. You can then share your result in their online gallery or on Facebook etc.

He then went on to mesmerize the entire theatre with a yet-to-be-released interactive experience titled ‘Lights’ for the UK singer/songwriter Ellie Goulding, built using WebGL. I am a huge fan of music visualization and this was simply awesome, particularly since it was built without the aid of a plugin. I can’t wait to see it again when released and would put money on an FWA heading their way. Keep your eyes peeled for this one! 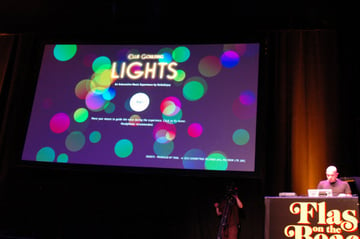 To summarise the session, session sketch extraordinaire James Whiteley posted this on Twitter shortly afterwards and he hit the nail on the head:

For me this was an amazing session getting a glimpse at how Bradley directed and was involved within the visual effects for last year’s blockbuster film, TRON: Legacy. 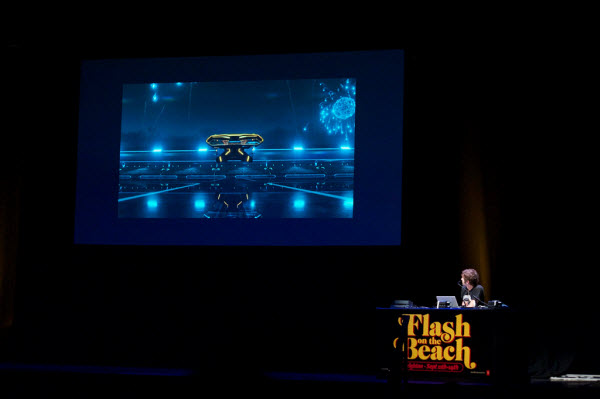 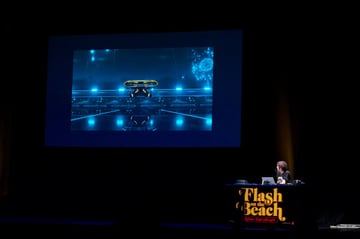 He gave a great insight into how his ultra-cool team was constructed and how important it is to have such a thorough and detailed resource library at your disposal for any project you undertake. It’s incredible to see the original raw shot footage and then the final cut giving an idea of the blood, sweat and tears that goes into post production for those several seconds of film. You can see the final clips here.

Bradley also produced the titles for this years FOTB which he also briefly went into the making off. Have a watch below and then checkout the credits list – he called in a life’s worth of favours to make this and when it came on before the keynote we were all rather blown away.

Seb Lee-Delisle - Pixels for the People

This is the fifth time I’ve seen Seb speak and he always puts on an awesome show that’s full of interaction with the audience and this session was no exception. Using the audience's phones, Seb pushed waves of colour across the room simply by having us all connect to a webpage within the browser. We then played Nyan Cat and the guy sat next to me won with a ridiculously fast reflex time! This was a really cool demo of what I’m sure will be an awesome installation somewhere in the future!

You can read more about the process here on Seb's blog. Long live Seb!

Cyriak – Destroying My Laptop With AfterEffects

I remember seeing Cyriak a few years ago at FOTB and found his work highly entertaining as well as technically very impressive. A piece I found particularly fascinating was a music video constructed with only a few seconds' footage of a street somewhere in the US.

After demoing several other rather entertaining animations - some more serious than others - he started working on a piece live in front of us, sharing an insight into how his workflow and wild imagination piece together these crazy concoctions. Awesome.

I love this guy. Having seen him make a music visualizer hooked up to a modified BBQ a couple of years ago I knew we’d be in for a treat this time around. Pushing visualisation into the physical domain there was fire, smoke and moustache history from the man cave. Such an entertainer! 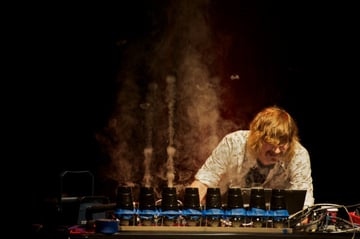 I’m already buzzing about next year’s event which looks to be titled slightly differently to reflect the fact that the conference is not all about Flash; however, I’m sure John won’t let us down, whatever happens.

Hope to see you there.