An Interview With Jonathan Snook

With a wife and kids, Jonathan says, the work day must end precisely at 5:00. Yet somewhow, he still manages to be an accomplished web developer, writer, blogger, freelancer - you name it! One wonders if Jonathan uses a special clock that the rest of us aren't privy to.

"An internationally-admired web designer and developer based in Ottawa, Canada, Jonathan Snook is a gifted creator of striking designs, impeccable markup and code, and forward-thinking ideas and applications that invariably win the respect of the top people in the industry."

What part of the world do you reside in?

I live on the outskirts of Canada's national capital: Ottawa.

I've managed to stay married for over 10 years now and have two energetic little boys.

How long have you been a web developer/designer?

As a hobbyist, I've been doing sites on the web since 1995 but only got into doing it professionally in 1999. 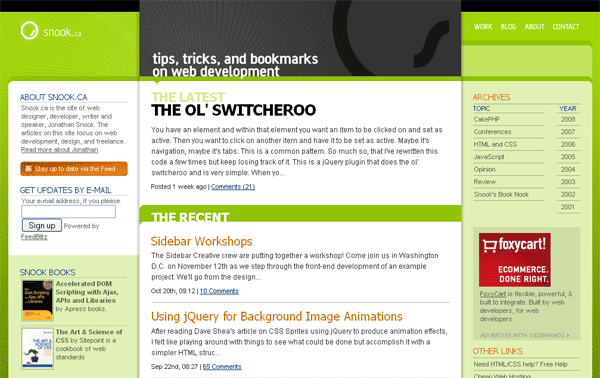 JavaScript. It's a very versatile language that has found its way into browsers, servers, and desktop applications.

Framework of choice, if any?

I couldn't narrow it down to one. Every framework has pros and cons and it's important to weigh those before any project.

I don't play favorites. I switch often, trying to get the right mix of features and certain applications work better for certain type of work. I currently have Zend Studio, Dreamweaver and UltraEdit in my suite of tools.

Favorite Javascript library, if any?

Nope, no favorites here, either. I've used jQuery, Prototype, Mootools, YUI, and ExtJS and there are things that I like (and don't like) about all of them. (And yes, I've used each of those on client projects!)

App that is constantly running on your computer? Photoshop, IDE, etc?

UltraEdit is always open. It's so lightweight, I'm using it constantly. 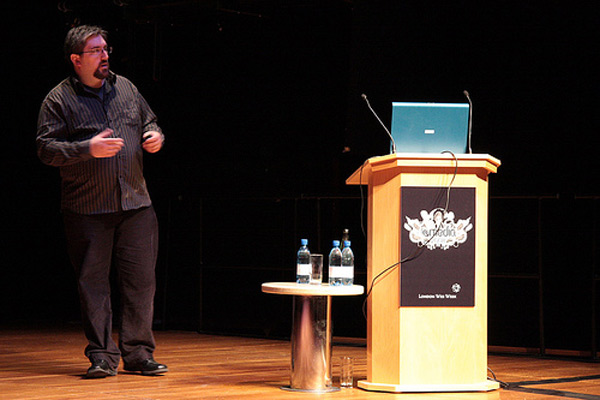 From 9 to 5, I'm at my desk plugging away on something. Having family enforces a strict schedule when it comes to work, which is probably a good thing. What I do between 9 and 5 varies greatly but blends between design, front-end dev, back-end dev, Twitter, email and so on. Getting to decide what and how I spend my day is one of the reasons I went freelance.

Was it a difficult decision to choose the freelance life over working with a design firm?

Surprisingly, not that difficult. The biggest hurdle was convincing my wife that it was worth trying. In the end, it was knowing that going back to full-time work was always possible. Since I've never had any issue landing a job, I've always had that safety net.

What would you recommend to developers who are on the "freelance border", so to speak? Obviously, things like insurance become a much bigger issue when working on your own.

You need to be disciplined. You need to charge enough — and value yourself enough not to feel guilty about charging more per hour than you did working full-time for "the man". You need to be dedicated. It's easy to give up (and I have come close to it a couple times) but the freedoms made possible by freelance have made it worthwhile in the end.

My biggest pet peeve is getting stuck on a problem for half a day. I'll try a dozen ways to get something to work only to realize I was missing one little thing. Luckily, that doesn't happen too often!

Is there a new one in the works that you can speak of?

I was on board to write another book but dropped out because I didn't have time. There's always an opportunity to write another one but I'll really need to be sure I'm ready for the time commitment. I've never had an easy time when it comes to writing a book. It just doesn't flow out of me.

Do you find it hard to stay up to date on the latest development trends having a wife and two children?

Staying up to date hasn't been that hard. Things may seem like they move fast but you don't need to be on the bleeding edge to put together a great web site. With that said, between RSS feeds, Delicious, Twitter, and conferences, I manage to stay in tune with what's going on.

CSS 3 feature that you're most excited about?

It's tough to narrow it down to just one feature but border-radius is probably a common one that I'm continually working around. I keep hoping that Microsoft will throw it into IE8 at the last minute but that doesn't look likely. Multiple backgrounds would be decent, too, as I could pull off rounded corners with only a single element. I look forward to the day when you can build an HTML page with little regard for the CSS hooks required to style it.

To date, which language has given you the most difficulty?

Any language presents some difficulty when I first jump into it because I have to wrap my head around its idioms. I feel like I'm swimming through mud until things conceptually click into place. Java was probably the hardest, though, trying to figure out how all the pieces fit together.

Are there any pet projects that you're working on in your free time?

Currently, I'm trying to revamp Snitter, my Twitter client, along with finishing off Haylia, a blogging tool for the adoption community. I have a dozen projects I seem to be thinking about at any given time. I'd love to build them all but I always manage to put personal projects on the back burner while I focus on client work. Maybe next year will be the year I crank them out.

Of course! Be sure to check out Sidebar Workshops. Our first is coming up (soon!) on Nov 12 in D.C. with plans in the works for San Diego and Austin in the new year.

Thanks for the interview. It's been a pleasure.