Alternative Use of Google App Engine for Optimizing WordPress

I was looking for a solution to optimize my site, in a very cheap way. Often a Content Delivery Network is a good solution but not cheap, so I used Google App Engine as a CDN with Ubuntu.

Step 0: A Little Bit of Theory

Things like stylesheets, images and videos are often the major hit taken by a webserver when a webpage is loaded. It's been proven that loading these assets from different domains helps the browser with multi-tasking, because it doesn't have to wait until Asset 1 on the domain example.com is loaded to start downloading Asset 2 on the same domain. There are a number of approaches to this, and in this tutorial we'll analyze three of them.

Most people simply create sub-domains such as "images.domain.com", "styles.domain.com" and so on. The assets are then called from the sub-domains, so the browser 'thinks' it's coming from a different location, when in reality, they normally always target the same structure.

This approach is useful, and there's a noticeable difference in loading times. A downside to it is that you're still hitting your webserver, and now even harder, as you're making multiple connections at once to it. If you are loading images or small files, that's OK, but things will start to get uglier if you try to load videos or heavier files; and also, especially for cheap hosting, it's not always possible to create sub-domains.

The concept is really pretty, but it also means you'll now have to maintain two webservers. The second one (lighttpd) should really be a one off, as once it's configured, it will just serve static content. Still, it's two webservers on your server, and if anything goes wrong, it's a bit difficult to troubleshoot.

Basically it consists of hosting your assets somewhere else, where you won't have to maintain or keep an eye on performance, as this server's primary task is to serve static content. This heaven is called "Cloud Computing" and it's a "buzz word" at the moment. Basically it consists of a network of servers in strategic places. We call it strategic places, as the servers are located near you. Well, not near you, but from your IP, it redirects you to the closest server, from where you're going to be picking up the assets as they are needed.

It works pretty much as a load balancer, but based on location, instead of number of connections. It makes sure that the bits travel the shortest distance in order to get to you. In other words, if you're in Italy (like me), why should you have to wait for the data to travel from the USA, if there's a server just next door to you. There are some companies offering CDN for a very reasonable price, but today we're going to be talking about free stuff!

Before I start with this tutorial, I have to make it clear that the form of CDN we're going to be using here, is not truly CDN, as it doesn't offer a very high scalability, and hasn't been developed for the sole purpose of serving static files. This means it won't have the same high performance of a service designated specifically for this task. For some (like myself), it won't make such a huge difference, as this method is still better than nothing, and is immensely faster than many servers around. Also for most people who use Hosting Companies and have limited bandwidth, this will be a huge improvement.

Step 1: Google Is Your Friend

Create a Google Account. If you have a Gmail account that will do. I won't explain it in detail, but visit here to create one. Sign up for a Google App Engine Application. And now...

Simply login to your newly created App Engine Account and click the button Create an Application, I named mine "mynewcdn". I use Python with Ubuntu (but some steps are the same for Windows users) so: 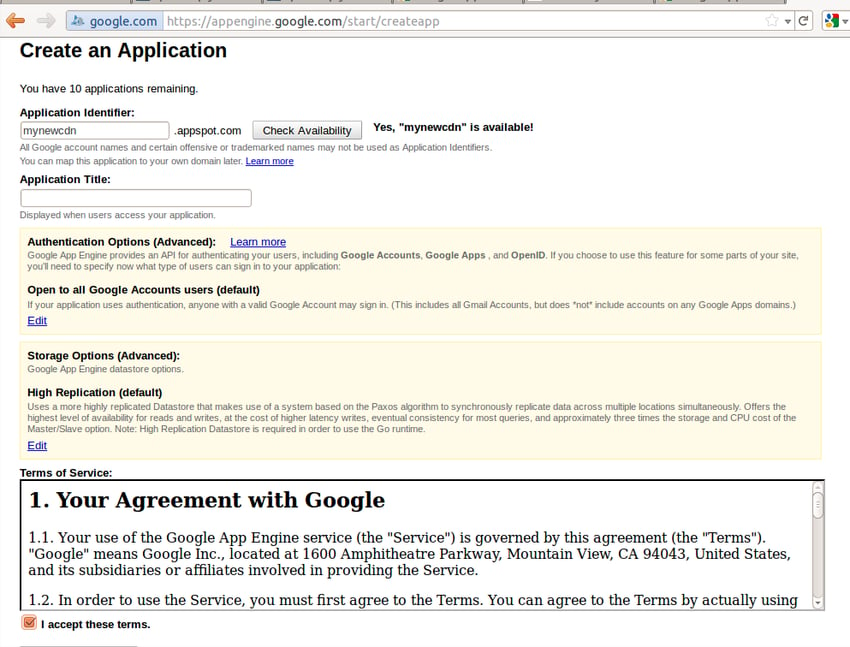 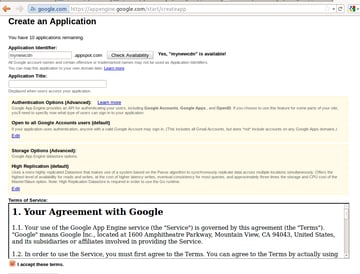 Once the upload has finished, your CDN is ready at the address nameofapp.appspot.com, mine for example is http://mynewcdn.appspot.com/fdicarlo. To verify the CDN is working correctly try to view some pictures and/or files from the CDN.

When you have created the instance on the Google app engine, and have the URL of the app, the only thing left to do is to add it to the settings in WP Super Cache and test how the page works. If somewhere in those steps you have a feeling that nothing is happening, then try to clear your cached pages from enabled cache, in the other tab called "Contents" and save the settings. I used WP Super Cache because it's useful (and powerful) also for the cache but you can use other plugins like CDN linker and the steps are similar. 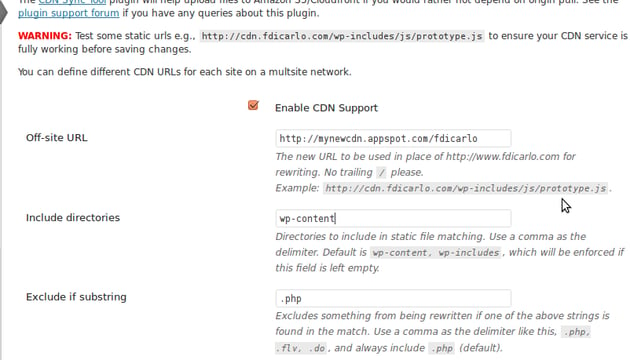 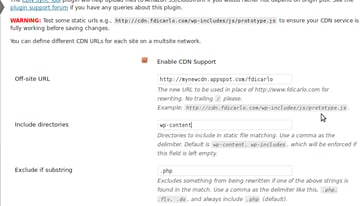 In the field "Off-site URL" I insert http://mynewcdn.appspot.com/fdicarlo. Of course, you should to replace mynewcdn and fdicarlo with your name.

In the field "Include dirs" I put wp-content.

And in the last field "Exclude if substring" I suggest you to insert "php" to exclude php files. Set your parameters how you like, save and now you have configured your CDN. Now when you add pictures or other data in WordPress you should also copy to the local folder and update all with:

I hope that has helped someone to create and start using Google CDN. Using a CDN is just one aspect of SEO and a slow performance is often caused by many factors. If you use a CDN, minifying and caching you can have good improvements to your blog so there's really no reason not to try them.

Fabrizio Di Carlo
I'm a (wannabe) blogger on fdicarlo.com, I am student of Engineering, thinker, wannabe startupper and geek. Founder of Progettiamo.eu, Co-Founder of Startuppi, Co-Founder of 14th Hall and SEO/Social Media consultant. You can find me on: Twitter @fdicarlo and Facebook fdicarlo
fdicarlo
Weekly email summary