MAX is Adobe's annual conference, where they announce their new products and acquisitions, and give us all an idea of their current strategy. Last year they announced Flash's 3D API, codenamed Molehill (now called Stage3D); AIR for TV; Edge, their new HTML5 animation tool; and more. There were also puppets. This year, long-time Activetuts+ writer Franci Zidar is at the event and will be filling us in on the details and sharing lots of photos. The first day's keynote was all about the Creative side of things. Read on to find out more...

This year Adobe is shifting its focus to mobile and cloud solutions. The first and the main Adobe keynote address was absent of any mention of Flash and very little if anything was mentioned about its other desktop web authoring software solutions. In fact, yesterday's main focus was on Adobe's new Creative Cloud and its new mobile touch applications.

The big news was that Adobe had just acquired TypeKit and PhoneGap and integrated TypeKit into its online service as a part of the Creative Cloud. This will allow its users to license any font from TypeKit library and use it in their projects by embedding the font from their server; to do this, you'll pay an annual fee instead of having to buy each font for your project. Adobe applications will also be a part of the Creative Cloud service and you will be able to download and use the applications by buying the annual subscription early next year, which is supposed to be “very reasonable”. The applications will be updated directly in the cloud, so you'll no longer have to wait for (and buy) the full release to receive any bigger updates, as the software will be directly updated through the cloud. 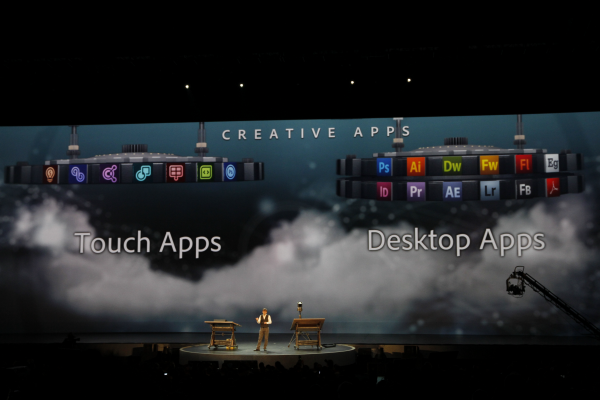 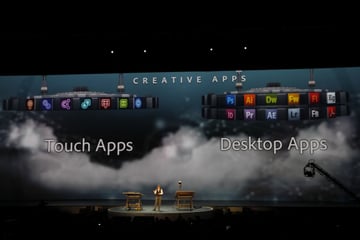 Adobe is now focusing on cloud solutions where all your work and applications can be gathered in one place. The creative community part of the cloud services will offer some interesting features, like sharing your work, including working files which can be previewed, with extracted Kuler color palettes, displayed and hidden layers in Photoshop files, identified fonts from InDesign files and so on. We'll have to wait and see but the cloud services do seem promising. 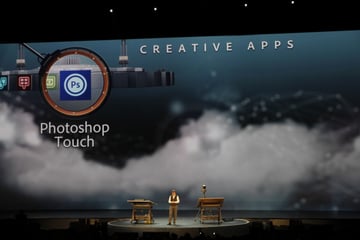 Mobile touch applications were another focus of yesterday's keynote. New applications presented were Photoshop Touch, Proto, Debut, Collage, Carousel and Kuler, all for tablet or mobile. You can check their features at Adobe mobile apps site. Proto was the only one I felt could be actually useful; it's an application for prototyping websites, with a range of supported gestures. I could easily see myself sitting with a client prototyping the website on the fly on my tablet device. Using Photoshop, Kuler or any other design tool on the tablet... not so much, although the news that Adobe is collaborating with Samsung on creating pressure-sensitive stylus capable tablets is also quite interesting.

There was a general sense after the keynote address that Adobe is not willing to commit to Flash as its platform of choice and is avoiding the issue while turning to alternative solutions for mobile deployment through PhoneGap and its other digital publishing solutions.

The Community Lounge at MAX

Flash and Molehill are going to be a part of today's keynote, but is it too little too late. Molehill, with its Stage3D API that takes advantage of the GPU, could allow better 3D graphics inside the browser without installing another plugin (like Unity), but it won't solve Flash's performance problems on mobile devices. Flash is going to have a hard time staying in the game without a bigger commitment from Adobe; it could become a niche platform for gaming if the tools to create immersive experiences in CSS3, JavaScript and HTML like Adobe Edge continue to become more accessible, and Flash's performance and accessibility issues for mobile and low CPU devices are not solved.

Come back tomorrow to find out what's announced in this keynote, or tune in to it live at 10am PDT on the MAX website.