There is a small number of arcade style platformers that I find truly enjoyable, and Survival Lab is among those few. It includes the greatness that is platforming, the addictiveness of RPGs, and even the prospect of awesome boss battles. It may have its flaws, but Survival Lab is one brilliantly put together game.

The gameplay is simple: you're put into an arena (single screen size), and you must survive. You need to dodge bullets, homing missiles, buzz saws, lasers, etc. These objects are all introduced as you survive longer, as things get more hectic. You collect coins that spawn randomly to gain experience points and level up, and these points can be spent on purchasing upgrades such as the ability to double jump, or greater defense. 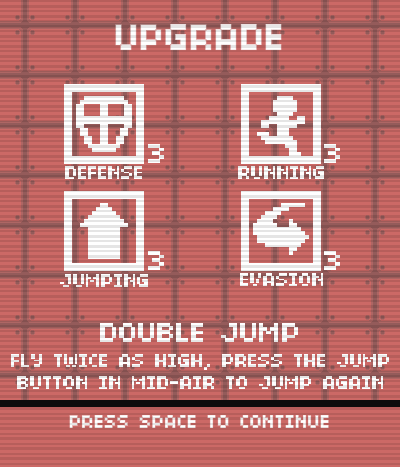 What Survival Lab does right, that most games of this nature would fail at, is to give you decent controls from the start. Generally, when movement is tweaked via upgrades, developers make the mistake of hindering the initial controls, and returning them to normal via upgrades - this is a huge mistake, and often drives players away. If you're going to tweak the core mechanics, you must make them good from the start, and even better after upgrades, rather than horrible to start with, and normal after upgrades.

The greatest strength of Survival Lab, is that it creates a full fledged game out of very little. There's not much to the game, yet it's greatly enjoyable. The game takes place in a single room, with just one boss, yet you have a ton of fun throughout the entire game. It's extremely hard to come up with a mechanic that will work in such a way, but Survival Lab pulls it off. The most profitable Flash games for developers, are games such as this. You have a simple mechanic, easy to program, and you go all the way with it. Your programming is relatively simple, the game is relatively easy to plan, and the art assets are extremely minimal - which is a major cost saver. With far less work than the average Flash game, Survival Lab accomplishes more than most. 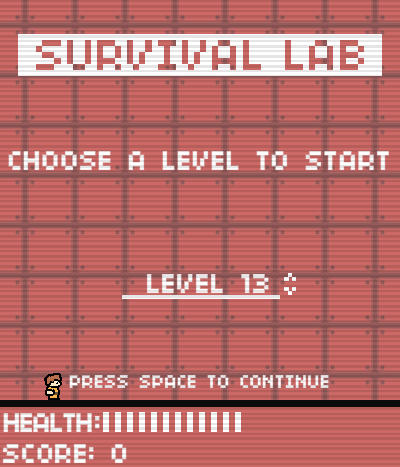 While the game may seem too simple to be successful, it's exactly this that makes it so popular. The RPG level-up elements keep players addicted, and the simple yet enjoyable gameplay lets virtually anyone enjoy playing. The spaced check-points give the player reward feedback at a decent pace, and are constantly giving the player a noticeable sense of progression. Backgrounds change as levels go on, and this too contributes to the sense of accomplishment.

There's also a neat combo system in place that is achieved by collecting coins without getting hit. This system does have a flaw in that the combo is reset if you miss any coin (even if you get another that spawned before one disappears), while one would think (and visually feel) that the combo would remain as long as any coin is collected. Either way, this system is a great addition to the game, and helps keep players busy. Rewarding the player is an absolute must for casual web games, and Survival Lab hits almost all the sweet spots.

What Survival Lab lacks is variety. The game is extremely short, and some places stay rather bland, which causes certain mechanics to be abused, or used too often. For instance, the ground terrain of the arena never changes, ever. Since there's only one arena, and that arena is never physically changing, the few mechanics there are end up being used a bit too much. Bottomless pits, fireballs hopping out of lava, and everything in between, would all be greatly welcomed. 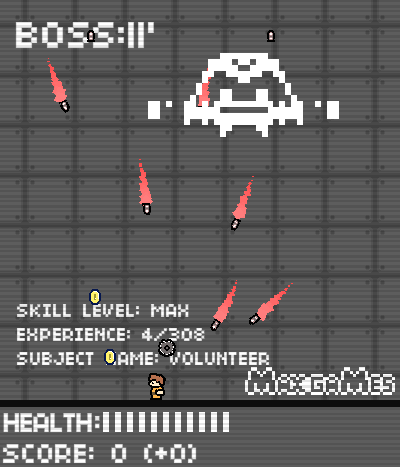 The other biggest flaw of Survival Lab is its lackluster ending. The final boss is an absolute pushover; he's in every possible way too easy. I played the game again before writing this, and was able to beat him within five seconds on my second try (on the first attempt I was low on health from previous levels). This anti-climactic finish really sticks to players, and can actually backfire on a great game to cause low ratings. A player who may have only played half the game, and voted a 5/5, may finish the game, be annoyed at the ending, and vote a much lower score. It's extremely important that you please your players all the way through, or that sudden disappointment may result in slightly irrational low ratings.

The graphics are quite charming in Survival Lab, and are very well done. There's not much to them, but what there is, is consistent in style, and pleases the eye. The backgrounds have a bit of polish, as they change color as you progress levels, which is a very nice touch. The player animations are very smooth, and some of them make you feel quite awesome, such as the roll.

The main improvement that could be done, would be to add a bit more contrast between objects and the background. With the background changing color, the red background leaves the homing missiles a bit hard to see, and with the yellow, coins quite hard to see. A bit more attention to this would make the game slightly more enjoyable, but it's a relatively minor flaw.

With the overall simplicity of the game, there really isn't much more to be done with graphics; they truly are done as should be.

The audio in Survival Lab is nothing amazing, but it gets the job done. The main track is a bit compressed, especially since the game itself is very small and has room for a bit more file size.

The sound effects are done quite well, and are very fitting. Everything in the game seems to have a sound in place, which is quite uncommon, despite the fact that it should be seen as an absolute necessity.

Survival Lab is, essentially, the perfect Flash game. It's not the greatest game by any means, but it's exactly what this industry calls for. It's quick fun for the players, and quick cash for the developers. It's simple, easy to create, but quite cost-effective on the developer's part.

As developers, we can make Flash games as large as we want, but that won't mean more money. At the end of the day, we're almost always selling glorified advertisements, and the smaller the game, the more profitable you'll likely be.

While the game itself is great, it feels to me a bit too simple. It's almost as if it ends before it even begins. I personally feel the game would be more enjoyable with multiple arenas, and a boss at the end of each arena. What do you think?

If you've got a browser game that you'd like the Activetuts+ community to do a critique on, submit it here. We're looking forward to seeing what you've made.