Continuing our new series of critiques, this week Matt Porter gives us a detailed rundown of an excellent Flash shoot-'em-up: Frantic 2.

When it comes to quality arcade shooters, specifically bullet hell games, the web doesn't have a whole lot going for it. Luckily, there are a few gems here and there, such as Frantic 2. It doesn't come without its faults, but it does enough right to earn its place as one of the best bullet hell web games.

Frantic 2 is all about fast paced action, huge bosses, and a large number of ways to take down your enemies (which in this universe, seems to include anything that moves). It definitely isn't for the completely casual web gamer, but that's all right, seeing as players like me would die if hardcore games didn't exist for us on the web. The game does offer a variety of difficulty options to compensate for this.

The most notable thing that Frantic 2 does right, is live up to its name. This is good and bad - we'll focus on the positive for now. The game is all about action. This means lots of enemies, tons of bullets, and no time to take your eyes off the screen. The bullet patterns of enemies range from simplistic straight ahead shots to insane patterns that only the magic that is math could create. If you're a fan of action, this is a definite plus, as it keeps you on your toes at all times.

The controls are extremely simple, perfect for the job. The game offers both mouse and keyboard controls, which is impressive as that's hard to achieve for most shooters. To ease things even more, the game auto-fires for you, giving you one less button to worry about. Moving can be done with WASD, the arrow keys, or the mouse, while your special is triggered by the Space bar or left mouse button. There are also keyboard shortcuts for pausing, muting, etc, which is always a plus. While it would be nice to allow the player to stop firing, to better see the extremely hectic play field, it's perhaps a fair trade-off to simplify the controls. Perhaps with the addition of right-click support in Flash Player 11.2, we'll see less of such sacrifice in control schemes.

When it comes to your own arsenal of weapons, you have plenty to choose from, which is one of the strongest design points of Frantic 2. There are three ships available from the start, and two more to be unlocked later in the game. Each handles very differently, and has its own strengths and weaknesses, which allows players to cater to their own personal play style. In addition to ship selection, you can purchase various primary weapons, "wingmen" (ships that fly alongside yours), and abilities, to enhance your ship and chance of survival. All this customization gives you plenty to experiment with, and loads the game with replay value - a must-have for any game that's trying to win sponsors.

As mentioned, Frantic 2 is loaded with bosses - 30 of them, to be exact. Bosses are always welcome, as they're fun, unique from basic enemies, and can really help with immersion. While you can't really hurt the design of a shooter by adding bosses, you can definitely fall short of reaching the potential for added value, and that has unfortunately happened here.

Most of the bosses look way too similar, and aren't very memorable. There are a few unique ones, such as the boss that spells out “Frantic2” with its bullets, but most are rather bland and unmemorable. I played the entire first chapter again just before writing this, and I can't describe any one particular boss I just fought, because they were all very bland, looked almost exactly alike, were covered in bullets, and died way too quickly. Even on “Normal” difficulty, many of these bosses died in as little as 10-15 seconds, without me having any particularly strong upgrades; that's not exactly exciting.

Bosses need character, they need to look different, and they need to act uniquely. They're the main villains in a game, so what good are they if they look just like every other bad guy? Frantic 2 has a bunch of the same looking boss (for the most part), with a ton of hectic yet similar bullet patterns. Less quantity and more quality would have made for better bosses.

The biggest issue the game suffers, is that it's just too... well, frantic. The game is a bullet hell - I get that - but not being able to tell the difference between a powerup, a coin, and bullet, at a glance, is extremely poor design.

There are way too many colors used for both player and enemy bullets, which makes avoiding crazy situations nearly impossible. The game does in fact offer options to change the visual settings to a more simplistic, less eye-melting style in the options menu, but this isn't really a viable solution. As a developer, you should never assume anything of the player, especially when that's related to them either reading text, or visiting an options menu; it just doesn't happen most of the time, especially with web games. 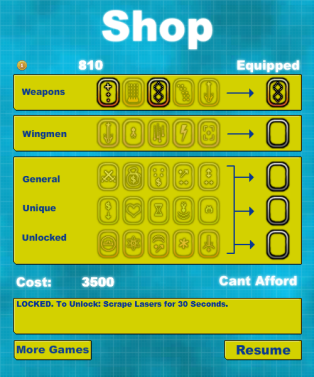 Also related to the issue of assuming things of the player, is a piece of terminology used within Frantic 2. The game uses the term “scraping” which refers to getting close, but not too close, to enemy projectiles. This is explained in the “guide” menu, but a more elegant solution would be to simply color terminology in blue or some other color, and give it a roll-over description. It's not a big deal, but since the word is thrown in front of the player in the upgrade menu, it would make more sense to explain it to them there, without making them dig through the game to find out.

Another large issue with Frantic 2, is a somewhat particularly annoying UI decision. When you first enter the shop, hovering over icons will show you a description, and tell you what is required to unlock that item if applicable. However, once you click on an icon, the hover effect is lost on all other icons. 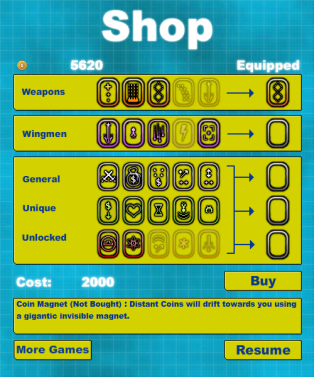 The game locks onto the description of the currently selected item, and clicking just anywhere doesn't lose that focus; you have to actually click on another non-purchasable icon to gain the ability to hover over any icon again. If you click on another purchasable icon, it'll lock onto that one, still crippling you from viewing descriptions on weapons you don't yet have with a simple hover.

No Sense of Progression

My last complaint with Frantic 2 is its extreme lack of giving the player a sense of progression. Due to its graphical design choice, there are no backgrounds, there is no world; you're simply in a white void fighting enemy after enemy. As mentioned, bosses look the same too, so all in all, there's really nothing to make you feel like you're going anywhere.

The game splits levels into three “episodes”, each containing five levels - but it's all the same, nothing really feels different. My solution to this is the same as it was with bosses, less quantity, more quality. I'd rather have some backgrounds and noticeable progression than fight a horde of enemies in a white void.

It's clear that the developers took the easy way out with Frantic 2. There are no backgrounds, most bosses look extremely similar to each other, and what few unique touches there are, look so close to other art assets in the game that they don't stand out as being unique at all. I understand the decision to go simplistic, as having a game this big with unique assets would be extremely expensive (in either time or money), but again, quality over quantity.

That being said, the art that is there is polished, and everything does look good together. The design of the menus and UI is well done, and everything is very easy to navigate. The regular enemies look decent, and are consistent with the simplistic art style . All in all, the art in Frantic 2 gets the job done, it just suffers a bit due to the design choice of going simplistic.

The audio in Frantic 2 is pretty average for a sponsored web game. It's nothing ground-breaking, but it's good enough to pass as complete. I'm not too fond of the rock-based sound track, especially due to its large compression, but players of the game don't seem to mind too much.

The sounds are all done quite well, and are all balanced as far as volume goes. Weapon firing isn't too loud, explosions don't stand out above everything else too much, it's all nicely in harmony.

There are a few sounds missing from the game, such as a pause sound, and upgrade menu select and purchase sounds. While these aren't horribly important, having them absent does subtract from the reward feeling of buying a new weapon, which is a much desired effect.

Overall, Frantic 2 is one of the higher quality bullet hell games on the web. It's not the best, but it's certainly up there. It has many faults, some of which were overlooked by the developer, others which the developer made on purpose in order to keep the project manageable.

Regardless of its faults, it's a great shooter with enough charm to keep you entertained for a decent amount of time. I'd love to see a sequel with some of the main issues I pointed out addressed, but unfortunately I think many of these faults are stuck with the series due to original design choices. Either way, there's much to be enjoyed from Frantic 2, and even more to be learned, so everyone's happy.

What do you think of Frantic 2? Share your constructive criticism in the comments below!

And if you've got a browser app or game that you'd like the Activetuts+ community to do a critique on, submit it here. We're looking forward to seeing what you've built.

CritiqueFlashWorkshops
Did you find this post useful?
Yes No
Would you like to provide feedback (optional)?
Cancel Submit
Want a weekly email summary?
Subscribe below and we’ll send you a weekly email summary of all new Code tutorials. Never miss out on learning about the next big thing.
Sign up

Porter
I'm a game developer, professional game consultant, and avid gamer. I've been playing games since the age of three, and have loved everything about them since before I can remember. To keep up on my current projects, and overall view of the game industry, check out my developer blog, and follow me at @Gemfruit.
Looking for something to help kick start your next project?
Envato Market has a range of items for sale to help get you started.