No huge updates this week, but a few important small ones! Flash Player 10.3 beta 2 and Adobe AIR 2.7 were released, sharing a bunch of new features. PowerFlasher have also released the latest version of their hugely popular Flash code editor, FDT 4.3. Read on for the details... 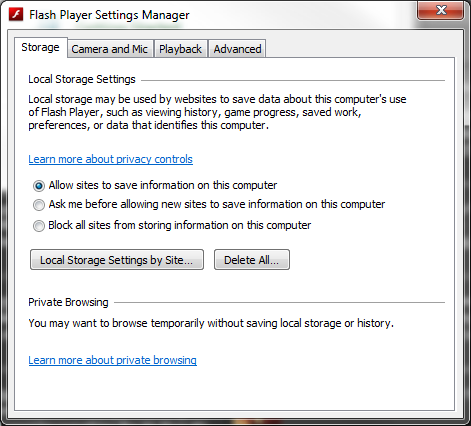 Flash Player 10.3 is a point-release update that actually includes some rather large changes. This will be the first version of Flash Player to include a native settings panel. No longer will users need to visit an ancient-looking web page hosted off of the Macromedia domain to manage their personal settings.This version also includes much tighter integration with web browsers to allow the browser privacy control to manage internal Flash Player local storage objects.

New media measurement features are set to make information for analytics more robust with enhanced NetStreamInfo and NetStream monitoring. It will also be simpler to determine the page domain URL of which the Flash object is currently embedded. Certainly not least is an extension to the Microphone class that provides acoustic echo cancellation, noise suppression, voice activity detection, and automatic compensation for varying microphone input levels. Wow!

Adobe AIR 2.7 includes everything that Flash Player 10.3 does -- aside from the native settings panel and access to the page domain, since these features are not applicable to installed applications. Some AIR-specific features include an enhanced HTMLLoader API which provides more control over how clickable links behave in HTML content displayed within an AIR application, and a streamlined interpreter mode for iOS in ADT to allow more efficient testing and debugging.

Another high profile release this week is PowerFlasher FDT 4.3! The major new feature for this release is project references, which allows a developer to share source code across multiple projects within FDT. This differs from the Flash Builder library project implementation in that you do not need to create a separate project for the shared source code. This feature also allows move and rename refactoring across project. Pretty nice!

Other features in this version of FDT include new class wizard improvements, a browse button for the project templates feature, and addition changes to a variety of interface elements and panels.