7 Crucial Tips for Designing and Maintaining a Large Site

Projects vary in scope and size, and the challenges they entail vary likewise. As a lone web designer, the biggest job I am responsible for is FlashDen. Along with thousands of active members all chatting, uploading and buying, the site processes large amounts of money and large amounts of traffic.

Designing, redesigning, maintaining and working with a developer team has given me some useful insights and tips for making life easier. And since today we've launched my latest redesign of the site, it seems like a good time to write up my top 7 tips!

1. Design and Code for Maintainability

The first and biggest tip I can give is to design the site so that it's easy to maintain. Often, when designing a site, you might sacrifice things for aesthetics. For example, you might use images where text or styles would suffice. Or you might deliberately choose a menu structure that has no room to grow. When the site is large, this becomes a really bad idea.

When I built the very first version of FlashDen almost two years ago, I used images for buttons. They looked really nice, but I wound up with a library of 100 different button images, not to mention rollovers. Then, in the next couple of months, every time a developer needed a new button, they had to ask me to create an image. Needless to say, I learnt that lesson pretty quickly, and we switched to a single button class that maybe doesn't look as good but is much better for peace of mind.

Another aspect of maintainability is thinking about how the site is going to grow and change. For example, as new pages get added, where do they go? Early on, I wanted to have a horizontal navigation, but this is really limited. After some experimenting, we wound up using a vertical nav, allowing for submenu items, and then on top of that, added a tab structure into pages to allow for related pages to be grouped together. I'm not saying it's the best navigation in the world, but it certainly means we're not redesigning every time a new section is added to the site!

So in designing for a large site, look for ways to make life simpler later, because you'll be glad you did!

2. Figure Out Your User Groups and Tasks 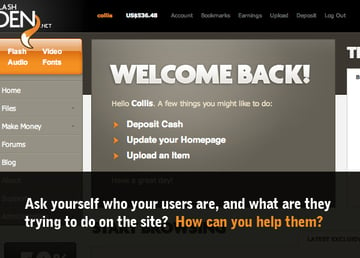 One of the biggest differences between a large site and a small one is the number of different user types who might be using the site. For example, on FlashDen, there are buyers, authors, visitors, admins, and members. Each group has a different set of aims and tasks they have to carry out. Sometimes these tasks overlap, but sometimes they are quite different.

The best example of a place where user tasks are at odds with each other is on a homepage. Nowhere else on a site does every user group converge, and nowhere else is it so vital to make sure everyone gets what they want. And, of course, you have to be careful that in serving one user group you aren't ignoring another.

In this latest redesign of FlashDen, the biggest area that I worked on was the homepage. The first thing I did was list out to myself all the things that each user group needs to do:

When you know what different user groups want to do, then you can design a page that solves all their needs. Needless to say, this is a task that gets exponentially harder the more groups and tasks there are. On other pages in the site, you will often get a subset of user groups to worry about, but on the homepage they all converge. Not coincidentally, the homepage is the most important bit of design work you have to do on a site.

Before you can solve the different needs, though, you need to prioritize the user groups, and in order to do that, you'll need to understand what the site is trying to achieve. 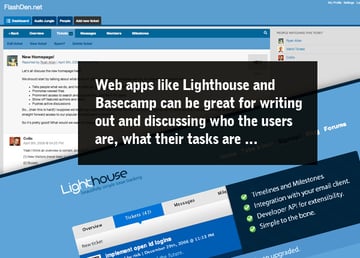 Although every user group naturally feels they are the most important, it is up to you to prioritize them according to what the site itself is trying to achieve. For example, on FlashDen, after sitting down with the team, we drew a few conclusions as follows:

So following from this, it's possible to conclude that the homepage needs to server users in this order: Visitors > Buyers > Authors > Members > Admins.

Understanding what your site is trying to achieve is the final thread that sews your user tasks together and tells you what you should be trying to put on the page. Ideally, on every key page, you should identify the user groups, tasks, and priorities. For a vital page like the homepage, I do this formally on paper, and for lesser pages I will often just do it in my head while designing. 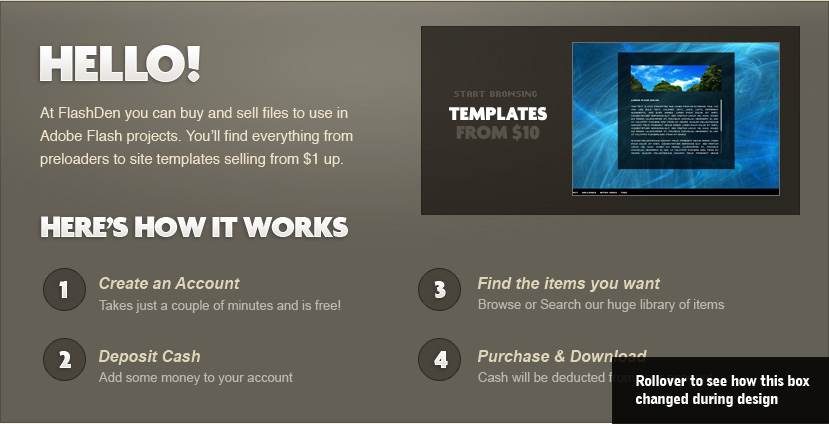 It's only after you've figured out user groups, tasks, site goals, priorities and so on that it's time to design! It is really vital that you do this first because, on a practical level, it dramatically lowers the odds that you are going to have go back and redo your design. Whenever I have just started designing a big site without really analysing first, I have inevitably had to rework lots of screens or even whole interfaces.

Lots of designers like to use wireframes at this point—that is to simply lay out a bunch of lines and boxes indicating roughly where things should go. Personally, I prefer to work in Photoshop from the start because I'm quick enough and it lets me really see what's going to happen. I also think that there is more to information design than where something appears on a page. Simply altering colours and background colours can make a page element further down the page suddenly seem more important.

Once you do have a rough idea of how the information needs to work together, you should come up with a working design that is generally OK, and then refine, refine, refine. I often will wind up with five or six versions of the same look, where I've tried varying different things like type sizes, images, layout alterations, backgrounds, and so on, to see how it affects the information you're presenting.

No matter how good you think the first layout is, I can guarantee that after spending more time and coming up with more versions, you'll have discovered that your original wasn't quite as good as you first thought. Sometimes you wind up throwing out the whole design and starting again, but if you do have a good base, then refining should get you to a great finish.

5. Get Others' Opinions, But Make the Final Calls

In any large job, you are going to have a lot of other opinions involved. In most cases these will be the opinions of your client. Prior to starting FlashDen, I used to work with all sorts of companies building websites. Among them, I did have the misfortune to design for several large insurance companies and a few governmental organisations. I say misfortune because when you get to that size of client you are dealing with a lot of stakeholders, and in many situations it isn't clear where the real power to make decisions lies. This can result in endless meetings, endless changes, and a high degree of difficulty for carrying through your vision.

Whatever the client, it's really important to get their opinions. Aside from anything else, in most cases they know a lot more about the business than you do. Hopefully, they also know more about the users than you do, and with this knowledge they will be able to give constructive advice.

It's also important to get the opinion of the development team you are working with. At FlashDen, we're fortunate to have two devs who have a lot of skill in user interface design and usability. And their input, along with the rest of the team, made a lot of difference to the end product.

But in the end, it's up to you as the expert designer to come up with the final call. If you have a tough client this can be tricky, because a client often believes they should make the final calls. If that is the case, you need to (a) find ways to explain, educate and show the client that your choices are for their benefit; and (b) sometimes bite the bullet and accept the client's directives as a further constraint in your project, and find ways to make it work.

6. Organise for the Future 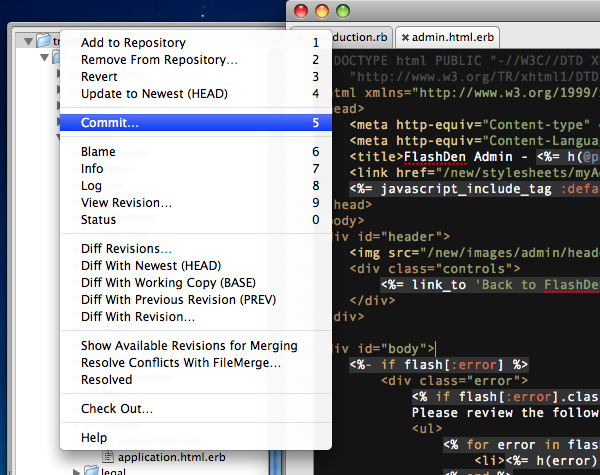 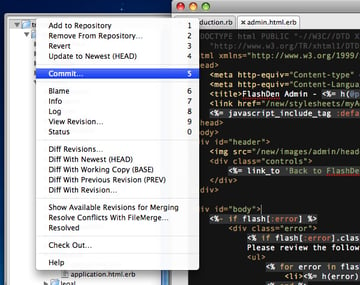 When you are coding up a design for a big site, it's really important to again think about the future. How you manage your files and folders will affect you greatly later. For example, recently we have decided to build a sister site to FlashDen that focuses on audio only, called AudioJungle. To make things simpler, the site is going to run the same HTML, with just stylesheets to make it look like a different site. A development like that throws up all sorts of new challenges to my file and folder structures, my stylesheets, and my HTML. Here are some things to keep in mind:

7. Make It Easy to Develop With Your Stylesheet 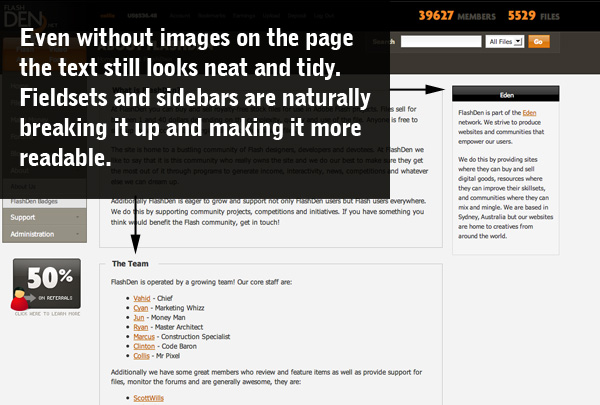 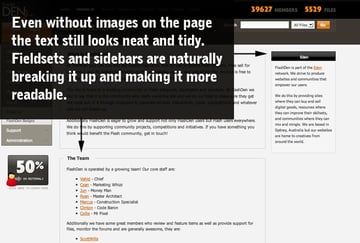 The bigger the site, the less likely a designer will get to see or modify every single page. If you're a single designer on a big site—like me—then you also might not want to be called in for everything. So it pays to make a stylesheet that almost by default makes things look nice. For example:

Naturally, it's optimal if every page does go through a designer, but it's also much less stressful knowing that even if they don't, it'll still look professional and uniform.

So those are my tips. If you have some of your own from working on bigger sites, leave a comment!

GeneralWeb Development
Did you find this post useful?
Yes No
Would you like to provide feedback (optional)?
Cancel Submit
Want a weekly email summary?
Subscribe below and we’ll send you a weekly email summary of all new Code tutorials. Never miss out on learning about the next big thing.
Sign up

Collis Ta'eed
Hi I'm Collis and I work at Envato making awesome websites and generally wandering about the internets!
Looking for something to help kick start your next project?
Envato Market has a range of items for sale to help get you started.