Curious about 3D game development? Now is the time to learn! This five-part tutorial series will demonstrate how to build a simple game with ShiVa3D Suite, a cross-platform 3D game engine and authoring tool. This is the final installment of the series, where you will learn how to setup the game as a project in Eclipse and deploy to the Android platform. Because ShiVA 3D is a cross-platform tool, we will also discuss how to port the game to iOS.

Customizing the Game in Eclipse

In part 4 of this series, we finished the coding for the remaining AIModels, the EggAI, and the MainAI. We also performed unit testing by animating the game. We then exported the game from the ShiVa Editor for importing into the Shiva Authoring Tool. Finally, we discussed two different authoring options in the Shiva Authoring Tool, one for generating an Android executable and another one for generating an Eclipse project. In part 5, we will firstly talk about customizing the game in Eclipse. This will include the Eclipse project setup, code changes, and building the Java code and native libraries. At that point we will have completed the tutorial in terms of development and deployment. In the remainder of part 5 we will review the code, discuss how to port the game to iOS devices, and give some concluding remarks.

In the instructions below, we assume that the output file Duck_Android.zip from Shiva Authoring Tool is located in D:\temp (see the section called 'Authoring For Project' in the previous tutorial). If you had chosen another location, change those instructions accordingly. Also, you must have completed the steps described in part 4 under the section 'Prepare The Android Device For Installation'.

Before importing the project into your Eclipse environment, make sure that the Eclipse ADT plugin points to the correct location of the Android SDK in your local system. To check this, in the Eclipse menu go to Window -> Preferences -> Android. The SDK Location window must be set to the location of the Android SDK. Once set up correctly, you should see something similar to the example below. Import and Build the Project

To import the project from the Eclipse menu, go to File -> Import. Then, in the file import wizard, select General -> Existing Projects into Workspace as shown below. 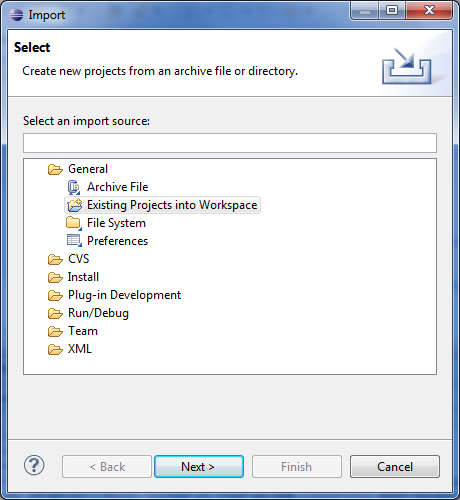 On the next page of the wizard, choose Select archive file: and browse to where Duck_Android.zip is located in your file system. The Projects window will be automatically populated where the Duck project is already selected. This is shown below. Press the Finish button to complete the import. 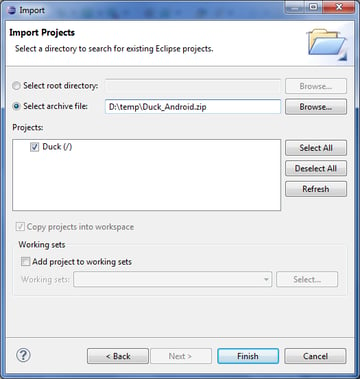 Eclipse will build the application automatically after the import. Now you should see the Duck project in project explorer.

Please note that at this point you may get an error that says: "Android requires compiler compliance level 5.0 or 6.0. Found '1.4' instead. Please use Android Tools > Fix Project Properties." This is a result of having the incorrect version of the Java compiler assigned to your project. To fix the problem, highlight the project in the Project Explorer, and from the right-click menu, select Properties. You will see the properties for Duck. Highlight the Java Compiler and check the box that says Enable project specific settings. Under the Compiler compliance level you should have 1.6 selected as you see below. Click OK. 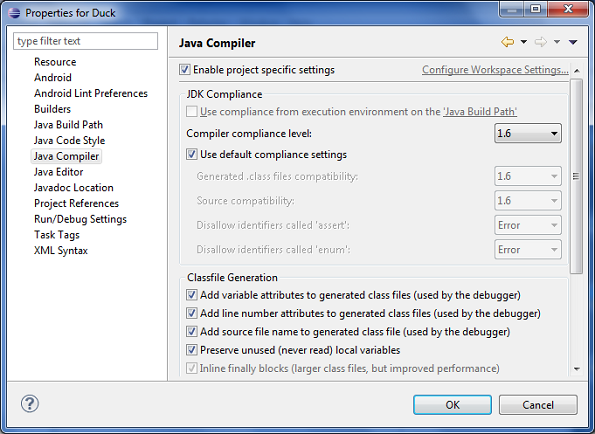 At this point Duck project must successfully compile. If necessary, from the Eclipse menu select 'Project -> Clean...' to force Eclipse to compile the project.

After the initial compilation of the project, we need to build the native libraries. You need to edit Application.mk for the correct build settings. In the Project Explorer, double-click on the Application.mk under jni folder, as shown below, to bring it up in editor.

You need to set the following configuration parameters:

Firstly, <Project_Windows_Path> is the path to your Duck project in Eclipse where backslash (\) is replaced with forward slash (/). In the Eclipse Project Explorer, highlight Duck (the top level root folder for the project) and from the right-click menu select Properties. In the Properties dialog, highlight Resource on the left. In the Location attribute you will see the Windows path to your Duck project. Type it as the value of APP_PROJECT_LIBPATH by replacing the backsplash with the forward slash, i.e. APP_PROJECT_LIBPATH := D:/eclipse/DuckTest/Duck

The final version of Application.mk is shown below. Do not forget to save it.

Now, open up the Cygwin console. Change the directory to the value of APP_PROJECT_PATH, e.g. cd /cygdrive/D/eclipse/DuckTest/Duck.

If you type 'ls' you should see the files and folders right under the project root Duck, like so:

The last several lines of the console output from the build process are shown below.

Now, go back to Eclipse, select the top level project folder Duck and from right-click menu select Refresh. We need to do this because the build was performed outside Eclipse, and therefore Eclipse should be notified of the changes in the project's folders.

Next, we need to copy two files:

Eclipse will build the Duck project automatically after copy/paste.

Finally, we need to copy two more files. One drawback of using the ShiVa Authoring Tool for Android OS is that it limits the launch icon size to 48x48 pixels and the splash screen image to 480x800 pixels. When you customize the project via Eclipse, you can replace the launch icon and splash screen image with files that have a larger pixel size more suitable for a tablet. For this reason, we provided app_icon_72x72.png and app_splash_800x1280.png in set2 of the download archive. Rename those files as app_icon.png and app_splash.png, respectively, and in the Project Explorer, copy them over to Duck -> res -> drawable folder. This overwrites the original app_icon.png and app_splash.png.

Eclipse will build the Duck project automatically after the copy/paste (in the Duck_Android_final.zip file, which is part of the download archive, the Duck -> res -> drawable folder already has the 72x72 pixel sized launch icon and the 800x1280 pixel sized splash image).

We need to edit Duck.java to hook up the system call openURL with the vibrate function in the Android device. In the Project Explorer, double-click on Duck -> src -> com.shiva3d.demo -> Duck.java to bring it up in the editor. Make the following two changes. In the Duck_Android_final.zip file, which is part of the download archive, those changes have already been made.

1.Change the onVibrate function to set the duration to 100 miliseconds:

Save Duck.java and wait until Eclipse completes the compilation and build. Now, the game is ready to be deployed in your device via Eclipse. Connect the device to your PC via the USB cable. In the Project Explorer, select the Duck project and from the right-click menu Debug As -> Android Application, as shown below. This will install the game in your device.

In this section, we will review the Lua code used in the ShiVa Editor and changes in the Java code made via Eclipse.

The first code set we will inspect is the one associated with the MainAI.

Comments: This handler is where various steps are performed to initialize the application.

Comments: This function sets the values of prevTouchCount and prevY0 to 0.

Comments: This function displays an informational text, 'Game Restarting', before the game restarts.

In this game, we are interested in two types of touch events:

Note that those handlers are useful only if device is multitouch enabled and you have enabled multitouch in your application (see onInit above).

Let us first look at onTouchSequenceBegin and onTouchSequenceEnd. As seen from the code listings below, both handlers call the reset function reviewed above to set the values of variables prevTouchCount and prevY0 to 0.

The listing for onTouchSequenceChange is given below.

Let us first explain the parameters in the event handler.

With this information, let us try to understand the code. 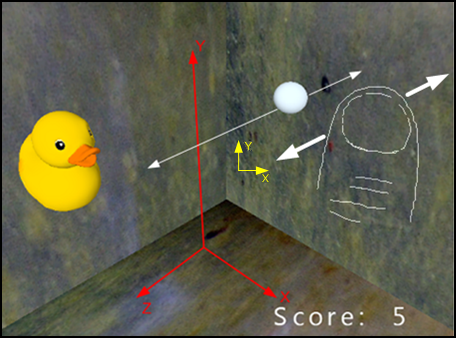 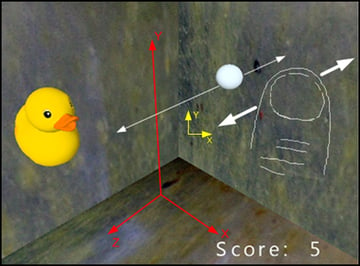 We will now inspect the code for DuckAI.

Comments: This handler is where we initialize variables for the Duck model.

Comments: This handler rotates the duck in both global and local spaces. In the global space, the duck rotates around the y-axis only, on a fixed plane defined by y=3 (initial value for the y coordinate of the duck) in either clockwise or counter-clockwise direction. If the boolean variable isPositive is true (initially the case), the rotation is clockwise and vice versa.

Comments: This handler is executed every time the duck and egg collide. It mainly performs three tasks, increment the score, change rotational direction of the duck and make a system call to vibrate the Android device.

We will now inspect the code for EggAI.

Comments: Here, we set the initial position of the egg in global space via object.setTranslation ( this.getObject ( ), 0, 3, 0, object.kGlobalSpace ). This corresponds to (x=0,y=3,z=0).

Comments: This handler is where the motion of egg is defined. There are two possible movements for the egg:

The code can be interpreted as follows.

Comments:
This is a custom handler where the values of variables jump and isBack are manipulated based on user's touch event.

In this section, we will review the customization made in Duck.java

This is a system call to open a URL in device's browser. The default behavior is to start a new activity based on an intent of type Intent.ACTION_VIEW. We overwrite the default implementation to call onVibrate instead.

Porting the Game into iOS

This tutorial covers 3D game development for Android OS using ShiVa3D Suite. However, with slight changes you could author the game for iOS devices, iPhone/iPod Touch or iPad/iPad2 as well. At a high level, one would need to follow the steps below to port the game into iOS.

A comprehensive study of using ShiVa3D Suite for iOS game development is given in another mobile tuts+ tutorial (https://code.tutsplus.com/tutorials/create-a-3d-flight-simulator-app-for-ios-and-android-premium--mobile-8342). For details, see that reference.

ShiVa Authoring Tool is used to convert a game created via the ShiVa Editor into the target operating system. For Android OS, we discussed two possible authoring options, Project and APK Package. With the Project authoring type, ShiVa Authoring Tool generates an Eclipse project with Java and C/C++ code letting developer further customize the application before it is deployed into target devices. As part of this tutorial, we showed how to vibrate the device via an event handler, overriding the default behavior of the openURL system call. The other authoring type, APK Package, generates an Android apk file which can be readily deployed into the target device. The APK Package is the proper authoring type if you do not need any customization of the game.

For those who are interested in further reading, here are some links to ShiVa3D knowledge base.

Some final comments are as follows.

Game EnginesMobile DevelopmentShiVa 3D
Did you find this post useful?
Yes No
Would you like to provide feedback (optional)?
Cancel Submit
Want a weekly email summary?
Subscribe below and we’ll send you a weekly email summary of all new Code tutorials. Never miss out on learning about the next big thing.
Sign up

Konur Unyelioglu
Konur Unyelioglu is a Systems Architect at Compuware Corporation working on software development and consulting projects. His main focus is internet technologies and mobile web development.
Download Attachment
Looking for something to help kick start your next project?
Envato Market has a range of items for sale to help get you started.