Ruby on Rails is an excellent framework to learn not only because it's a great web application framework, but also because it has a large and helpful community. In fact, chances are you can learn how to use Rails in a multitude of ways, just by searching the web.

We've taken it upon ourselves to compile some excellent tutorials that Rails beginner's and zealots alike can use while working in the popular web app framework and continue exploring the endless possibilities of Rails.

1. How to Install Rails

A getting started guide on how to set up Rails in multiple environments, from the official Ruby on Rails site.

2. Ruby on Rails for Web Development in Mac OS X

Apple has an official guide on how to get started with Rails on a Mac.

3. Installing Ruby on Rails with Lighttpd and MySQL on Fedora Core 4

Extensive documentation on how to get this great cocktail of software working for Rails.

Four Days on Rails is an impressive 40-page eBook that provides a handy toolbox for Rails development.

Rails Envy gives an argument in favor of the Rails framework.

A "storytelling" example on the effectiveness of Rails in web applications. 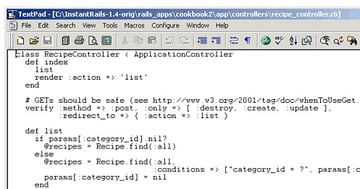 7. Fast-track your Web apps with Ruby on Rails

Fast-track your Web apps with Ruby on Rails is a somewhat dated but excellent overview of how the web framework works.

If you're not familiar with the Ruby language, check out Ruby Study Notes, a web-based tutorial on the basics of Ruby.

The official Ruby site has a quickstart that will get you well underway into Ruby programming.

Dev Articles has a quick look at Ruby Loops, Methods and Blocks.

A tutorial on how to create a simple to-do list with Rails. (Note: it's slightly dated so be aware of when the advice goes against current best practices - still a useful exercise though.)

This quick guide shows how to use Rails' mailer functionality to send emails within a web application.

A great starting point for learning how things like Rails and the MVC framework can be a great thing for a designer.

How to use Paperclip to swiftly attach images to an Event in Rails.

16. How to Use Gmail as Your Mail Server For Rails

An excellent primer on the types of security attacks your Rails app might encounter, and how to combat them.

Sorting table data is incredibly useful for most data-heavy applications. Nozav.org has put together a comprehensive guide on how to make a sortible AJAX table in Rails, complete with a demo application.

A 2-part series on converting video in a Rails app with the FFMPEG.

Everything you'll need to know about packing and distributing Rails applications with Tar2RubyScript and RubyScript2EXE.

A dated but fundamentally useful overview on how to use Ajax technologies with the Rails framework.

An episode from the excellent Railscasts site going over how to use jQuery in a Rails application.

25. Dropping and Sorting with Ajax and Scriptaculous

A quick tutorial on creating a drag-n-drop interface in Rails and the popular Javascript framework Scriptaculous.

A screencast on how to create a text field auto-complete experience, much like Google's newly-revamped search functionality.

27. Getting Started with Instant Rails on Windows (screencast)

O'Reilly media has a nice 17 minute video primer on RoR for Windows users.

A slightly more advanced tutorial that focuses on making complex forms without unwieldy controllers. The tutorial has two other parts that build on the first. (Part 2, part 3)

The basics on creating a plugin with the Rails API. The tutorial is very extensive and thorough.

Railscasts has another excellent episode on how to integrate Paypal into your application for handling money transactions.

If you're wanting to roll your own money processing system and use something other than Paypal, then you might want to try Active Merchant, a payment processing library for Rails Screencasts has an Active Merchant Basics, complete with source code.