Last week we looked at 22 Neat Editors for Windows. But sometimes, a code editor simply isn't enough, especially when you're working with things like databases and classes. Which IDE will you prefer? Hopefully you'll find it below! 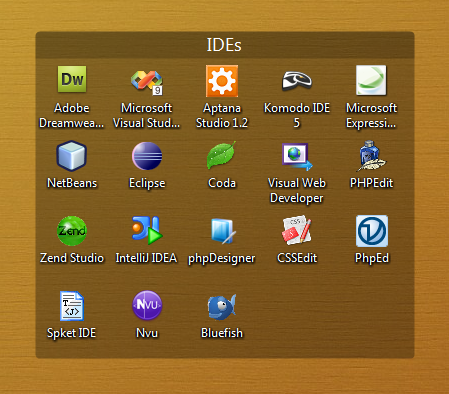 Instead of sticking with Windows applications, I've opened it up to all three major platforms: Windows, Mac, and Linux. There are a few IDEs here that will only run on one OS, but you'll find that most have a version for all three. 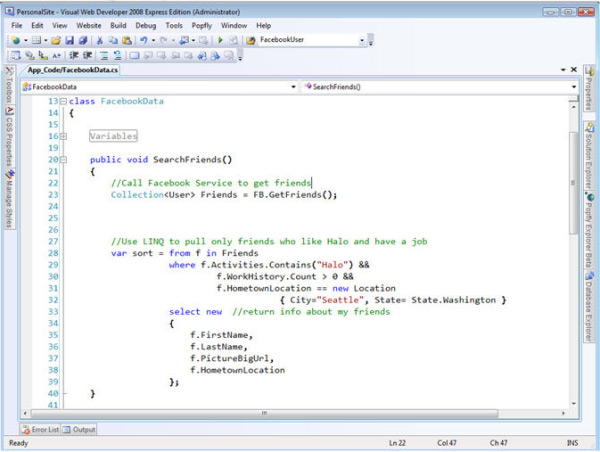 Visual Web Developer is basically a stripped down version of Visual Studio, with only the web development tools in place. It has the same great project management and database tools that VS has, only it costs $299 less. This app is aimed at beginners, so you can get starter kits along with it, and there's a great Beginning Developer Learning Center online. 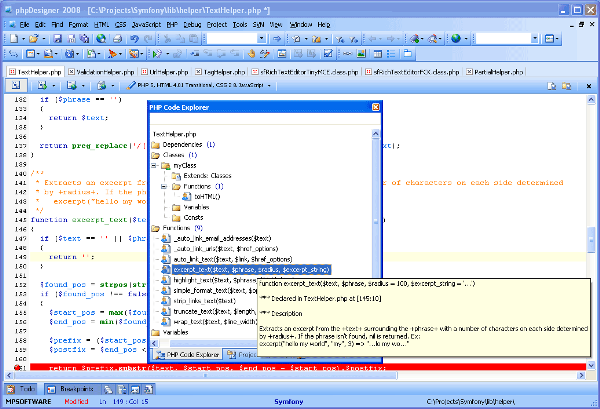 www.phpeditors.com gave phpDesigner a 5 star rating, saying it was a "super fast PHP IDE with many features." To back this up, phpDesigner offers support for PHP debugging and profiling; It also supports all standard web languages, and offers TortoiseSVN support, and live error detection for PHP, HTML, and CSS. A code snippets library and built-in PHP manual for beginners only sweeten this pot. 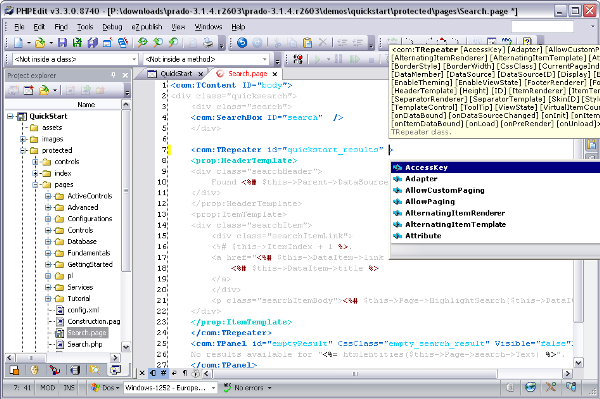 PHPEdit is a pretty good PHP IDE; it offers the debugging (even a Firefox debugging plug-in) and database support (easy query building and data visualizing) that you would expect, along with time-saving keyboard templates that allow you to quickly set up your PHP code structure. With PHPEdit, it's pretty easy to connect to a server and use all the features, including auto-suggestion and -completion, with remote files: PHPEdit takes care of all the downloading and uploading for you. 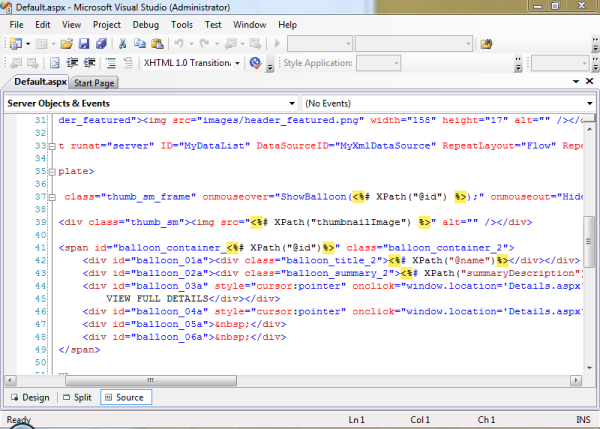 Visual Studio is basically the industry standard for writing .NET code, but it's also good for web development. It's strong point is ASP .NET (obviously), but it's pretty good with traditional web languages, offering extensive "IntelliSense" (code completion) for HTML, CSS and JavaScript. There's no native PHP support, but there is a plug-in of sorts that can add it (Rumour has it that VS 2010 will support PHP). The code debugger is amazing if you're using ASP .NET, and now you can debug JavaScript as well. Visual Studio has so many more powerful features; it's a good product for anyone who uses ASP .NET.

Expression Web is a pretty neat application. It offers tons of CSS support, turning creating and applying your styles into a graphical experience. Of course, if you prefer writing code, it has the IntelliSense of Visual Studio for CSS, as well as HTML. As you'd expect, there is ASP.NET support, but there's also PHP support. Another neat feature: Expression Web takes note of which doctype you're using and lets you know if you're not keeping the rules; it's basically built-in, real-time (X)HTML validation.

Bonus: Recently, Microsoft came out with Expression Web SuperPreview, a tool that helps you preveiw your websites in multiple versions of Internet Explorer without having to install them all. You can check out your site in IE6, IE8 or IE8 in compatibility mode, or you can compare a live site to an image. The neatest part is that you can overlay two versions to see inconsistencies. 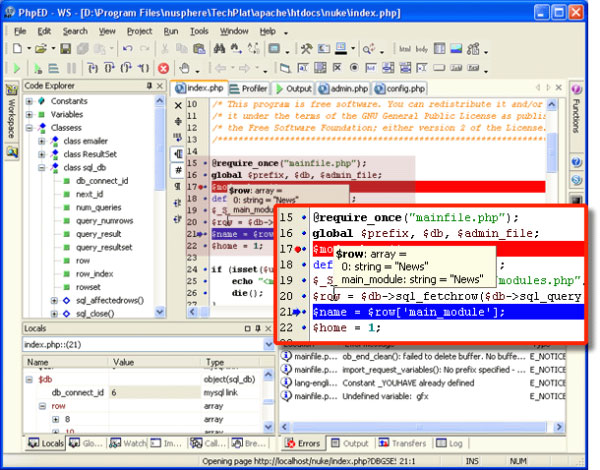 PhpEd comes with built in PHP, HTML, and CSS validators. It has code completion for those languages as well; and of course, there's PHP debugging and profiling. PhpEd has one innovative feature that I haven't seen before: dynamic syntax highlighting. Imagine a scenario where you have multiple languages in the same file (not really plausible coding, but understandable with HTML and PHP at least): if dynamic syntax highlighting is on, only the language your cursor is on with be highlighted; all the other code will appear as normal text.

Coda may be the best IDE for the Mac, and it's one of the few IDEs created with the sole intent of web development. Its concept of sites is pretty neat, and you can remotely edit files on almost any server. With the ability to collaborate on file with anyone in the world, and a clips repository for frequently typed snippets, Coda really looks promising. By the time you have a Javascript console, Dom inspector, CSS editor, and built-in terminal, you're looking at an application that would make me consider switching to a Mac.

An IDE for CSS? That's right, and an amazingly slick one at that. With built in validation, "Milestones" (Code versioning), and a really neat selector builder, writing CSS is a snap with CSSEdit. And then there are tools that let you inspect other websites to see how it's done. This tool is great for both CSS newbies and veterans. 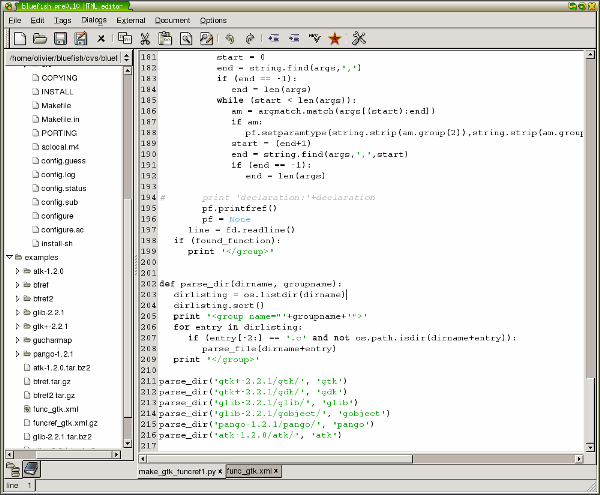 Bluefish aims to be a light and clean IDE for linux users. It offers project support, as well as the ability to access remote files on almost any server. It has very robust search and replace, code completion for HTML and XML, and a function reference browser for PHP, CSS, Python, and HTML.

Integrate external programs such as make, lint, weblint, xmllint, tidy, javac, or your own program or script to handle advanced text processing or error detection. Integrate external filters of your liking, pipe your document (or just the current selected text) through sort, sed, awk or any custom script. 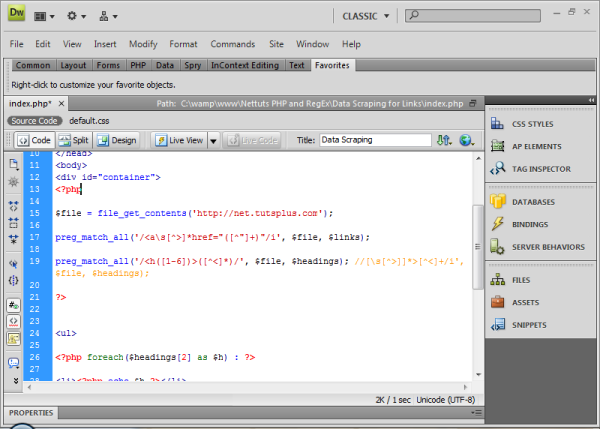 For those who love the other Creative Suite applications, Adobe's Dreamweaver will be perfect; it integrates very well with PhotoShop. It's a great editor for JavaScript, offering code hints and JS framework integration. It offers interesting CSS support: you create CSS rules and Dreamweaver explains how it will fit in with other rules. Then, Live View enables you to preview your coding without leaving the program. Dreamweaver may also win the asthetic beauty contest in today's roundup . . . at least for Windows! 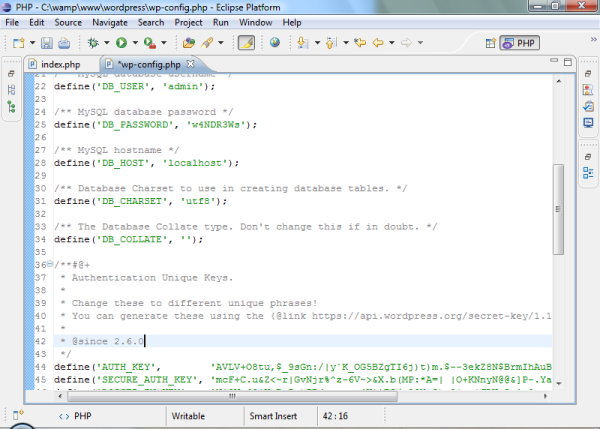 Eclipse is a very powerful IDE, that can do almost all things programming through its plugins. I downloaded Eclipse with the PHP Development Tools, which may be a good idea if you don't already have Eclipse. This offers PHP debugging, as well as syntax highlighing and some code completion. Eclispe can also support JavaServer Pages, and using a CVS repository.

Aptana Studio could be described as Eclipse for web development only. It's available as either a standalone app or as a plug-in for Eclipse, and it claims to be "The Leading IDE for Web App Development." With plug-ins, you can have support PHP, Ruby on Rails, Java, and more. It also has support for Libraries like jQuery, Prototype, YUI, and others, making your development process easier. SQL database tools, JavaScript debugging, it's all there; the only thing I dislike about Aptana is that it takes forever to open on my computer; no, it's not the computer: I can open two instances of Visual Studio in the time it takes Aptana to open. Aptana (the company) also offers hosting for your projects, so if you use that service, the IDE ties those services in perfectly. 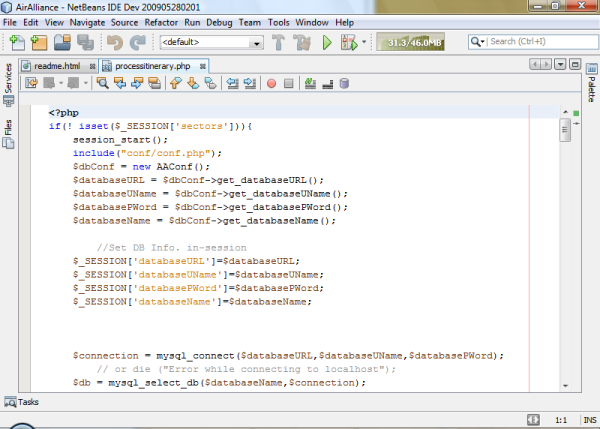 This open-source IDE is a sweet deal: whether you're developing in PHP, Ruby on Rails, JavaScript, or something else, you'll find rich editing features, as well as support for FTP and MySQL. At least with PHP, it offers light on-the-go debugging, alerting you to errors as you type. Netbeans also has a nice code navigator, and offers code completion and integrated documentation for frameworks like jQuery and Mootools. 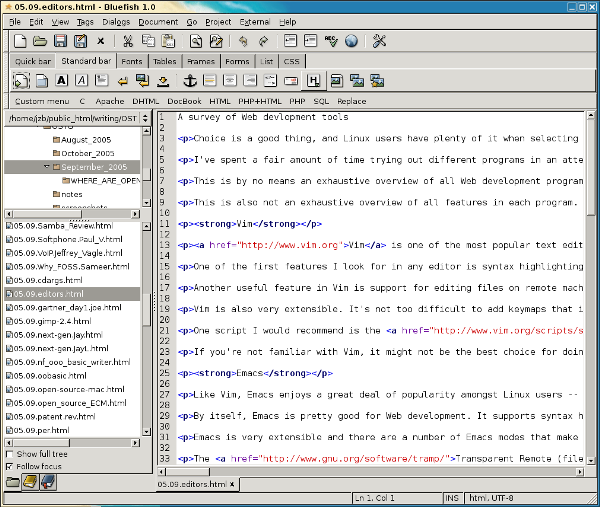 Nvu (pronouced N-view for "a new view") markets itself as a free alternative to programs like Dreamweaver and Expression Web. It's aimed at beginners and offers a strong WYSIWYG editor, but you can definitely hand-code. For advanced users, Nvu can be extended with "a dash of JavaScript." 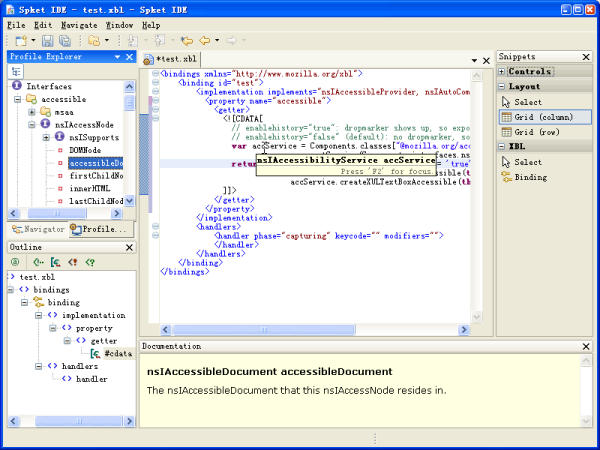 Spket claims to be especially for RIA development. It offers code completion for Javascript and Flex, not to mention support for a number of JavaScript libraries. It has a content outline view that will let you examine the logical structure of your scripts. It also includes features for Silverlight development, including XAML completion and code completion for JavaScript based on the Silverlight Object Model. Then, there's support for SVG and XUL. 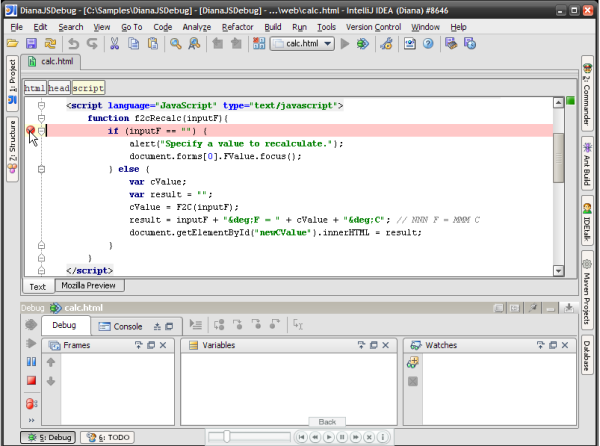 Although IntelliJ IDEA is primarily aimed at Java developers, it has support for a lot of technologies used on the web, from HTML to JavaScript, Flex, and SQL. It offers JavaScript debugging and refactoring, as well as code completion and a structure view. Similar features are available for Flex developers as well. For (X)HTML, IntelliJ IDEA has code inspection that will alert you to browser compatibility errors, and apparently even direct you to a www.quirksmode.org bug report for more information.

Komodo IDE is a made especially for "dynamic languages and open technologies." Besides the standard web languages—HTML, CSS, JavaScript, PHP, and so on—it also supports Ruby, python, Tcl, and more. It's got a solid editor, with code tips and a bit of auto-completion. The debugger works well, and the program is extensible; there's even a pretty neat snippets feature that helps you keep your code well documented and a regular expression tester.

Note: I overlooked Komodo IDE's free little sister, Komodo Edit in last week's roundup. This was unintentional, as I hadn't really seen it before. From the comments and what I've seen, it looks like a pretty good code editor, so I'm going to have to check it out!

Zend Studio is an Eclipse plug-in, but it's really an IDE in itself. It's aimed mainly at PHP development (with an obvious focus on the Zend Framework), and it's got a ton of features. It offers real time error detection, and plenty of database support, (S)FTP, local and server debugging, code refactoring, and source code control options . Of course, it also supports JavaScript and HTML with syntax highlighting and code assist.

While researching for this article, I found an interesting article: "Seven great PHP IDEs compared"; although the main part of the article looks at a few PHP IDEs, I found the section "What is an IDE?" rather interesting.

Like last week, I might have left out your favourite IDEs. If I did, let me know! If not, which IDE do you use?

Andrew Burgess
Hi! I'm Andrew Burgess, and I'm a connoisseur of all things programming. I'm from near Toronto, Canada, and I've been fooling around with computers for nearly my whole life, both hardware and software. Right now, I'm finishing up a computer science degree. For almost a decade now, I've been playing around with over a dozen programming languages on several different platforms, from JavaScript to Java, from Ruby to Befunge. My favourite has always been JavaScript. I've always enjoyed writing, so when I discovered Tuts+ in 2009, I was excited to start writing tutorials. Since then, I've been writing tutorials and producing screencasts for Tuts+. Right now, I'm a course instructor and I produce mostly JavaScript-related courses. Maybe you've seen Building a Web App from Scratch with Angular.js or Node.js from Scratch; that's me! I've also written a few ebooks, like Getting Good with Git, Getting Good with JavaScript, and, more recently, Backbone.js Blueprints.
andrew8088
Weekly email summary
Subscribe below and we’ll send you a weekly email summary of all new Code tutorials. Never miss out on learning about the next big thing.
Advertisement
Translations